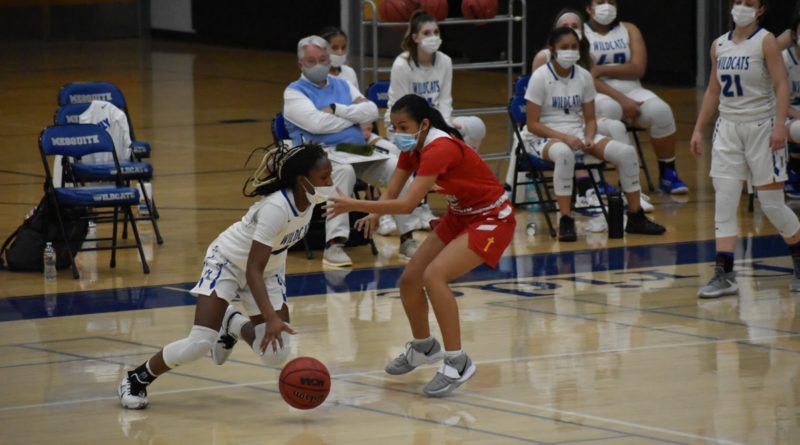 Below is a list of top girls basketball performances for the week of Feb. 15-21. If you know of a player we should add to this list or include in a future week, email brittanyabowyer@gmail.com. Follow her on Twitter at @bbowyer07.

Against Salpointe Catholic on Saturday, the sophomore led the team in scoring with 18 points and collected five rebounds, four assists and two steals in a 59-55 loss.

Making her first appearance on the list, Arave had her best game of the season Tuesday, posting a double-double with 22 points and 16 rebounds to help lift the Volunteers to a 36-24 victory over Bradshaw Mountain. The sophomore then posted 22 points, eight rebounds, two assists and a steal in a 40-35 victory against the Bears on Friday.

Badger, a junior, led the team in scoring with 21 points in Tuesday’s 65-37 victory over Shadow Mountain. She also had five assists, four rebounds and four steals to help power the Broncos to victory.

It was another outstanding week for Brown, who opened things Tuesday by posting 32 points and 17 rebounds. The senior’s double-double accounted for more than half of the points and rebounds for the team in its 53-29 victory over Cienega. Thursday was arguably her best game yet, though, as she dropped 47 points and 15 rebounds to help lift the Cougars to an 85-55 victory against Catalina Foothills.

In just the third game of the season for the Falcons, the sophomore was absolutely dynamic, racking up 25 points, three rebounds and three assists in a 63-56 loss to Tucson on Monday.

The sophomore is continuing to have a phenomenal season, posting 25 points, five assists and four steals in a 58-50 victory over Combs on Wednesday.

Clark, a sophomore, racked up a double-double with 20 points, 14 rebounds and three steals in Monday’s 63-56 loss to Tucson. She had 27 points Thursday in an 85-55 loss to Sahuaro.

The junior posted a double-double with 18 points and 14 rebounds, along with four assists and four steals, to help defeat Coronado 60-42 on Friday.

In the Mustangs’ 56-48 win over Millennium on Friday, the junior had 19 points and five rebounds.

The senior and Washington Huskies commit notched a double-double with 23 points and 16 rebounds, along with three assists and three steals, to help propel the Monsoon to a 61-30 victory over Desert Vista on Monday.

In Thursday’s game against Cienega, the senior had her best game of the season with 23 points and four rebounds.

With 18 points in a 56-48 victory over Millennium on Friday, the senior also became one of the newest members of the 1,000 career points club.

In her best game of the season, the sophomore had 22 points, five steals, four rebounds and three assists in a 75-23 victory over Willow Canyon on Tuesday.

It was another outstanding week for the senior, who opened things with 30 points, six rebounds, four assists and three steals in a 67-35 victory over Moon Valley on Tuesday.

The senior her best game of the season against Cactus on Friday with 18 points, six steals, five rebounds and two assists to help lift the Cougars to a 60-27 victory.

Franks is back on the list after her standout performance against Desert Mountain on Thursday, when the senior led both teams in scoring with 23 points in a 62-33 victory. She added five steals, three assists and two rebounds.

In Monday’s 63-60 loss to Amphitheater, the senior had an absolutely phenomenal game, posting a double-double with 27 points and 26 rebounds. She had four blocks, three assists and three steals.

Graber, a senior, dominated across the court Saturday, leading both teams in points and rebounds with 16 and 20, respectively, in the Trojans’ 49-43 loss to Horizon.

The freshman led Millennium in scoring Friday with 25 points despite the Tigers’ 56-48 loss to Sunrise Mountain.

Back on the list again with another double-double, the junior had 29 points, 20 rebounds and eight steals in a 64-19 win over Kofa on Thursday.

Heath, a junior, is back on the list after posting 20 points in the team’s 68-39 loss to Flagstaff on Wednesday.

In her best game of the season so far, the junior had a double-double with 20 points and 14 rebounds to help Verrado secure a 56-33 win over Williams Field on Tuesday.

The senior had 30 points in Valley Lutheran’s 72-0 victory over Heritage Academy on Saturday.

In Thursday’s 50-26 victory over Sunnyslope, the sophomore had 21 points, eight steals, five assists and four rebounds.

Back on the list this week is Johnson, a senior who had 23 points, seven rebounds, four steals and two assists in a 75-35 victory over Raymond S. Kellis on Tuesday.

The sophomore posted a double-double of 19 points and 13 rebounds, leading the team in both categories and helping the Panthers secure a 61-10 victory over rival Cactus High on Thursday.

In a 60-39 victory over Horizon on Thursday, the sophomore led the team with 19 points, three rebounds, three assists and two steals.

Lyle had an explosive game Wednesday against Vista Grande with 30 points and 11 rebounds to help lift the Sabercats to a 71-41 victory. The junior followed with another double-double in Thursday’s 56-52 win over McClintock with 18 points and 15 rebounds.

In a 67-44 victory over Pueblo on Tuesday, the sophomore led the team all over the court with 15 points, 19 rebounds, four assists and four steals.

Moreno makes another appearance on the list after her best game of the season Tuesday against Saguaro. The senior posted 25 points, eight rebounds, five steals and two assists in a 58-53 loss to Saguaro.

In Thursday’s 77-31 victory against Cortez, the senior had a double-double with 20 points and 12 rebounds.

The senior led both teams in scoring Saturday with 19 points despite the Chargers’ 65-48 loss to Cactus Shadows.

The sophomore had another strong game against Leading Edge Academy, posting 20 points, six rebounds and three steals to help the Pumas secure a 65-40 win.

The junior posted an insane double-double of 34 points and 24 rebounds Tuesday in a 64-32 victory over Marcos de Niza.

The junior led the team with 22 points, five assists and five steals in a 58-48 loss to Seton Catholic Prep on Wednesday. She reached 1,000 career points in the game.

In Monday’s 65-40 loss to Perry, the senior led the team in scoring with 20 points and pulled down nine rebounds.

In Saturday’s 49-29 victory over Coronado, the senior led her team with 19 points, four steals, four assists and two rebounds.

Thomas and Kogbara teamed up to become an unstoppable duo, each with a double-double in the 62-10 victory over Cactus on Tuesday. Thomas, a junior, was right behind her teammate with 18 points and 10 rebounds.

Making her first appearance on the list, the junior had arguably the best game of her high school career with a triple-double in a 63-60 win over Walden Grove. Vital had 22 points, 11 steals and 10 rebounds, accompanied by eight assists and three blocks.