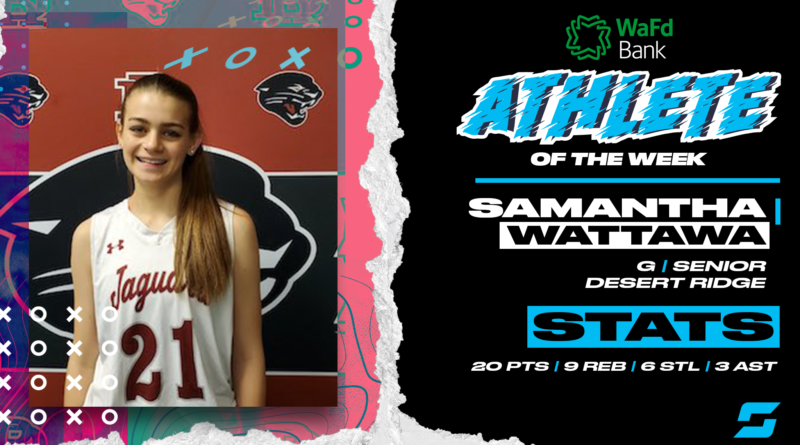 The senior led the team in scoring in Tuesday’s 44-36 victory over Mountain Pointe with 20 points, nine rebounds, six steals and three assists.

Wattawa received 63.99% of the vote, beating out Millennium’s Elli Guiney who finished second with 33.35%.

Milinda Arguellez, Flowing Wells: As Flowing Wells opened the season Tuesday, the senior had an explosive game with 25 points, six rebounds, six assists and four steals in a 61-30 victory over Rio Rico.

Alyssa Brown, Sahuaro: As Brown continues to chip away at the list of all-time scorers, she’s had back-to-back explosive performances. On Wednesday, the senior had a double-double with 28 points, 10 rebounds, six blocks, five assists and four steals in a 67-13 win over Ironwood Ridge. On Thursday, she had another incredible double-double with 44 points, 14 rebounds and seven steals in a 93-42 win over Casa Grande.

Reilly Clark, Catalina Foothills: The sophomore has emerged as a leader for Catalina Foothills in its first two games of the season, most notably in Wednesday’s season opener against Casa Grande. She posted 27 points, eight rebounds and three steals to help lift the Falcons to a 60-44 win.

Londyn Cunningham, Combs: In Combs’ 49-44 victory over Vista Grande on Friday, the senior had 20 points, 10 rebounds and four assists.

Hollie Dalton, Prescott: The senior had back-to-back games with double-doubles last week, with 22 points, 11 rebounds, six steals and six blocks in Tuesday’s 39-33 victory over Mingus, and 17 points and 12 rebounds in Friday’s 65-23 loss to Flagstaff.

Emily Davis, Snowflake: The junior had a season-best game Tuesday in a 61-21 victory over Blue Ridge, recording a double-double with 20 points and 10 rebounds.

Kilah Fowler, Poston Butte: The sophomore had the best game of her varsity career Friday in an 83-51 win over Coronado. She had a game-high 31 points and eight rebounds.

Autymn Franks, Casteel: The senior posted 20 points to lead the team in scoring in a 60-14 win over Higley on Thursday. She also had eight deflections, six steals, five assists and three rebounds.

Katy Frost, Sandra Day O’Connor: The sophomore had a double-double in a 42-30 victory over Boulder Creek on Tuesday with 17 points and 14 rebounds.

Rachael Grapevine, Coronado: The senior had her best game of the season Friday, posting 25 points, five rebounds and four steals in an 83-51 loss to Poston Butte.

A’nya Harper, Buckeye: The senior is absolutely dominating in the rebounds category this season. She led the team in rebounds with 25 while posting 11 points to secure a double-double in a 56-45 loss to Dysart on Tuesday.

Kennedy Harper, Estrella Foothills: The senior posted a double-double with 22 points, 15 rebounds, five deflections and two steals to help lift the Wolves to a 63-58 victory over Paradise Honors on Tuesday.

Kamariah Hawkins, Yuma: The junior scored more than half of her team’s points with 23 and dominated the paint with 20 rebounds to earn a double-double in Yuma’s 58-43 loss to Youngker on Tuesday.

Kaisha Henry, Verrado: The junior secured a double-double with 19 points, 17 rebounds and five steals in a 74-12 victory over Lake Havasu on Tuesday.

Jennah Isai, Valley Vista: In her final game of the season before undergoing surgery, the junior led the team in scoring with 20 points and added eight steals, two rebounds and two assists in Thursday’s 75-41 win over Pinnacle.

Daeja Johnson, Casteel: Making the list once again is Johnson, this time for her explosive performance against Casa Grande on Tuesday. The senior led both teams in scoring with 32 points and added 11 rebounds and seven steals in a 74-44 win.

Myna Johnson, Cibola: The junior had an outstanding week. On Tuesday, Johnson posted 24 points, seven assists and six steals in an 86-18 victory over San Luis. She was named Player of the Game on Thursday in a 34-31 loss to Desert Ridge, tallying 16 points, three assists and two rebounds before posting 22 points, eight assists and four steals in Friday’s 92-2 blowout of Kofa.

Nyese Jones, Westwood: The junior helped lift the Warriors to a 68-66 victory over Apollo on Thursday with 20 points, seven steals, four rebounds and two assists.

Britany Kogbara, Peoria: As just a sophomore, Kogbara is a rebounding machine for the Panthers. She had an outstanding performance Thursday against St. Mary’s with 17 points and 28 rebounds, despite the 52-40 loss. In nine games, Kogbara is averaging nearly 20 rebounds per game.

Acacia Melvin, Combs: The junior led the team in scoring while posting a double-double with 18 points and 12 rebounds in Tuesday’s 58-28 victory over Cortez.

Haley Montano, Desert Edge: The senior posted a double-double with 20 points and 10 rebounds in a 47-39 win over Peoria on Tuesday.

Marlene Moreno, St. Mary’s: The senior led the team in scoring with 22 points and added 11 rebounds, two assists and a steal in Thursday’s 52-40 victory over Peoria.

Dominique Nesland, Xavier Prep: The freshman had a breakthrough game for the Gators against Tucson on Friday in a 77-26 victory, notching her first double-double of her high school career. She led the team in scoring with 20 points and added 11 steals.

Alessandra Segundo, Sahuarita: The junior opened the season for Sahuarita with 20 points, seven steals and three rebounds in the Mustangs’ 47-21 win over Walden Grove on Monday.

Hope Sumner, Dysart: Sumner, a senior, had a double-double to help lift Dysart to a 56-45 win over Buckeye on Tuesday with 12 points and 16 rebounds.