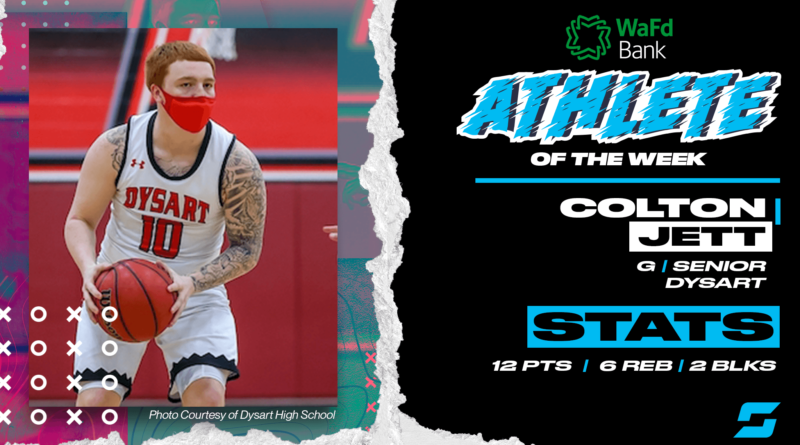 Jett, a senior, had 21 points (five three-pointers) and five assists to help lift the Demons to a 65-45 win at Saguaro on Wednesday, Jan. 27.

Jett received 59.67% of the vote, beating out Paradise Honors’ Jalen Scott who finished second with 35.22%.

Here are the other athletes who were nominated for the week of Jan. 25-31:

Travalle Beckwith, Poston Butte: The senior led Poston Butte in scoring and rebounding Tuesday with 24 points, 12 rebounds and five steals in a 68-65 victory over Cortez.

Bailon Black, Ironwood: Black, a senior, had 31 points and eight assists Monday to help lift the Eagles to a 95-74 win over Pinnacle.

Shay Cain, Desert Edge: The senior dropped 24 points and added 15 rebounds, six assists and five steals in a 55-50 win over Cactus on Friday.

Colin Carey, Sunrise Mountain: Carey, a senior, had 29 points to lift the Mustangs to a 63-59 win over Peoria on Monday.

Tanner Crawford, Mesa: The senior had 23 points and 22 rebounds in Mesa’s 65-32 win over Westwood on Friday.

Tony Elliott, Desert Mountain: The senior had 21 points, including the winning basket, and six rebounds to lead the Wolves to a 52-51 win over Cactus Shadows on Tuesday.

Coleman Fields, Millennium: The senior led the team in scoring with 21 points and tallied eight rebounds, three assists and three steals Tuesday in an 89-21 blowout of Lake Havasu.

Jamison Kay, Gila Ridge: The senior had 20 points, six rebounds and four assists in a 64-50 win over Sunrise Mountain on Tuesday.

Daryian Matthews, Dysart: Matthews has established himself as one of the most valuable big men in the state. On Tuesday, the senior posted 20 points and 25 rebounds in a 67-50 victory against Youngker.

Rowan McKenzie, Boulder Creek: Only a freshman, McKenzie secured a double-double against Mountain Ridge with 23 points, 10 rebounds and four steals in Friday’s 74-72 loss.

Tanner Pate, Mountain Pointe: The junior had 29 points in the Pride’s 107-56 win over Maricopa on Thursday.

Dylan Pendleton, Coronado: The senior had a double-double in Wednesday’s 47-33 loss to Tempe, putting up more than half of Coronado’s points with 20, along with 11 steals and six assists.

Eric Ramirez, Cibola: The senior had 27 points, seven rebounds, three assists and four steals in an 83-44 victory over Kofa on Thursday.

Brady Ramon, Salpointe Catholic: The senior helped the Lancers move to 2-0 with 26 points, 10 rebounds and three assists in Thursday’s 74-64 win over Marana.

Jalen Scott, Paradise Honors: With 20 points and 10 rebounds, the senior’s double-double helped lift Paradise Honors to a 72-54 win over Dysart on Friday.

Pike Tancil, Willow Canyon: The junior recorded a triple-double with 25 points, 11 assists and 10 rebounds against Independence on Friday in a 100-35 victory.

Merhauti Xepera, Maricopa: Xepera, a junior, had 30 points and nine rebounds in an 87-76 loss to Skyline on Friday.