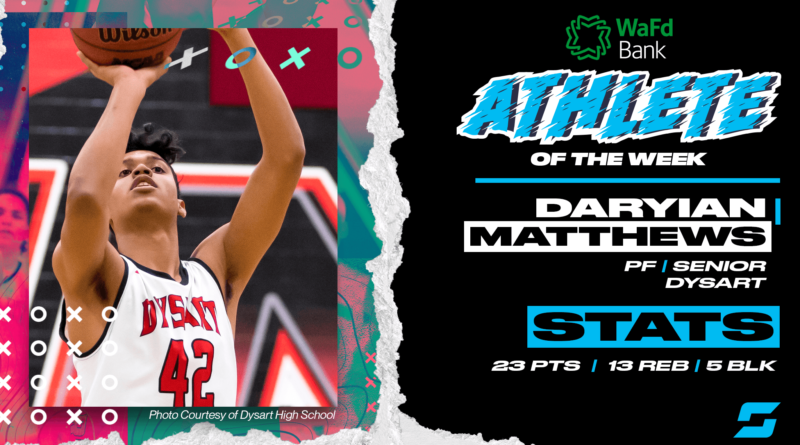 The senior forward had 23 points, 13 rebounds and five blocks in the Demons’ 58-47 loss against Estrella Foothills on Friday, Jan. 22.

Matthews received 47.61% of the vote, beating out Saguaro’s Kamden Sekaquaptewa who finished second with 29.82%. Peoria’s Andrew Camacho finished third with 18.74%. There were over 18,000 votes tallied this week!

Here are the other athletes who were nominated for the week of Jan. 18-24:

Noah Amenhauser, Estrella Foothills: The sophomore had back-to-back explosive games, racking up 25 points against Buckeye on Tuesday (a 62-49 win) and 27 points against Mesquite on Wednesday (a 56-55 victory).

Andrew Camacho, Peoria: In the Panthers’ first two games, the sophomore has been absolutely explosive offensively, dropping 20 points in Tuesday’s season-opening 71-34 win over Notre Dame Prep and a career-high 40 points Friday in an 83-70 victory against Cactus.

Tanner Crawford, Mesa: The senior averaged 17.5 points and 11.5 rebounds in the Jackrabbits’ two victories, 74-38 over Red Mountain on Tuesday and 55-39 over Mountain View (Mesa) on Friday.

Miles Guliford, Liberty: The senior had 22 points in the Lions’ 86-54 win over Chaparral on Friday after putting up 19 points in a season-opening 91-63 victory against Boulder Creek on Tuesday.

Aadem Isai, Valley Vista: The sophomore had 23 points in a 63-62 loss to Chandler on Wednesday in the Capital City Tip-off Classic.

Brandon Jackson, North Canyon: The senior, who started the petition for the AIA to reverse its decision regarding winter sports, showed just how thankful he is for the chance to play by dropping 32 points in the Rattlers’ 65-61 season-opening win against Glendale on Tuesday.

Carter John, Bradshaw Mountain: John, a senior, put up 25 points as the Bears opened their season with a 67-50 victory against Prescott on Tuesday.

Carson Kelly, Chandler: The senior has appeared in only two of the Wolves’ four games, but he’s averaging 25.5 points in those games. He was essential in Chandler’s 63-62 comeback win over Valley Vista in the Capital City Tip-off Classic on Wednesday, returning to the court after taking a hard fall on his head early in the fourth quarter and finishing with 26 points.

Nick Riley, Chandler: The senior is averaging 17.3 points and 10.3 rebounds through four games. He had 24 points and 11 rebounds in the Wolves’ 72-31 win over Maricopa on Thursday.

Kamden Sekaquaptewa, Saguaro: The senior opened the season with 13 points in a 63-56 win against Marcos de Niza on Tuesday before scoring 20 points in a 62-49 victory over Mingus on Wednesday and 21 points in a 77-63 win over Goldwater on Saturday to help the Sabercats move to 3-0.

Raydon Thorson, Queen Creek: The junior dropped 20 points and dished out eight assists for the Bulldogs in Tuesday’s 69-62 loss to Mountain Pointe.

CJ Wiggins, Gila Ridge; Wiggins, a senior, put up 18 points with 13 rebounds to help lead the Hawks to a 74-55 win over Raymond S. Kellis on Tuesday.