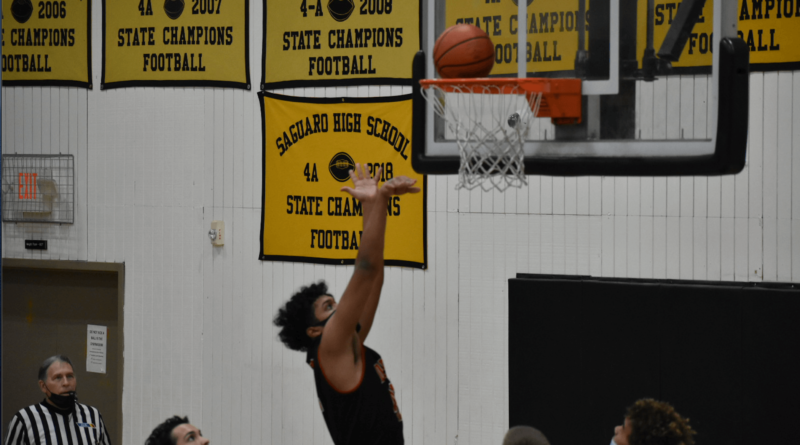 Below is a list of top boys basketball performances for the week of Jan. 25-31. If you know of a player we should add to this list or include in a future week, email brittanyabowyer@gmail.com.

On a team stacked with shooters, the junior was the star Tuesday in Ironwood’s 84-38 rout of Raymond S. Kellis. Aguek tallied 29 points, five rebounds, two steals and two assists.

The senior led Poston Butte in scoring and rebounding Tuesday with 24 points, 12 rebounds and five steals in a 68-65 victory over Cortez.

Black, a senior, had 31 points and eight assists Monday to help lift the Eagles to a 95-74 win over Pinnacle.

The senior dropped 24 points and added 15 rebounds, six assists and five steals in a 55-50 win over Cactus on Friday.

The senior had 21 points, including the winning basket, and six rebounds to lead the Wolves to a 52-51 win over Cactus Shadows on Tuesday.

The senior led the team in scoring with 21 points and tallied eight rebounds, three assists and three steals Tuesday in an 89-21 blowout of Lake Havasu.

Jett, a senior, had 21 points (five three-pointers) and five assists to help lift the Demons to a 65-45 win at Saguaro on Wednesday.

The senior had 20 points, six rebounds and four assists in a 64-50 win over Sunrise Mountain on Tuesday.

Matthews has established himself as one of the most valuable big men in the state. On Tuesday, the senior posted 20 points and 25 rebounds in a 67-50 victory against Youngker.

Only a freshman, McKenzie secured a double-double against Mountain Ridge with 23 points, 10 rebounds and four steals in Friday’s 74-72 loss.

The junior had 29 points in the Pride’s 107-56 win over Maricopa on Thursday.

The senior had 30 points Friday to help Florence secure a 72-64 victory over San Tan Foothills.

The senior had a double-double in Wednesday’s 47-33 loss to Tempe, putting up more than half of Coronado’s points with 20, along with 11 steals and six assists.

Perry, a senior, had a team-high 33 points, five steals, five assists and four rebounds Tuesday in the Panthers’ 78-44 win over Barry Goldwater.

The senior had 27 points, seven rebounds, three assists and four steals in an 83-44 victory over Kofa on Thursday.

The senior helped the Lancers move to 2-0 with 26 points, 10 rebounds and three assists in Thursday’s 74-64 win over Marana.

With 20 points and 10 rebounds, the senior’s double-double helped lift Paradise Honors to a 72-54 win over Dysart on Friday.

The senior led Liberty in scoring Tuesday with 21 points and added seven steals, four rebounds and two assists in a 73-62 win over Sandra Day O’Connor.

The junior recorded a triple-double with 25 points, 11 assists and 10 rebounds against Independence on Friday in a 100-35 victory.

Xepera, a junior, had 30 points and nine rebounds in an 87-76 loss to Skyline on Friday.