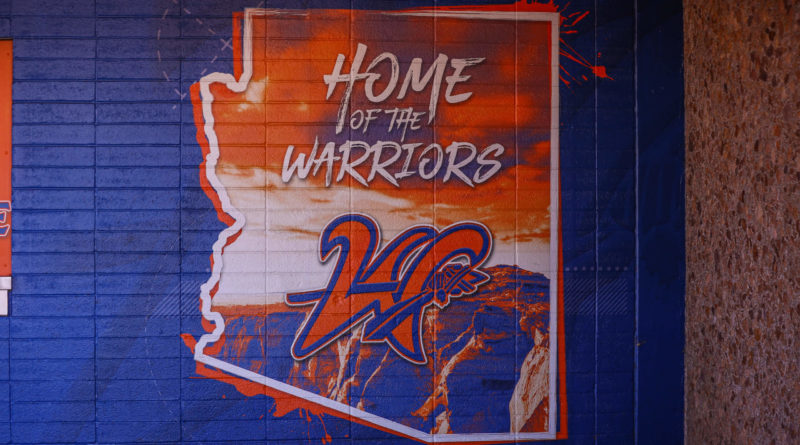 Over the next few weeks, SBLive Arizona will break down every 6A boys and girls basketball team in the state entering the 2020-21 season. Here’s our look at the Westwood Warriors boys of the 6A East Valley.

Richardson has been battling back issues. He’ll need a strong back, as he carries the weight of heightened expectations this season. He averaged five points, four rebounds and two assists per game as a junior. “He brings the most experience to the team and has a chance to be our leading scorer,” Powell said. “He’ll be the one we look to when we need a big bucket who can knock it down. We need him to be a good rebounder, too, in order for us to have any success.”

Baptiste led the team in assists (3.5 per game) and steals (two) while averaging seven points and four rebounds last season, and he might also have led the team in hustle points and effort. “Bryce has a real high motor,” Powell said. “He’s a good on-ball defender who can defend the whole court and apply good pressure.”

Diaz-Medina (five points, five rebounds, 1.5 assists per game) also played heavy minutes for the Warriors last winter and brings stability and experience — as well as a deep shooter — to the team. “He can stretch the floor for us,” Powell said. “He’s just a real solid player.”

Brantley moves up from the JV team and can play either guard spot for Powell, who called him the team’s most athletic player. “He’s a great defender who can get out and disrupt the passing lanes,” Powell said. “He will really help us defensively.”

Wright is another JV player moving up to varsity who will join Diaz-Medina in spacing the floor. “He’s been our most consistent three-point shooter in practice,” Powell said. “I’m looking forward to him being that three-point threat that we will need because of our size.”

Coming off the program’s first winning season since 2007-08, the Warriors got off to a 4-4 start last winter before faltering down the stretch, dropping five of their last seven to miss the playoffs.

One advantage the Warriors have is experience. They return a veteran quartet of players led by Richardson and Baptiste who they’ll rely upon during the shortened season.

“This year will be a sprint, and hopefully that leadership and experience will translate into opportunities to knock some teams off,” Powell said.

With Richardson the tallest player on the roster at 6-3, Powell hopes his team can create matchup problems with their quickness and three-point shooting from Diaz-Medina, Wright and much-improved 5-11 junior Jaxon Johnson to overcome the team’s lack of size. Senior Mohiah Brown (three points, four rebounds per game last season), a 5-10 forward, adds experience and a reliable role player off the bench.

“This is definitely going to be a team that relies on the team. Not only are our bigs small, but our guards are small, too. But, we can’t use that as an excuse. We need to use that to our advantage the best we can, try to play in space and get bigger defenders out to guard us, then penetrate, kick, find open shots and score in all three levels. On defense, we need to be a bunch of gnats and be disruptive.”  — Troy Powell