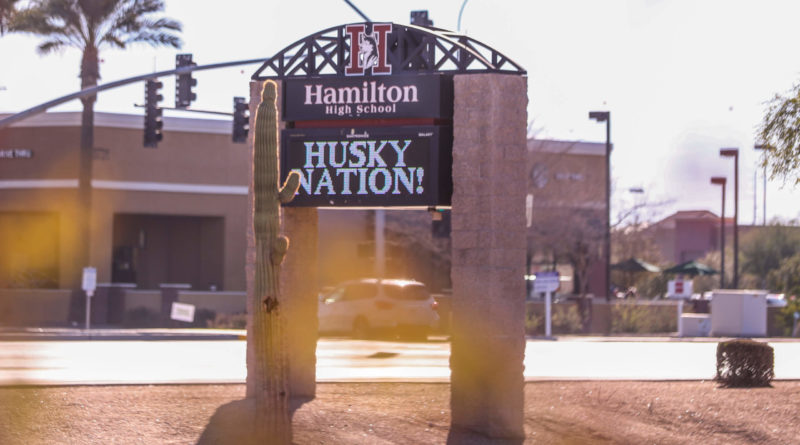 Over the next few weeks, SBLive Arizona will break down every 6A boys and girls basketball team in the state entering the 2020-21 season. Here’s our look at the Hamilton Huskies boys of the 6A Premier.

Harris called Galindo, a point guard who has played all four seasons on the varsity, the backbone of the team and someone who will carry the Huskies this season. Galindo, who averaged 10 points and six assists per game last season, also is a standout defender on the soccer pitch, having been named to the ODP West Region pool in October 2019. “There is not too much Adrian hasn’t seen,” Harris said. “He’s our closer, someone you can rely on at both ends of the court at the end of a game to make the right decision.”

Foote represents the vanguard of a junior class that lost only one game as sophomores last winter and will begin filling roles on the varsity this season. Foote (eight points, four rebounds per game last season) likely will start on the wing for the Huskies. “Aaron has tremendous upside, maybe the most of that junior class,” Harris said. “He has a chance to play at the next level. He’s extremely athletic and the best shooter in our program. We just need him to come out of his shell. He hasn’t had that ‘a-ha’ moment yet.”

Hinkle is a three-year varsity player who brings veteran leadership and defensive prowess to the lineup. He averaged eight points and five rebounds per game last season. “He’s a seasoned kid, a solid senior who’s a hard worker and big-time defender,” Harris said. “He’s a good role player who finishes pretty well at the basket.”

Erikstrup was a first-team all-Metro League selection in Beaverton, Ore., for a Beavers team that lost in the first round of the 6A state playoffs. He initially transferred to AZ Compass Prep before leaving for Hamilton, where the younger brother of Arizona State freshman Sydney Erikstrup (and her twin sister, Laura, playing for San Diego) adds a dimension the Huskies lacked. “Dane can be a game-changer with his height and skill set,” Harris said. “He brings something to the table that could propel us to the next level. He’s pretty smart and has a good basketball IQ, but his competitive spirit is what I really enjoy. I’m expecting big things from him, and I’m excited to help him take his game to the next level.”

Hardy transferred from Kentwood, Wash., where he played for a Conquerors team that won a share of the North Puget Sound Cascade Division title and qualified for the regional round of the 4A state playoffs. “He’s another great addition to our team,” Harris said. “He’s a good defender and can finish around the basket. He’s a good competitor who makes his teammates better.”

The Huskies last season narrowly missed a second consecutive trip to the 6A semifinals, losing at home to their Arizona Avenue rivals as the No. 2 seed. They graduated four all-region players from that team, but there’s reason for optimism that this could be the year Hamilton reaches the state final for the first time.

Just like the football team had a strong group of returning players supplemented by several key transfers that led to the Huskies being 13 seconds shy of winning an Open Division state title, the basketball program adds two important pieces in Erikstrup and Hardy and JV callups such as Foote and guard Jalen Lee to a roster that brings back players such as Galindo and Hinkle ready to step into bigger roles.

“It’s a great mixture of veterans and first-year guys,” said Harris, who became the first person to win Arizona state titles as a player and coach when he won the 2008 championship at Desert Vista.

“This is one of my best teams we’ve had since I’ve been here. Chemistry is so important, and this group has great chemistry. Dane came on board, and it seems like he’s been here a couple years. In combo with Dane, Blaize, how they’ve fit in our group, there’s a willingness to buy-in to the team concepts, and that chemistry will lead to them accepting their roles.” — Doug Harris