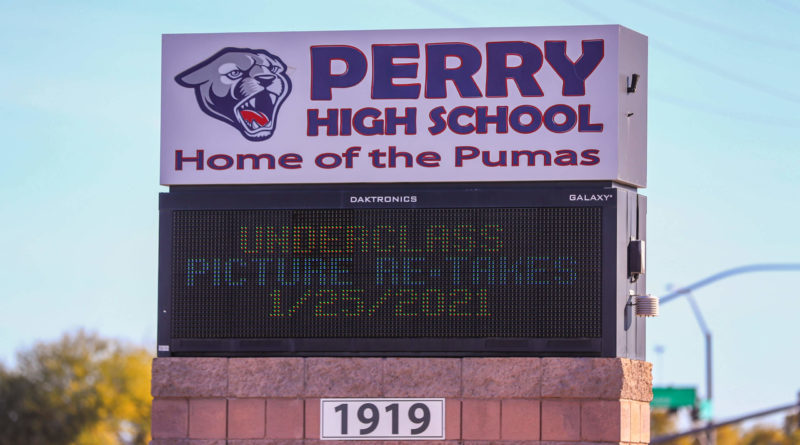 Over the next few weeks, SBLive Arizona will break down every 6A boys and girls basketball team in the state entering the 2020-21 season. Here’s our look at the Perry Pumas girls of the 6A Premier.

Playoffs: Beat Boulder Creek 61-27 in 6A first round; beat Sandra Day O’Connor 70-55 in quarterfinals; lost 48-47 to Valley Vista in semifinals

Schwartz is a four-year varsity player who received honorable mention all-region in a complementary role for the Pumas last season, averaging 4.3 points and 3.9 rebounds per game. She played strictly in the post as a junior, but Curtis sees her expanding her game this winter. “We’ll be relying on her a lot,” he said. “She has a lot of experience playing against a lot of good competition over her career. She can stretch it out and shoot from the outside. She’s also a tremendous leader and person.”

Smith is another four-year varsity player who will be counted upon to take on a larger role after averaging 5.2 points and 2.3 rebounds per game while shooting 32.9 percent from three-point range last season and receiving all-region honorable mention. “She’s one of the best shooters in the state who worked to improve her defense and handling the ball over the summer,” Curtis said. “She used to be just a standstill shooter. Now, we’re looking for a big senior year from her.”

Pierre might be one of the most versatile athletes in the state. She plays club soccer for AZ Arsenal and runs track, and when she joined the Pumas last fall, she was still very raw as a basketball player. The staff took their time working her into the lineup, but by season’s end, she’d played in 16 games, averaging 2.4 points and 1.3 rebounds. “She’s just at a different level as an athlete,” Curtis said. “She’s super gifted and has got a chance to have a really good year for us.”

McKinley epitomizes many of the players who will take the court for Perry this season. She shined on the JV despite being talented enough to start for many programs, getting into only five varsity games. “She was someone who was buried on the depth chart, but she’s a strong defender and really athletic,” Curtis said. “Since last year, she’s really improved her game. She can get up into people and track them every inch of the court.”

The upside to all the roster churn is that players such as McKinley and sophomore point guard Jayla Cal now will get an opportunity to show their stuff that they might otherwise not have received. Curtis knows many outsiders believe Perry will take a step back with all the lost talent, but he thinks otherwise.

“We always preach, ‘Your time will come,’” he said. “These girls could have transferred when they were buried on the depth chart, but they didn’t. That’s a testament to them, for sure. They kept getting better, competing in practice, and now their time is coming. Maybe a year earlier than we thought, but they’re ready.”

The Pumas might not have the offensive firepower of a year ago, when they were No. 2 in the conference in scoring at 62 points per game. They’ll rely more on their defense, not taking as many chances but taking more of a team approach that makes things difficult for opponents in the halfcourt.

“We’re not as naturally talented as we were last year, but as a whole, we’re really solid and play well together. We’ll have a little different way to win this year. Our defense is what’s going to carry us. We’ll need to be a little more consistent on defense if we want to win like we’ve come to expect.” — Mike Curtis