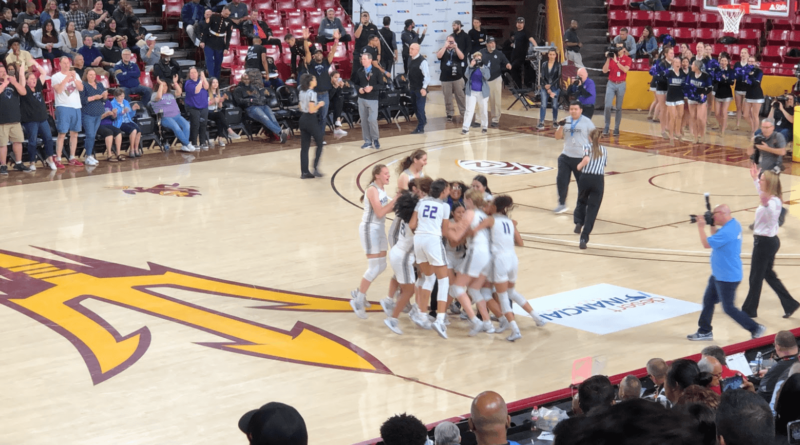 Over the next few weeks, SBLive Arizona will break down every 6A boys and girls basketball team in the state entering the 2020-21 season. Here’s our look at the Valley Vista Monsoon girls of the 6A Southwest.

The 2019-20 6A player of the year returns for her senior season looking to show her continued growth. The University of Washington commit is an explosive player who is a strong defender and an even better shooter.

Another top recruit, Isai had a phenomenal sophomore season for the Monsoon. She did a little of everything last season, serving as a perfect complement to Davis on the court. “She doesn’t work for quantity, she works for quality,” Matakas said.

Delgado is a strong outside shooter who made 40 percent of her three-point attempts last season. She’s a hustler and a leader on the court.

As a freshman, Arvallo played a pivotal role in the Monsoon’s success. Even though she’s smaller, she does a phenomenal job against bigger players and is quick moving the ball down the court. Now a sophomore, this could be a true breakthrough season for Arvallo.

The Monsoon went 18-0 last season, graduated only one senior and return the 6A player of the year. Naturally, expectations remain sky-high at Valley Vista.

Matakas said that despite the pandemic, most of her players played club ball together in the offseason and continued to improve. They’ll need to work a little harder to make sure they’re up to the conditioning level the coach expects from them, but that is something that will come with time.

As usual, the Monsoon will play lockdown defense as they seek a fourth state championship in the past five years. One new challenger they’ll face in the Southwest is Sunnyslope, which is making the jump from 5A. Matakas is excited to face the Vikings as she feels they’ll add a boost to the competition in the region, but she’s sad about the loss of the Tolleson Union District teams (Copper Canyon, Tolleson Union, Westview) that won’t be playing this winter.

“I just think I have kids who have been brought up in houses that have never been entitled and understand what hard work looks like.” — Rachel Matakas