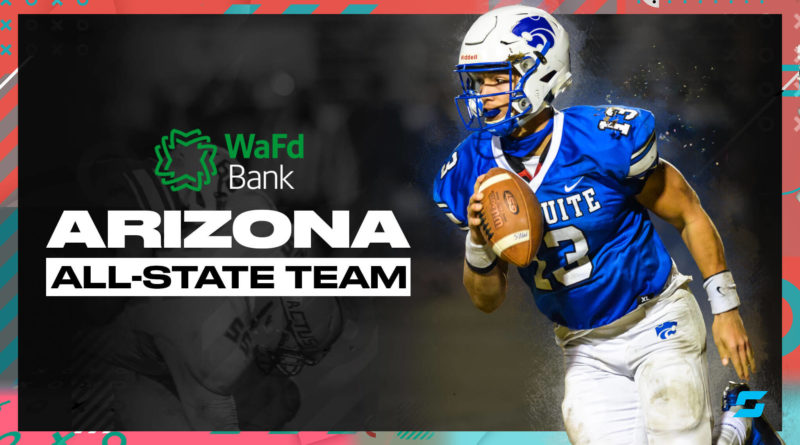 The WaFd Bank Arizona all-state teams are chosen by SBLive’s writers and contributors. Here are the first team, second team and third team honorees for the 2020 football season.

The University of Oregon signee led the Wildcats to a second consecutive 4A championship, leading a comeback from a 38-24 deficit against Cactus in the final to throw the game-winning touchdown pass and two-point conversion for a 39-38 victory. He finished the season with 3,431 passing yards and 34 touchdowns and rushed for 410 yards and eight scores. (Photo by Donna Mundy)

The 6A rushing champion went over 100 yards seven times — including a 327-yard game in Week 3 against Sandra Day O’Connor — and finished the season with 1,604 yards and 22 touchdowns to help lead the Hawks to their first appearance in a conference final. (Photo by Donna Mundy)

McIntosh was part of the Scorpions’ offensive triumvirate that led them to a berth in the Open Division tournament. He was the top 5A rusher during the regular season and finished the year with 1,187 yards and 11 touchdowns. (Photo by Paul Mason)

Sanders, who recently reopened his recruitment after decommitting from Boise State, saved his best for when it mattered most — in the Wolves’ final four games, he rushed for 635 yards and 10 touchdowns against Desert Edge, Liberty and Hamilton (twice). He finished the season third among 6A rushers with 1,240 yards and 21 touchdowns. (Photo by Paul Mason)

Lira made the most of his chance to play after transferring from Central because of the Phoenix district’s COVID-19 measures, forming an instant connection with Thompson and catching the game-winning touchdown and two-point conversion in the 4A championship game. He finished the season with 54 catches for 1,124 yards and 16 touchdowns. (Photo by Donna Mundy)

The UCLA signee led 6A with 77 catches for 857 yards and seven touchdowns and amassed 1,239 all-purpose yards to help the Colts qualify for the 6A playoffs in their first year in the conference. (Photo by Donna Mundy)

The Montana State signee led 5A in all three receiving categories — receptions (53), yards (891) and touchdowns (10) — to help the Scorpions run the table during the regular season and earn an Open Division tournament berth. (Photo by Paul Mason)

Robinson confirmed his status as one of the state’s top prospects in the Class of 2023 with an outstanding sophomore season, catching 27 passes for 347 yards and two touchdowns for the Pioneers. (Photo by Paul Mason)

Cisneros heads to Penn in the Ivy League after leading the Jaguars to a No. 1 playoff seed and their first 6A semifinal appearance, accumulating 2,852 all-purpose yards and scoring 34 touchdowns. He rushed for 1,552 yards and 21 touchdowns and caught 41 passes for 666 yards and 10 scores. (Photo by Donna Mundy)

A big-bodied offensive guard (6-5, 290 pounds) who has committed to Michigan State, Broscious helped pave the way for the Scorpions to average a 5A-best 425.9 yards this season. (Photo by Paul Mason)

The Northern Arizona signee was the leader of one of 6A’s top offensive lines — a unit that powered the Coyotes to the Open Division playoffs. (Photo by Picture Lady Photography)

Neher, a Drake signee and a three-year starter, played through a partially torn knee ligament to anchor the Wolves offensive line during the program’s fifth consecutive state championship run. (Photo by Paul Mason)

The transfer from Regis Jesuit in Aurora, Colo., became a stalwart on the Huskies offensive line (he had 41 pancake blocks in 10 games) and added to his growing list of Power 5 offers that now includes Arizona State, Michigan State, Utah, Air Force, Indiana, Kansas and Arizona. (Photo by Bryan Hardy)

It’s not often that an offensive lineman wins player of the year honors, but that’s how dominant the University of Oregon signee was for the Sabercats — Walden was named the 5A San Tan player of the year. (Photo by Bodie DeSilva)

The University of Oregon signee menaced opposing backfields all season, finishing with 16 tackles for loss, 12 sacks, 22 hurries and 53 tackles (40 solo) as the Wolves won their fifth consecutive state title. (Photo by Paul Mason)

The state’s consensus No. 1 junior prospect came alive in the postseason to spearhead the Firebirds’ run to the 6A title, their first state championship since 2011. He finished the season with 46 tackles (15½ for loss) and seven sacks. (Photo by Arianna Grainey)

There’s a reason UCLA kept up its pursuit even after Somerville announced his commitment to Michigan — the Bruins finally got him to switch on Signing Day. He had 12 tackles for loss in five games and finished with 22 tackles and 3½ sacks. (Photo by Heather Hackett)

Craddock played a major part in the Eagles’ turnaround from four consecutive losing seasons to reaching the 6A semifinals, leading the conference with 21 tackles for loss and finishing with 141 total (second in 6A). (Photo by Tracey Douglass)

Cullimore led the Hawks in tackles for the second consecutive season, finishing with 108 (seven for loss) to help the team reach the 6A final for the first time in program history. (Photo by Donna Mundy)

Pepper entered the season best known as one of the top long-snapping prospects in the country. After a season in which he finished among 6A leaders with 108 tackles (eight for loss), Michigan State swooped in and signed him away from his San Diego State commitment. (Photo by Arianna Grainey)

The Utah signee and prototypical middle linebacker plugged gaps and delivered punishing blows all season, finishing with a state-leading 157 tackles (67 solo) for a 6A quarterfinalist. (Photo by Picture Lady Photography)

Monday was the yin to Somerville’s yang as bookends of the Sabercats’ line, finishing with 18 tackles for loss in six games (most in 5A during the regular season) and 40 total to go with 4½ sacks and eight hurries. (Photo courtesy of the Saguaro Sabercat Football Foundation)

The three-year starter and Nevada signee locked down one side of the field for the Huskies. His numbers (30 tackles, five pass breakups) hardly tell the story of his impact on the field for the Open Division runner-up. (Photo by Heather Hackett)

The Minnesota signee was a lockdown defender for the Open Division quarterfinalist Scorpions, breaking up 12 passes and making two interceptions to go with 35 tackles (four for loss). (Photo by Paul Mason)

Howell is another Colorado transplant (Valor Christian in Highlands Ranch) who easily transitioned to his new home. The Colorado State signee led the Huskies with 98 tackles (52 solo) and four pass breakups. (Photo by Paul Mason)

The hard-hitting free safety had five games with 11 or more tackles and finished the season with 100 tackles (four for loss), four pass breakups and two forced fumbles to help the Lions reach the Open Division semifinals and come within an overtime two-point conversion of knocking off Chandler. (Photo by Elena Bernardo – EMB Photoshop)

Peterman finished 6 for 6 on field goals, including a career-best 41-yarder in the fourth quarter of the Open Division state final. He was 55 of 59 on PATs. (Photo by Shannon Liebrock)

Ray committed to Colorado State before the season and showed why the Rams can’t wait for him to arrive on campus, averaging 40.8 yards per punt, placing nearly half of his kicks inside the 20 and even launching an 86-yarder against Hamilton on Nov. 6. (Photo by Donna Mundy)

One of the top Class of 2023 cornerbacks in the country also was an electrifying weapon in the return game, averaging 22.2 yards on kickoffs and 17.5 yards on punts. (Photo by Bodie DeSilva)

Pepper not only emerged as one of the state’s top linebackers, he also maintained his place as Arizona’s leading long snapper — could he play both positions next fall in East Lansing? (Photo by Will Edmonds)

The Firebirds were the last 6A team to kick off during the AIA season after starting in COVID-19 quarantine, and it took them time to shake off the rust, going 2-2 in their first four games. Facing a must-win against Pinnacle just to make the playoffs, the Firebirds rolled to victory and never looked back, winning the program’s seventh state title and first since earning three in a row from 2009-11. (Photo by Arianna Grainey)

OVERALL PLAYERS OF THE YEAR

6A PLAYERS OF THE YEAR

5A PLAYERS OF THE YEAR

4A PLAYERS OF THE YEAR

3A PLAYERS OF THE YEAR

2A PLAYERS OF THE YEAR

1A PLAYERS OF THE YEAR

Looking back at our preseason previews & predictions