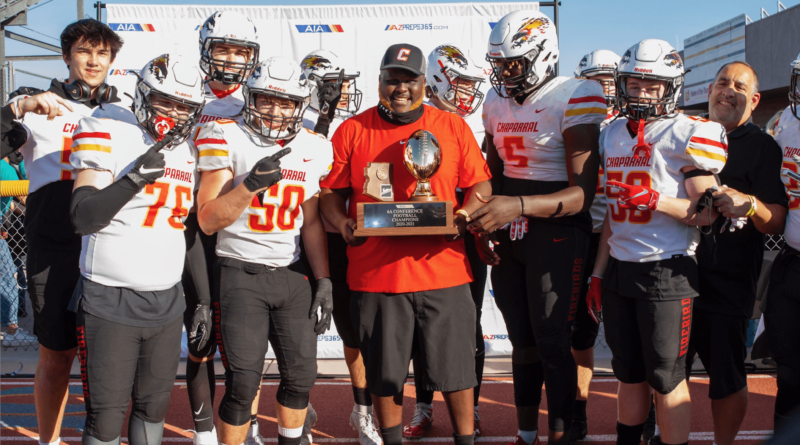 The Firebirds’ football dominance in Arizona spans decades, from region titles to state championships, and the athletes at Chaparral know it’s an honor to have the chance to continue the legacy of greatness.

“They say defense wins championships, and I know we may not be known for defense, and offensive line play and run game, but we were today and were throughout the playoffs,” Firebirds coach Brent Barnes said as he walked off the field after his team’s 24-14 win over Highland in the 6A state championship game.

A notorious offensive powerhouse, it was never a surprise to see explosive plays and high-scoring battles involving Chaparral. Lockdown defense, however, was not something the team was known for — at least before the arrival of Derrick Nsubuga.

The former Arizona State Sun Devil and Lindenwood Lion had a successful college career. Before joining the Chaparral staff for the 2017 season, Nsubuga was a defensive line assistant at Lindenwood University. He was such an immediate asset to the Firebirds program that he was promoted to defensive coordinator before the 2019 season.

Transforming a football team is a process that takes time, but the foundation had been set before Nsubuga — or Coach Zoo, as the players call him — arrived on campus. As soon as he showed up, he began planting his seeds of knowledge at every practice and the players continued to thrive.

“He did so much,” standout junior Anthony Lucas said. “My freshman year, I wasn’t good. I think I had six tackles the entire year playing freshman football and didn’t even start all the games.

“He’s a great teacher and coach. We rep the fundamentals over and over again every day in practice and he doesn’t let me slack off at all. Best D-line coach in the state.”

The defense made great strides the previous two years, but Nsubuga knew there was another level it could reach. The pivotal moment came early this season after a string of subpar performances.

“After giving up at least 35 points three games in a row, I had to take a look in the mirror,” Nsubuga said. “We had a defensive meeting and I said, ‘Guys, we aren’t very good on defense and it’s my fault. We aren’t tackling well and we aren’t fitting correctly in the run game.’”

How do the players remember it?

“We weren’t tackling well and weren’t being physical enough in the box,” Lucas confirmed. “We started being way more physical in practice and it helped.”

Entering the fifth and final game of the regular season, Chaparral’s playoff hopes rested with that night’s effort against Pinnacle. With a dominant performance, the Firebirds defeated the Pioneers 52-10 and narrowly slid into the 6A bracket as the seventh seed.

The entire mindset of the program shifted as it entered the postseason. Nsubuga let his defensive players know they needed to step it up, as they still had a lot to prove, and the level of competition was about to increase — and with it, they’d need to continue bringing the fire.

“We decided to be much more physical in practice, emphasized tackling and started bringing a lot more pressure on run downs,” Nsubuga said. “The kids responded to the challenge and went on an unbelievable four-game stretch.”

Chaparral held second-seeded Queen Creek to eight points in the quarterfinals and built a big lead on Sandra Day O’Connor before putting in backups and coasting to a 31-14 road win in the semifinals. But the biggest test to the revitalized defense was still to come as the Firebirds were to face an incredibly physical Highland team in the 6A final.

Chaparral gave up an early touchdown to the Hawks, but the defense held strong for the remainder of the first half and the Firebirds had a 14-7 lead at the break. The defense then came up with two huge plays in the second half to help ensure a victory.

First, it was a forced fumble and recovery when Highland was driving for a potential go-ahead score. Chaparral capitalized on the turnover when Jared Williams marched into the end zone for his second touchdown of the night and a 24-14 lead with five minutes remaining.

Trying to move the ball down the field quickly on their next drive, Hawks quarterback Gage Dayley was looking for receiver Logan Kingsford, who tipped the pass into the air. Ready for his moment to shine, Firebirds senior defensive back Jack Whitten saw the play unfolding and was able to grab the ball and secure it along the sideline to seal the win and the 6A title.

Nsubuga’s countless hours of preparing had paid off. The physical, aggressive defense he emphasized had proven to be effective, and it’s how the team will prepare for games next season. Nsubuga is excited, as what he figures will go down as one of the most talented classes he’ll ever get to coach will be just reaching its prime.

One player who made a major impact this year was Lucas, a four-star recruit in the Class of 2022 who can play anywhere on the field and thrive. Lucas has racked up 20 offers from programs such as Arizona State, Notre Dame, Oklahoma, Oregon and USC.

“I haven’t accomplished anything yet,” Lucas said. “My goal is to get better every day and dominate my lane.”

“He is the best defensive lineman in the country,” Nsubuga said. “He can play every technique on the line 0-9 and can even play stand-up linebacker.”

Lucas also registered seven sacks in eight games and forced a fumble. If it had been a non-COVID season, Nsubuga believes Lucas probably would have had at least 15 sacks and somewhere near 70 tackles.

“I’m proud that after he got all his offers, he was still hungry to get better every day. He’s a great leader and teammate,” Nsubuga said.

Several other defensive players also had stellar seasons for the Firebirds, however, and Nsubuga wants to make sure credit is given where it’s due.

“Meyer Shinsky and Joey Balducci are amazing defensive lineman. (Defensive backs) Davondre Bucannon and Cole Nordman did a great job and were a major reason Highland only passed for 120 yards, and our safeties, Cooper Jacobs and Jack Whitten, did a great job making open-field tackles,” Nsubuga said.

“Anthony is the superstar and gets the most credit and he should. But we have a lot of good players.”