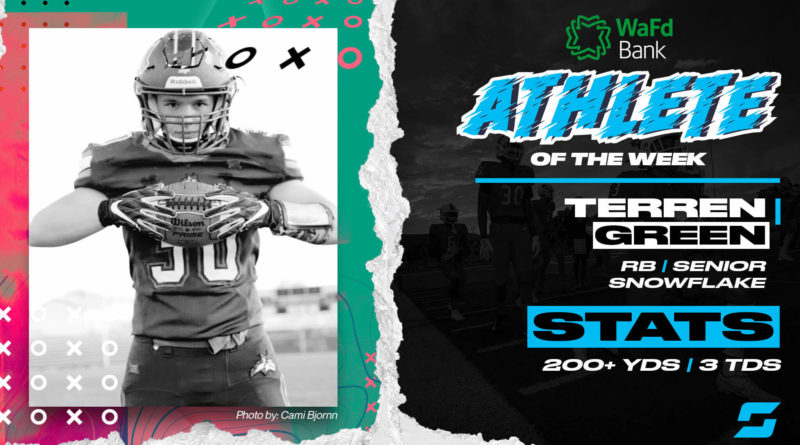 Congratulations to Snowflake running back Terren Green for being voted SBLive’s WaFd Bank Arizona High School Athlete of the Week!

Green rushed for three touchdowns and more than 200 yards in a 38-14 victory against Yuma Catholic in the 3A final.

Green received 48.51% of the vote, beating out Santa Cruz Valley RB who finished with 48.41%. Chaparral DL Anthony Lucas finished third with  2.38% and Mesquite WR Eric Lira was fourth with 0.14%. There were more than 39,000 votes tallied this week!

We are currently accepting WaFd Bank Athlete of the Week nominations for the week of Dec. 14-20. If you would like to nominate an athlete, please email regan@scorebooklive.com or tag us on Twitter or Instagram at @sbliveaz.

And here are the other athletes who were nominated for Dec. 7-13:

Eric Lira, Mesquite WR: Lira was dominant in the Wildcats’ 4A final victory, racking up 258 yards receiving and three touchdowns.

Hunter Ogle, Santa Cruz Valley RB: Ogle ran for 259 yards and three touchdowns in a 42-7 win over Benson in the 2A title game.

Eli Sanders, Chandler RB: Sanders ran for more than 100 yards and two touchdowns in a 23-21 Open Division championship-clinching victory against Hamilton, including an 80-yarder on Chandler’s first snap of the game.

Anthony Lucas, Chaparral DL: Lucas and Chaparral’s front seven led the way in a defensive duel against Highland that resulted in a 24-14 6A final victory. Lucas, a 4-star recruit, had two sacks.

Kyler Orr, Chandler LB: Orr came up with a huge interception in the fourth quarter of Chandler’s 23-21 Open Division win over Hamilton. He returned the pick to the one-yard line, and Chandler scored on the next play.