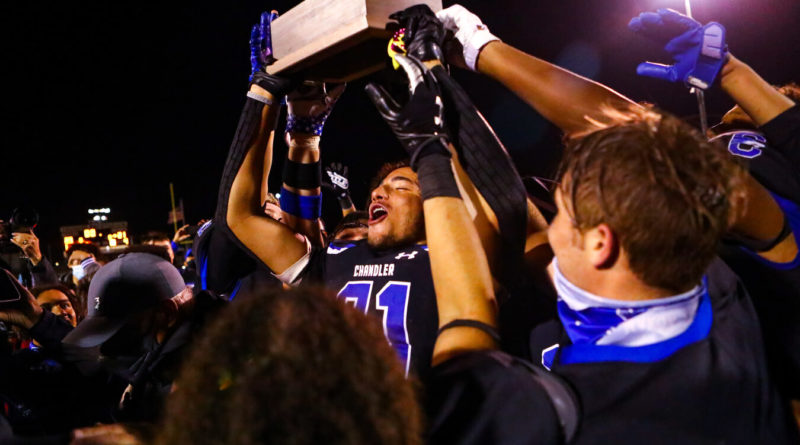 The Wolves might have had some good fortune in the Open Division title game against Hamilton, but in the end, the 2020 Chandler High School football team will be remembered for winning a fifth consecutive state title.

Hamilton and Chandler were neck-and-neck all season. The Huskies missed a chip-shot field goal that likely would have won them the Open Division title, so they finish the year No. 2.

Liberty lost in overtime to Chandler in the Open Division semifinals, 35-34. The Lions went for two to win the game and came up short. That earned Liberty the No. 3 ranking.

Saguaro’s postseason ended before it started with a first-round forfeit because of COVID-19.

Centennial fell to Liberty 25-24 in the first round of the Open Division playoffs after beating the Lions in the regular-season finale.

After having to miss the start of the season because of COVID-19, Chaparral bounced back to win the 6A championship with a 24-14 victory over Highland.

Corona del Sol put together a perfect 8-0 regular season. In the first round of the Open Division playoffs, the Aztecs fell to Hamilton, 50-0.

Desert Edge also went undefeated during the regular season but lost to Chandler 52-0 in the first round of the Open Division playoffs.

Salpointe Catholic advanced in the Open Division playoffs because of Saguaro’s forfeit before falling to Hamilton 58-14 in the semifinals.

Queen Creek lost in the first round of the 6A playoffs to eventual champion Chaparral, 28-6. The Bulldogs beat Highland in the regular season.

The Hawks advanced to the 6A championship game, where they fell to Chaparral, 24-14.

Casteel lost to Highland, 30-20, in the first round of the 6A playoffs.

Boulder Creek lost in the 6A semifinals to Highland, 35-28. The Jaguars’ other loss came to Casteel.

Sunrise Mountain won the 5A championship with a 42-20 victory over Ironwood.

Williams Field is the only non-playoff team to make our final rankings. The Blackhawks recorded wins over Casteel and Campo Verde this season.

Thanks to a legendary performance by Oregon-bound quarterback Ty Thompson, Mesquite won the 4A championship with a 39-38 victory over Cactus.

Cactus nearly took down Mesquite to win Arizona’s 4A crown. The Cobras’ other two losses were against Sunrise Mountain and Desert Edge.

American Leadership Academy-Queen Creek lost two games all season and both were to Mesquite. The first was a 60-42 regular-season defeat and the second came in the 4A semifinals, 19-16.

Ironwood lost in the 5A state title game against Sunrise Mountain, 42-20.

Sandra Day O’Connor was one of the surprise teams of the Arizona high school football season. The Eagles advanced to the 6A semifinals, where they fell to eventual champion Chaparral, 31-14.