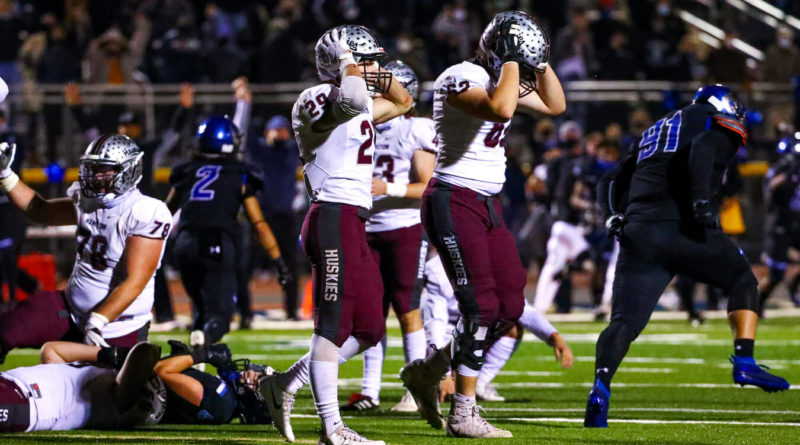 AHWATUKEE, Ariz. — Hamilton lost the AIA Open Division state championship to crosstown rival Chandler 23-21 on Saturday at Desert Vista High School after a potential game-winning field goal missed with 13 seconds remaining, but Huskies coach Mike Zdebski has no regrets about the game or the season.

“(I’m) extremely proud of the entire team,” Zdebski said. “Every kid, every coach. They busted their tail and (did) everything they could to win.”

Obviously, it was a difficult conversation to have, but Zdebski and his staff had a simple message for their heartbroken players.

“We love them,” Zdebski said. “They played their hearts out.”

When a team loses its final game, the attention naturally turns to the seniors. While Zdebski is sad he won’t have the Class of 2021 in a Huskies uniform anymore, he knows they’ll always be around.

“With our senior class, they’re never gone,” Zdebski said. “They don’t get to play football for Hamilton again, but they’re a part of our brotherhood and our family and they’ll be here forever.”

The program has sent numerous players to play in college and even the NFL, including likely Pro Football Hall of Fame linebacker Terrell Suggs. What’s next for this senior class?

“There’s a number of them that are going to go on and play college football and do a great job,” Zdebski said. “The most important thing is that they go on and further their education.”

Even as he says goodbye to a solid senior class, Zdebski is extremely optimistic about the Huskies’ future.

“There’s a lot of positives,” he said. “We’ve got a lot of kids coming back. We’ll get back and work through this COVID-19 (situation) and see where it goes.”

Three years ago, Zdebski made the move from Walled Lake Western High School in Walled Lake, Mich., taking over a program that had fallen from glory.

In 2017, Hamilton’s hazing scandal went public and eventually led to the resignation of Steve Belles, who went 131-18 in 12 seasons as the head coach. Belles led the Huskies to a 53-game win streak, a state record at the time, and the team was ranked No. 4 nationally.

Zdebski relieved interim head coach Dick Baniszewski in 2018. What made him decide to leave the Great Lakes for the desert?

“Everything,” he said. “It’s the biggest school in Arizona, it has great academics, it was a no-brainer. It’s not (an opportunity) that you want to turn your back on.”

“I wouldn’t do this with another band of brothers — they mean everything to me,” Trojan said. “Shout-out to all the seniors, I wouldn’t want to do anything without them.

“For all of our youngins, they have to stay together, because this is a brotherhood. There’s more to life than football. There (are) failures in life, but that’s a setup for great successes.”

Trojan, a three-star recruit according to 247Sports, has not made a decision as to where he’ll play college football — he has an offer from the University of New Mexico — but he knows what he’s learned at Hamilton that he’ll take with him to the next level.

“The biggest thing is that not everything is going to be handed to you,” Trojan said. “(I also learned) to stick together and just play mentally. Everything’s mental. There’s a physical part in football, but it’s also mental. You just (have) to stick together no matter what.”