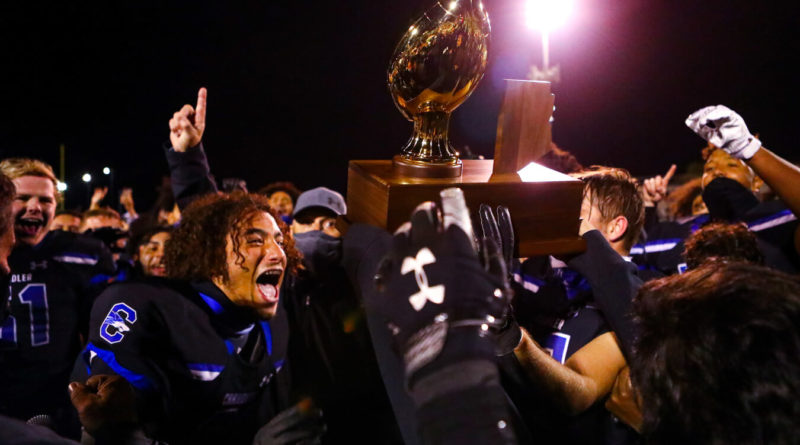 PHOENIX — The Chandler High School community has been struck with a number of tragedies this year. The most personal one to hit the football team was the loss of senior Tony Brewer’s mother.

“This is probably one of the hardest years of my life, man, losing my mom in May,” Brewer said as tears flowed from his eyes.

“And all my teammates rallied around me and said they were going to win it for my mom. I owe everything to them, man. That’s my family and I’m going to miss them for sure.”

The Wolves delivered for Brewer’s mother as they fought their way to a fifth consecutive state championship with a 23-21 win over Hamilton on Saturday night in the Open Division final at Desert Vista High School.

Chandler secured the victory when the Huskies missed a 27-yard field goal attempt with 13 seconds left, capping a hard-fought battle between the consensus top two teams in the state.

Senior running back Eli Sanders ran for an 80-yard touchdown on the first snap of the game, giving the Wolves a quick 6-0 lead.

Hamilton’s offense struggled out of the gate, with a fumble on its first drive and a missed field goal later in the first quarter, and Chandler led 13-0 after senior quarterback Mikey Keene hit senior tight end Eli Swope for a seven-yard score early in the second.

“I just want to thank my teammates and my O-line. They’ve done a wonderful job,” Sanders said.

Added Swope: “They do their job every single play and they dominate up front, and that allows us to get those big runs and all those pass plays in.”

The Huskies were forced to punt on their next drive but caught a break when Chandler fumbled. Hamilton recovered at the Wolves 40-yard line, and a short time later, junior Nicco Marchiol found classmate Christian Anaya for a 20-yard touchdown to get the Huskies on the scoreboard.

Hamilton had a chance to tie or take the lead late in the second quarter, but an interception at the goal line with seconds remaining in the half left the score 13-7 at the break.

The third quarter was a back-and-forth defensive battle. It was Brewer who made perhaps the biggest play with an interception at the Chandler 15-yard line, and the Wolves capitalized by marching down for a field goal and a 16-7 advantage to open the fourth quarter.

On the next drive, Marchiol threw an interception directly to Chandler senior linebacker Kyler Orr, who ran it back to the 1-yard line. Sanders’ second touchdown and the ensuing extra point made it 23-7 with 10:45 to play.

The Huskies weren’t done, scoring on Marchiol’s keeper and converting for two to trim the deficit to 23-15 with 7:33 left. The defense then forced a punt, and Hamilton scored again with 4:07 remaining when senior Caden Messner punched it in from six yards — but the two-point try to tie the score failed.

The Huskies got the ball for one final drive, which ended with the wide-left field goal attempt as the Wolves stormed the field to celebrate. It was their second win over Hamilton this season, this one on the biggest stage.

“Hamilton is a good team,” Brewer said. “We came in here and knew it was going to be a dogfight … we just had to keep our heads down and keep going, and when adversity struck, it was just about who we are.”

Chandler coach Rick Garretson praised his team’s defense for how well it stood up against some of the state’s top players, including Marchiol and senior running back Rodney Clemente, who transferred from Chandler to Hamilton during the offseason.

“The defense played great, lights-out,” he said. “They have our back and we have theirs. We can always count on the defense and tonight they came through.”

There were numerous flags in the game between the rivals. The Huskies were called for 15 penalties for 89 yards; the Wolves, 13 for 87.

“There’s nothing you can do about calls officials make,” Hamilton coach Mike Zdebski said. “The players made the mistakes that had a huge impact on the game. We lost a punt return for a touchdown and a two-point conversion.”

In a tense game at the end of a difficult season, Chandler was able to dig deep and get the job done.

“I’m so proud of my kids, my coaches, my parents, my faculty, my administration — it’s all a big team effort,” Garretson said.