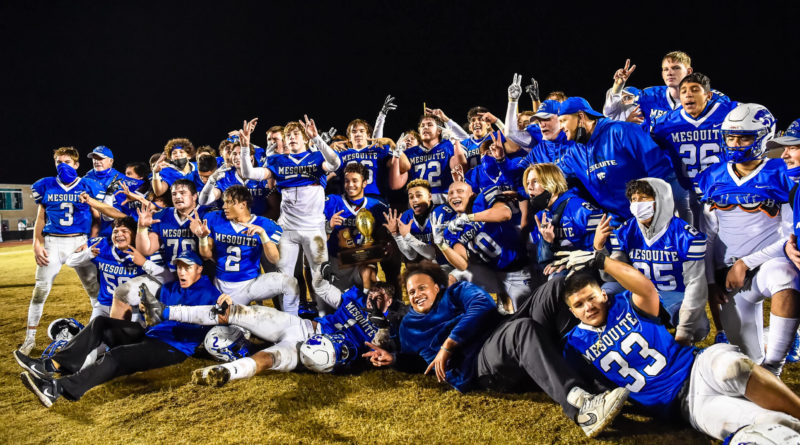 GILBERT, Ariz. — For Mesquite wide receiver Eric Lira, the chance to see the football field at all this year was a coveted one.

After transferring from Central High School, which missed most of the season because of district-wide COVID-19 measures, the senior had the opportunity of a lifetime Friday when he stepped on the field to play for a 4A state championship against Cactus.

Forced to sit out the first half of the season because of transfer rules, Lira knew he had a limited time to make his move worth it. Upon entering the lineup, he brought an immediate boost to the team with the way he was able to connect with senior quarterback and University of Oregon commit Ty Thompson. In his six games on the field this season, Lira was a huge difference-maker for the Wildcats.

“I’m glad I made the move. It worked out for me,” Lira said. “I’m gonna get a ring, and this team is unbelievable.”

His appreciation for everything was summarized best during an emotional FaceTime call on the Highland High School field after Mesquite’s thrilling 39-38 title-clinching victory, when Lira thanked his former coach for allowing him the opportunity to transfer so that he could play this season.

The chemistry between Lira and Thompson was apparent from the beginning of Friday’s game. The two connected for a 57-yard touchdown for Mesquite’s first points midway through the first quarter.

“He makes great plays, as you saw, and we’re blessed to have him,” Thompson said.

Added Wildcats coach Scott Hare: “Eric was the guy we really needed to be the guy that was coming off the bench a little fresher with the offense, and we wanted to put him in positions to be able to make the plays that he was making.”

Mesquite’s defense contributed some points on Andrew Morris’ 50-yard fumble return with 3:43 left in the first quarter. The troubles continued for the Cobras on special teams as they fumbled again on the kickoff, setting up a 47-yard bomb from Thompson to Morris, followed by a one-yard touchdown run by Thompson to give Mesquite an 18-6 lead at the end of the first.

Cactus’ defense answered when junior Justin Holmes brought down Thompson in the end zone for a safety. After the Cobras got a touchdown by Damian Jiles and a two-point conversion, their defense made another big play on Thompson when junior Aki Pulu came away with an interception. That led to another touchdown and two-point conversion, and Cactus had a 24-18 lead with 5:33 left in the half.

“I forget the last play. I flush the last play no matter what happens, and I keep my head in the game to help my team,” Thompson said.

Thompson started attacking the ground more aggressively on the following drive, and he found Lira for a 35-yard touchdown to tie the score at 24-24.

Cactus answered with another touchdown run by Jiles, giving the Cobras a 32-24 halftime lead. They extended the lead to 38-24 early in the third quarter after forcing a fumble at the Mesquite 31-yard line and getting a short touchdown run by Pulu.

Thompson capitalized on good field position with a 15-yard touchdown run to make it 38-31 with 10:12 left.

With 17 seconds to play, Thompson connected with Lira on a two-yard touchdown pass to bring Mesquite within a point at 38-37. The Wildcats went for two, and Thompson found Lira — again — for the winning conversion.

“I just knew they were going to put me one-on-one, and I knew Ty was going to see that and he was going to throw it up, so I just had to create space and get open and catch the ball,” Lira said.

The championship is the second in a row for the Wildcats, who defeated Desert Edge 28-23 in last year’s final.

“I’m excited. I think it shows just a lot of hard work,” Hare said. “It’s really hard to get into this position. It’s definitely really difficult to get there twice.”

Thompson completed 26 of 40 passes for 340 yards and three touchdowns in his final high school game. Lira was responsible for more than 250 of those yards on 16 receptions and all three TDs.

“This is a great team,” Thompson said. “I’m excited to bring this to Oregon, bring this hype, and go out on a win like this.”

Cactus generated 216 rushing yards, including 126 by Jiles, who finished with three touchdowns. Will Galvin completed 6 of 8 passes for 102 yards.

Jiles and Galvin are sophomores. The Cobras will return most of their starters next season.

“That’s a great team, and Coach (Joseph) Ortiz is doing a great job,” Hare said. “That’s a big, physical team … a young team, too. They’re going to be back here next year.”