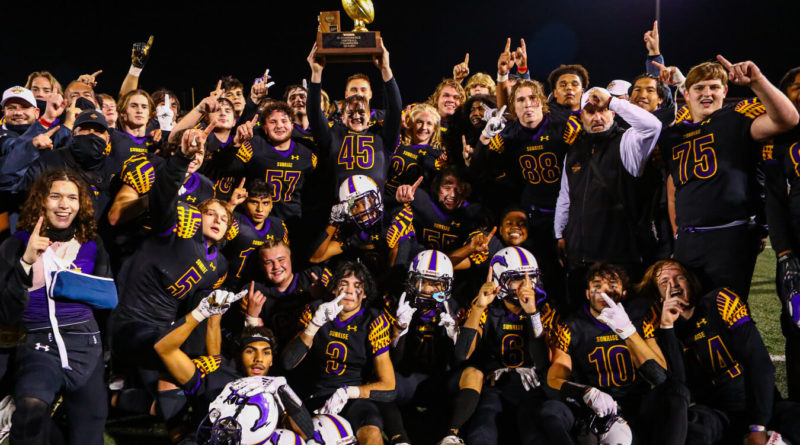 PHOENIX, Ariz. — The Sunrise Mountain Mustangs had their hands full Friday in the 5A football championship game against the Ironwood Eagles and three-star senior quarterback William Haskell, who is committed to San Diego State.

The Mustangs contained Haskell on defense and could not be stopped in the running game as they cruised to a 42-20 win at North Canyon High School.

Game planning against Haskell was difficult for Sunrise Mountain coach Steve Decker, but the final game plan was simple.

“Just containing him. You saw him in the first half (when he escapes the pocket),” Decker said. “We had to contain him, we had to get a little more pressure on him in the second half. We talked about that at halftime, and we did it.”

After leading by one point at the break, the Mustangs outscored the Eagles 27-6 over the final two quarters. It was a dramatic turnaround from their regular-season meeting, when Sunrise Mountain lost to Ironwood, 20-11, on Oct. 30.

“We blocked a lot better (and) we had a better game plan of picking up their blitzes,” Decker said. “They really hurt us with their defensive stunts last time, and we fixed some of that.”

Tommy Arnold rushed for 224 yards and three touchdowns. Julian Esber added 97 yards on the ground with a touchdown, and Brandon Bogard had 62 yards with a score.

Bogard gave all of the credit to his teammates up front.

“The offensive line was a huge part,” Bogard said. “I wouldn’t have been able to do anything without them. We owe everything to them (for doing) a great job — they won the game for us.”

The Mustangs stuck to the ground game and scored 35 consecutive points after trailing 14-7 early in the first half.

“A lot of things are going through my mind (as it’s happening),” Bogard said. “I’m thinking how great this team is working together, how well we’re doing, and how we’re going to get this win.

“It’s just super exciting for everyone, and after the third quarter, I knew we had the win in the bag.”

The most important of those 35 consecutive points for their confidence were the last seven, which put Sunrise Mountain ahead 42-14 with less than nine minutes remaining.

“(We were) super excited,” Decker said. “That one just topped it off, but these guys are dangerous, so that really just helped us be a little (calmer) to get down the stretch.”

Eagles coach Christopher Rizzo has no regrets about his team’s season.

Haskell finished 13 of 23 for 193 yards and a touchdown in his final high school game. He added 94 yards and two touchdowns running the ball.

“He left a nice mark on this place, he left a great mark on our program, and he left a standard of winning,” Rizzo said. “The whole senior class did. Elijah (Sanders) and Nehemiah Lindo, Manny Tinoco, Steinar Christianson — you can go down the list, but losing a guy like (Haskell) is tough, losing a highlight reel like (him) is very tough.”

Haskell hopes he and his fellow seniors left a mark on the program that will translate to future success for the Eagles.

“(I think) the underclassmen right now are going to take next year super serious and say, ‘We made it to state last year. We don’t need all the talent that we had this year, we can do it ourselves,’” Haskell said.

He, too, has no regrets.

“We did come (out) with a loss, but the guys went out there and performed at their best, and that’s all I could have asked for from the team,” Haskell said. “Just having the opportunity to come out here and play one of the biggest games, with my boys I’ve known for countless years … I’m just thankful for the opportunity to play this game.”