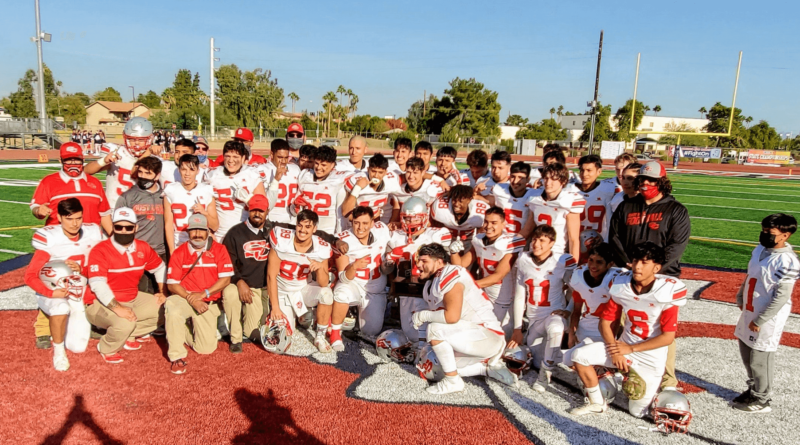 Ogle ran for 208 yards and three touchdowns to lead the Dust Devils to a 42-7 victory over Benson in the 2A final at Coronado High School.

Santa Cruz Valley last won a state title in 1980 and had reached the championship game once since before this season. The third-seeded Dust Devils (9-1) beat Scottsdale Prep and St. Johns to advance to the final.

The top-seeded Bobcats, making their third appearance in a state final, finished the season 9-1, unable to control a Santa Cruz Valley running game that averaged 7.7 yards per carry and finished with 323 yards and five touchdowns.

Ogle finished the COVID-19 shortened season as Arizona’s only 2,000-yard rusher, going over the mark in the second half Saturday. He ends the fall with 2,060 yards and 25 touchdowns on 195 carries.

Ogle’s first touchdown was the only score of the first half, a 7-yard run with 8:49 left in the first quarter.

The Dust Devils pushed the lead to 14-0 on their opening drive of the second half on a 21-yard touchdown run by Steve Calvin.

The Bobcats answered with their only score, an 8-yard touchdown run by Jace Barney.

From there, it was all Santa Cruz Valley.

Ogle needed one play to restore the two-touchdown advantage with a 49-yard run. Then, after Tanzor Gil recovered a fumble on a strip-sack, Ricardo Alazniz’s 7-yard touchdown run made the score 28-7.

Ogle tacked on a 62-yard touchdown run, and younger brother Wyatt Ogle finished the scoring with a 28-yard touchdown pass to Sias Lopez with 2:40 to play.

Breaking down each of this week’s final matchups

Our predictions: Who will win in each class?