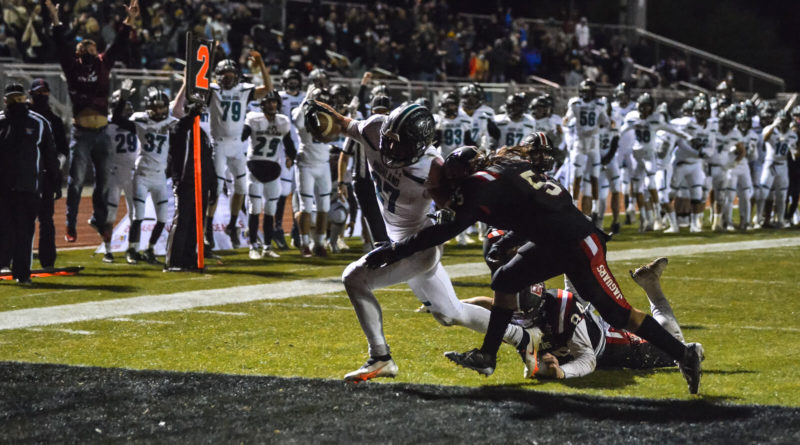 Here is an inside look at each of this week’s Arizona high school football state championship games. (Photo by Donna Mundy)

Last meeting: The Wolves won 34-14 in Week 8 of the regular season to clinch the Premier Region title. The Huskies lead the all-time series 18-9, but Chandler has won the previous eight meetings.

About the Huskies: Hamilton earned its spot in the program’s 13th championship game with a 58-14 rout of Salpointe Catholic in the semifinals. The Huskies have the most state titles of any team playing this weekend with seven, but they haven’t won it all since 2012 or played in a final since 2014. With standout junior QB Nicco Marchiol sitting out his second consecutive game with a bruised shoulder suffered in the Week 8 loss at Chandler, the Huskies again turned to their 1-2 backfield combo of Rodney Clemente (132 yards, two TDs) and Noah Schmidt (131 yards, two TDs) to lead the way. Sophomore Roch Cholowsky (9 of 13, 67 yards, one TD, one INT) was efficient in the victory, but if the Huskies are to avenge their loss and knock off the Wolves, they’ll need more out of the passing game. WR Christian Anaya leads the team with 42 catches for 376 yards and five TDs. The defense sacked Salpointe Catholic quarterback Treyson Bourguet seven times and had 17 hurries, holding the Lancers to 224 yards. Safety Jack Howell leads the team with 90 tackles, and junior DEs Grant DeGraffenreid (18½ tackles for loss, 4½ sacks, 33 hurries) and Russell Davis II (16 TFL, 12½ sacks, 18 hurries) spearhead the pass rush.

About the Wolves: The four-time defending state champions escaped with a 35-34 overtime victory over Liberty in the semifinals for their 35th consecutive win and 42nd in a row over state opponents. The No. 3 team in the SBLive Power 25 watched the Lions, who won the 6A title in 2019, erase a 28-7 halftime deficit to force overtime. Eli Sanders put Chandler up 35-28 in overtime with a 1-yard TD run (his fourth touchdown of the game), then the Wolves denied Liberty on a two-point conversion attempt after the Lions answered with a Brock Mast TD pass on their possession. Chandler has posted three shutouts this season and outscored opponents 419-91. Sanders (Boise State) ran for 201 yards on 28 carries against Liberty to give him 1,240 yards and 21 TDs. QB Mikey Keene (Central Florida) has completed more than 70 percent of his passes (154 of 218) for 2,069 yards and 22 touchdowns with just two interceptions. WR Jalen Richmond (37-634-7) matched his career high with seven catches last week for 120 yards. LB Hank Pepper (San Diego State) leads the team with 93 tackles. DE Brandon Buckner (14 TFL, 10 sacks, 20 hurries) powers the pass rush.

Photo by Will Edmonds

About the Firebirds: Chaparral needed a victory in Week 8 just to get into the field as a No. 7 seed, but during its current three-game win streak, the Firebirds have outscored opponents 109-32, including a 31-14 semifinal victory over Sandra Day O’Connor to reach the final for the first time since 2013. The Firebirds won despite standout RB Jared Williams (695 yards, 11 TDs) sitting out with hamstring tightness. He should be ready to go in Saturday’s final. Junior QB Brayten Silbor has caught fire the past couple of weeks, throwing for 335 yards and four touchdowns last week. Seniors Max Minor (46-841-9) and Capri Hamilton (43-416-4) have been the prime beneficiaries. DT Anthony Lucas, the state’s No. 1 junior recruit according to 247Sports, has 14½ tackles for loss and six sacks to lead a resurgent defensive effort.

About the Hawks: Highland has shrugged off any disappointment of not being selected for the Open tournament to reach its first championship game, ousting top-seeded Boulder Creek 35-28 in the semifinals. Senior Max Davis’ 9-yard TD run with 3:38 remaining broke a 28-28 tie, and the Hawks denied the Jaguars on fourth-and-goal on the final play to secure the victory. Davis has gone over 100 yards seven times this season (including 168 last week) and has 1,528 yards and 21 TDs. Junior QB Gage Dayley threw four touchdown passes for the second consecutive week and has 17 this season. Senior MLB Kam Cullimore had 17 tackles against Boulder Creek and leads the team with 108 tackles (seven for loss).

About the Eagles: Ironwood secured its shot at a first state championship with a dominant performance against Notre Dame Prep, romping to a 41-22 victory in which the Eagles led 34-0 midway through the third quarter. The Eagles have reached the final three times, losing in 1995, 1996 and 2002. Dual-threat QB William Haskell (San Diego State) threw for three first-half touchdowns and set up another score in the third quarter with a 52-yard bomb. He finished 16 of 22 for 266 yards and three touchdowns.

About the Mustangs: Sunrise Mountain reached its first final with a 28-3 win over Campo Verde, the Mustangs’ fourth consecutive victory. Senior RB Tommy Arnold, who battled through injuries during a two-game stretch with back-to-back losses to Ironwood and Desert Edge, had a second consecutive monster game with 195 yards and three touchdowns, putting him at 1,100 yards and 17 TDs for the season. Senior QB Travis Ward has thrown for 873 yards and 10 TDs, with senior Ezekiel Marshall (25-595-8) his top target. The Mustangs held Campo Verde to 20 yards on the ground and 114 yards of total offense. Senior LB Owen Thomas has a team-high 88 tackles (19 for loss) and 11 sacks.

About the Cobras: Cactus’ team motto all season has been “Unfinished Business,” referring to last year’s state semifinal loss to Mesquite in which the Cobras were stopped inches from the goal line on a potential winning two-point conversion with less than 40 seconds left. Buoyed by the addition of transfers Aki Pulu (Chaparral) and Chase Jasinski (Liberty) — the Cobras have gone 6-0 and outscored opponents 254-69 since they became eligible in Week 5 — Cactus advanced to its first final since 2011 with a 35-13 victory over top seed Casa Grande. Jasinski has combined with Will Galvan to throw for 1,120 yards and 15 touchdowns in their six games together. Galvan plays receiver when Jasinski is under center, catching 12 passes (two for touchdowns). Pulu has made 64 tackles in six games and rushed for 321 yards and seven TDs on 31 carries (10.4 average). Juniors Ata Teutupe (105 tackles, 10 for loss) and Justin Holmes (92 tackles, 16 for loss, six sacks) lead the defense.

About the Wildcats: Defending champion Mesquite has not lost to a 4A school this season, with a loss to 5A finalist Sunrise Mountain in Week 2 its only blemish. The Wildcats gutted out a 19-16 victory over last year’s 3A champion, American Leadership Academy-Queen Creek, in their semifinal. The Patriots grabbed a 16-13 lead after a safety and Ryan Meza’s return of the ensuing free kick 60 yards for a touchdown. Mesquite forced a punt with around four minutes remaining, and Oregon commit Ty Thompson led a go-ahead drive, hitting Gerardo Saenz for a touchdown with less than a minute left. ALA-Queen Creek had one last chance to tie it but missed a 31-yard field goal with three seconds to go. Thompson has thrown for 3,095 yards and 31 touchdowns this season. Standout senior WR Eric Lira returned after a one-game absence and caught a touchdown pass against ALA-Queen Creek. Junior WR/LB Andrew Morris also caught a touchdown pass and had an interception for the Wildcats.

Last meeting: Yuma Catholic won 44-16 in the first round of the 2017 3A state playoffs in the teams’ only previous meeting.

About the Lobos: Since suffering its only loss in Week 5 to Round Valley, Snowflake has won five in a row, escaping with a 28-27 overtime victory over ALA-Gilbert North in the semifinals when the Lobos stopped a two-point conversion try inches from the goal line. Snowflake has won five state titles, but the last came in 1993, and this is the Lobos’ first appearance in the final since 2014. Senior RB Terren Green went over 100 yards for the fourth consecutive game in the semifinals and has 767 yards and 13 touchdowns this season. Junior QB Caden Cantrell has thrown for 1,661 yards and 13 touchdowns. His top targets are senior Mayson McKinlay (24-403-5) and junior Noah Baum (23-552-6). Green also leads the team with 97 tackles, and senior DE Payson Cardon leads the conference with 17½ tackles for loss and 12 sacks.

About the Shamrocks: Yuma Catholic won three titles in a four-year period as a 2A school and is back in the 3A final for the second time in the past three years after a 36-20 semifinal victory over Pusch Ridge Christian Academy. The Shamrocks average 46.9 points per game, led by sophomore QB Richard Stallworth, who threw for five TDs in the semifinals and has passed for 3,778 yards and 49 touchdowns (10 interceptions) this fall. Five receivers have 20 or more catches, led by junior WR Austin Rush (50-983-16) and junior RB Devon Black (37-576-6). Black also leads the team with 455 rushing yards and six TDs. Junior LB Dezmend Esquivel leads an underrated defense with 101 tackles. The Shamrocks have 40 sacks and have caused 26 turnovers in allowing just 13.5 points per game.

About the Dust Devils: Santa Cruz Valley received two big plays from junior Steve Calvin and another big game from senior Hunter Ogle to get past St. Johns 27-20 and advance to the final for the first time since 2017. The program’s last title came in 1980. Calvin returned a punt 67 yards for a tying score late in the third quarter, then scored the winning touchdown on a 49-yard run with 8:53 to play. Ogle ran for 186 yards and two first-half touchdowns to take over the state lead with 1,852 yards this season (22 TDs). He also leads the team with 53 tackles (six for loss). His younger brother, Wyatt, has thrown for 530 yards and eight touchdowns at quarterback and shares the 2A conference lead with six interceptions at defensive back.

About the Bobcats: Benson is in the final for the first time since 2015 and the third time in school history after holding on for a 34-27 victory over Arizona Lutheran in the semifinals. The Bobcats have outscored opponents 276-63 thanks to a punishing running game — they have attempted 41 passes all season — and a defense that forced three turnovers last week, including a last-minute interception by Jimmy Lerblance that sealed the victory. Junior RB Devin Bowling leads the team with 876 yards and 12 touchdowns on 100 carries. Junior QB Brok Determan caught Arizona Lutheran off-balance with two touchdown passes last week, giving him six for the season out of his 16 completions. Junior LB Cameron McFarland leads the team with 49 tackles. Lerblance shares the conference lead with six interceptions.