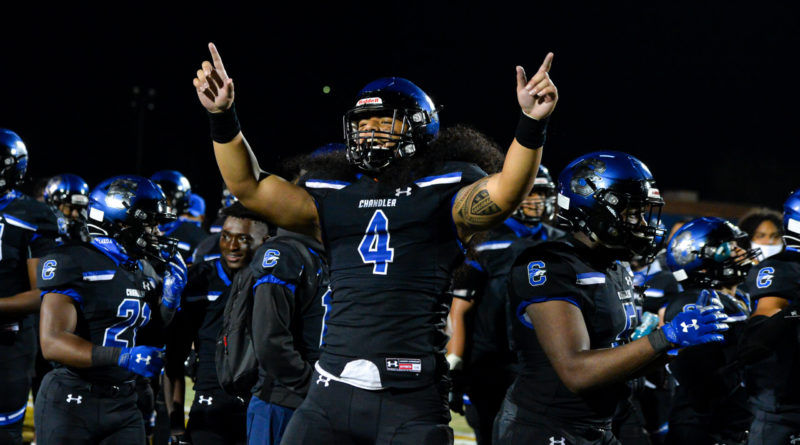 By Brandon Jones | Photo by Will Edmonds

CHANDLER — Arizona’s top team and the national No. 3 in the SBLive Power 25 found itself in an unfamiliar position Saturday — a down-to-the-wire overtime game.

Still, the result was no different than in every other Chandler game this season — a Wolves victory.

Chandler (9-0) outlasted Liberty for a 35-34 win in an Open Division state semifinal at Chandler High School, a surprisingly tight contest for a Wolves team accustomed to blowing opponents out of the stadium. Before Saturday, their closest game this season was a 34-14 win against crosstown rival Hamilton on Nov. 20 on ESPN.

Coincidentally, that is the team Chandler will face next.

“I didn’t have a doubt in my mind,” Wolves senior Brandon Buckner said. “I just kept faith. We didn’t get too riled up. We all stay calm because we’re going to pull through this at the end.”

It wasn’t easy against the pesky Lions — the same team Chandler defeated 44-10 in the season opener Oct. 2.

The Wolves never trailed and held a 28-7 lead at halftime, but Liberty chipped away throughout the second half. The Lions finally tied the score at 28-28 after Julian Gerth’s interception-return touchdown with 3:13 left, forcing Chandler to go to overtime to secure the victory.

Wolves coach Rick Garretson had a simple message for his team as the 21-point lead slipped away.

Chandler was on offense first in the extra period and got a one-yard touchdown run by senior Eli Sanders, followed by an all-important extra point to take a 35-28 lead. Liberty answered with a touchdown on fourth-and-goal to silence the Wolves fans, then elected to go for a two-point try to win the game, rather than kicking a PAT to force a second overtime period.

Once again, Garretson’s message to his team was quite simple.

Lions quarterback Brock Mast rolled to his right and fired into the end zone to an open receiver. The pass was off the mark, incomplete, and Chandler had escaped.

Buckner, an outside linebacker/defensive end and a University of Oregon commit, had multiple sacks and tackles to help keep the Liberty offense in check in regulation. He knew exactly what his defense needed to do on the last play.

“I’m just proud of our team and the defense and the way that we stepped up during that clutch time.”

Saturday’s game is a story Buckner plans to tell his future teammates at Oregon.

“I (have) to,” he said. “Just playing in a game like this … this is what it’s supposed to be like. Open Division is the best eight teams in Arizona, and we’re out here having fun and competing. This is what football is all about, games like this, moments like this.”

Sanders had confidence in Buckner and the defense to get the final stop.

“It’s all trust,” Sanders said. “It’s what we work for every day and we put hard work into our practice. Since it came down to that situation, we all trusted them, and they came out and stopped it.”

Added Garretson: “When the chips are on the line, we come through. We came through again tonight.”

The most interesting storyline might have been on the losing side, however.

In the state quarterfinals — with the help of a two-point conversion — the Lions pulled out a one-point victory at powerhouse Centennial. A week later, they were oh-so-close to doing the same against one of the best teams in the country.

“I’m just so proud of the kids. They play so hard,” Thomas said. “That’s one of the non-negotiables (for us). No one plays harder than us, and it shows up every week. Tremendous showing and our kids fought, (giving) us a chance to win at the end, (but) it just didn’t happen.”

Why did the Lions go for two instead of tying the score with a PAT?

“They’re a really good team,” Thomas said. “The longer the game went on, we thought probably is to their advantage, especially at home. We played for the win and (hoped) to end it right there. Obviously, if the ball bounced our way, it’s a different outcome, but it’s what it is and I’m proud of our players.”

Now, the Wolves will get another game against rival Hamilton, this time for all the marbles. The Open Division state final is scheduled for 6 p.m. next Saturday at Desert Vista High School.

“We’re going to celebrate tonight and come Monday, it’s all work,” Sanders said. “We (will) forget about this when we’re prepping for Hamilton and Round 2.”

Breaking down each of this week’s semifinal matchups

Looking back at a crazy quarterfinals Friday