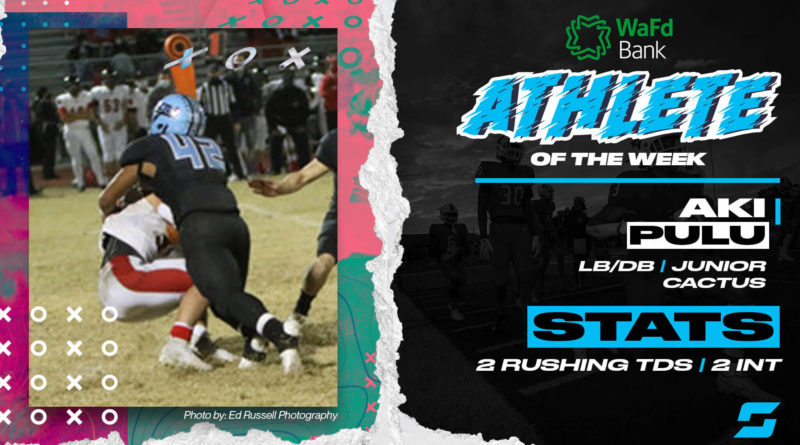 Pulu was dominant in a 41-7 victory over Coconino with two rushing touchdowns and two interceptions, one of which he returned for a score.

Pulu received 40.16% of the vote, beating out Hamilton RB Noah Schmidt, who finished with 23.48%. Yuma Catholic WR/DB Austin Rush finished third with 13.88% and Boulder Creek RB Jacob Cisneros was fourth with 9.15%. There were more than 15,000 votes tallied this week!

We are currently accepting WaFd Bank Athlete of the Week nominations for the week of Nov. 30-Dec. 6. If you would like to nominate an athlete, please email regan@scorebooklive.com or tag us on Twitter or Instagram at @sbliveaz.

And here are the other athletes who were nominated for Nov. 23-29:

Rodney Clemente, Hamilton RB: Clemente also was dominant on the ground for the Huskies, running for three touchdowns and well over 100 yards in the game’s first two and two-thirds quarters.

Eli Sanders, Chandler RB: In a 50-0 trouncing of Desert Edge, Sanders went for three rushing touchdowns, 101 rushing yards and 55 receiving yards — in the first half. He finished with more than 200 yards of total offense.

Mikey Keene, Chandler QB: Chandler scored most of its touchdowns on the ground, but in the first half, Keene completed 22 of 31 passes for 315 yards. He finished with two passing touchdowns.

R.J. Keeton, Casa Grande RB: Keeton ran for three touchdowns and 214 yards to go with 42 receiving yards in a 47-30 win over Peoria.

Bear Milacek, Boulder Creek QB: Milacek ran for 175 yards and passed for 135 yards and a touchdown.

Gage Dayley, Highland QB: Dayley passed for four touchdowns and a two-point conversion in a 30-20 win against Casteel.

William Haskell, Ironwood QB: Haskell led an incredible comeback from down 27-7 late in the third quarter for Ironwood, which earned its first playoff win since 2005. He finished with two passing touchdowns, two rushing touchdowns and a receiving touchdown on a trick play.

Ty Thompson, Mesquite QB: Thompson threw for two touchdowns and ran for one in a 27-10 win over Northwest Christian.

Richard Stallworth, Yuma Catholic QB: Stallworth ran for a touchdown and completed 27 of 40 passes for 423 yards and three touchdowns in a 43-20 win over Thatcher.

Austin Rush, Yuma Catholic WR/DB: Rush had 115 yards receiving with a touchdown, and he added an interception on defense.

Brady Overson, St. John’s DL: Overson led a strong defensive effort in a 22-21 win against Scottsdale Christian Academy with six tackles for loss and an interception.

Logan Hubler, American Leadership Academy – Queen Creek QB: Hubler completed 19 of 29 passes for 348 yards and three touchdowns, and he ran for a touchdown in a 40-14 win over St. Mary’s.