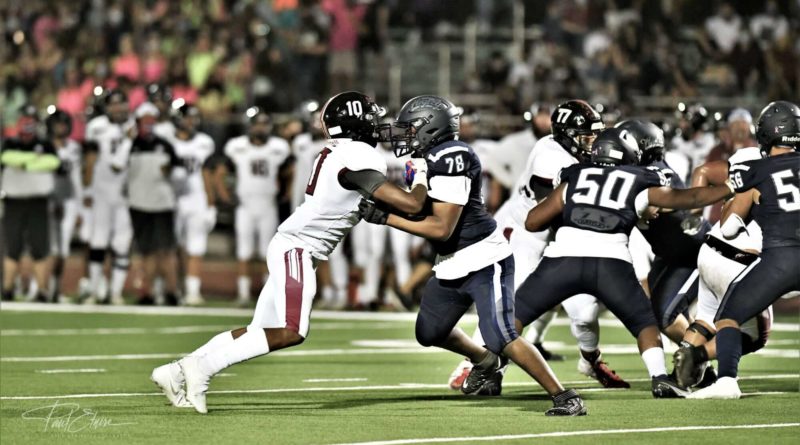 As part of our high school football preview in September, we presented the top “players to watch” for each 6A team for the 2020 season.

It’s never an exact science, though, and every year, new standouts emerge in the fall who weren’t on the radar in the summer.

Late in the regular season, we asked coaches to tell us about their “new stars” — that is, players who weren’t on the preseason watch list but who emerged as key contributors in 2020.

The 5-9, 165-pound junior wasn’t on the radar at the start of the season but ended it as the only Week 1 starter still starting in the Broncos’ final game. Injuries and quarantines took their toll on Brophy Prep’s season, but Minton filled in at safety and corner, finishing with 35 tackles and three pass breakups. He also returned kickoffs and punts. “He is the ultimate team player, doing whatever the team needed while playing with a broken finger himself,” Broncos coach Jason Jewell said.

Washington, a 6-0, 175-pound sophomore, initially was slated to play cornerback but moved to safety and had a solid first varsity season. He finished the regular season with 22 tackles, four interceptions and three pass breakups.

The 5-9, 195-pound junior stepped into a starting role this fall and finished with 28 tackles, seven tackles for loss and three sacks, second on the team in all three categories.

A pleasant surprise for the Lions has been the play of Cortez, a 5-8, 190-pound senior who went from fringe player a year ago to the team’s top tackler this fall with 78 during the regular season (seventh in 6A). “He gets into the mix and makes a ton of plays for us,” Liberty coach Colin Thomas said. “He just finds a way to get guys down.”

The Pioneers needed to replace three all-region linebackers this season and turned to Weaver to fill one of those spots. The 6-0 junior led the team with 43 tackles (seven for loss) to go with two forced fumbles and two fumble recoveries.

It’s easy for the 5-9, 160-pound junior to get lost in the mix of sure-fire Power 5 talent surrounding him, but he’s made himself into one of the Wolves’ top players on defense this fall, with 46 tackles (third on the team), three pass breakups and two interceptions during the regular season. “He’s always around the ball and making plays,” Chandler coach Rick Garretson said. “He can bump over and play free if needed. He’s just a phenomenal football player.”

The 6-3, 205-pound junior, nicknamed “Deuce” by coaches and teammates, blossomed after a quiet season opener into one of the state’s best pass rushers. In his final six games of the regular season, he had 13 tackles for loss, nine sacks and 12 hurries. “He just outworked everybody with his relentless effort,” Huskies coach Mike Zdebski said. “He’s a sophomore age-wise, and he’s going to develop, but he’s got speed, athleticism and a great motor. He goes full speed all the time.”

At 6-2, 195 pounds, the junior is undersized for his position, but he has come up big for the Hawks all year — he was third on the team with 30 tackles and second with five tackles for loss during the regular season. “He’s had some great games against tough competition,” Highland coach Brock Farrel said. “He’s quick, and his motor is always going.”

The 5-10, 180-pound senior played a bit role in 2019 but made himself into a Week 1 starter through his understanding of the Knights’ defensive schemes. He moved between free and strong safety, finishing with 47 tackles (third on the team). “His high IQ and just figuring out where he fits as a puzzle piece set him apart,” Higley coach Eddy Zubey said.

The 6-3, 215-pound sophomore came into his own during the second half of the season, posting back-to-back 10-tackle games against Highland and Pinnacle. He finished with a team-high 34 tackles (five for loss) and two sacks.

Sherwood, a 5-10, 185-pound senior, faded during the second half of his first season as a starter last fall, but that wasn’t the case this year. He had double-digit tackles in each of the Colts’ last six regular-season games to finish with a team-high 80. He recorded two interceptions.

The 6-3, 195-pound senior was a returning starter but lightly regarded on the recruiting circuit, but after a regular season in which he made 114 tackles (second in the state behind Utah-bound teammate Trey Reynolds), he’s drawn interest from FBS and FCS programs. “He’s just more comfortable with his role in our scheme and playing free, letting his athleticism take over,” Bulldogs coach Joe Germaine said. “He’s just been unbelievable for us.”

The 6-2, 195-pound senior finally got his chance to shine under the Friday night lights and made the most of his opportunity, finishing second on the team with 59 tackles to go with two sacks and two forced fumbles.

Black Hawks coach Steve Campbell lists the 6-0, 180-pound junior at outside linebacker and free safety, but he’s really a jack-of-all-trades, playing strong safety and even some corner. He moved up from the JV this fall and finished with 50 tackles. “Just his versatility stands out,” Campbell said. “We always tell kids, if you can do more than just one aspect of the game, we will find a place for you. He’s physical enough to play safety but can turn his hips well enough to play corner.”

The 5-11, 205-pound senior used the offseason to good effect, gaining 20 pounds of muscle and becoming stronger. He led the Aztecs with 53 tackles (six for loss) and five sacks during the regular season after making 39 tackles all of last year. “He’s gotten bigger and stronger, and he got smarter on every play,” coach Jon Becktold said.

Goodenough, a 5-11, 170-pound junior, played one game as a sophomore for the Mustangs but became a full-time starter this fall, finishing with 35 tackles and three pass breakups.

The 6-3, 232-pound senior came back this fall and seized a starting role after missing most of his junior season. He had a monster game against Desert Edge in Week 5 (17 tackles) and finished the year with 68 tackles, a team-high six sacks and four pass breakups.

Anderson, a 6-0, 180-pound junior, debuted on the varsity with a nine-tackle game against Mountain Ridge and kept going strong, finishing third on the team with 44 tackles (three for loss), three pass breakups and three quarterback hurries.

The 5-10, 180-pound senior complemented all-region linebacker Jerron Smallcanyon in the middle of the defense, finishing second to Smallcanyon on the team in tackles with 63 (four for loss).

The 6-1, 195-pound senior returned from a torn ACL that cost him his junior season to finish with 35 tackles (2½ for loss) and four hurries. “Some people struggle coming back from that injury, and we didn’t know how much of an impact he’d have,” Bears coach Chris McDonald said. “But he’s stepped up for us this year, especially the last six games.”

Chavez, a 5-9, 165-pound sophomore, quickly became one of the team’s top defensive players, reaching double figures in tackles in three consecutive games and finishing with 41 tackles and two pass breakups.

The 6-1, 190-pound senior became a consistent force in the linebacking corps, finishing with 42 tackles (two for loss), second on the team.

The 5-7, 160-pound senior announced his presence in Week 3, when he sealed a victory over Red Mountain with a late interception while wearing a cast on his arm. He finished the season with 55 tackles (five for loss), three sacks, three pass breakups and two interceptions. “Just a great young man and a hard worker,” Toros coach Micah Fell said.

Wright moved from starting strong safety as a sophomore to slot receiver as a junior, then back to defense as an outside linebacker, where the 6-0, 175-pound senior finished the regular season with 45 tackles (second on the team) and three pass breakups. His tackle on a two-point conversion attempt saved a victory over Brophy Prep that proved critical in the Jaguars earning the No. 1 seed in the 6A playoffs. “He just found a home for us on defense and really came on this year,” coach Anthony Casarella said. “He’s really good on the edge, a very good tackler and hard hitter. It’s really hard to get around him on the outside.”

The 5-10, 200-pound junior became a key contributor for the Mountain Lions this season after moving up from JV, finishing second on the team with 47 tackles (3½ for loss). He also had an interception.

Playing alongside all-conference candidate Brandon Craddock, the 5-8, 195-pound sophomore more than held his own, finishing with 53 tackles (eight solo), third on the team.

First-year coach Sean Hegarty only had film of Palelei, a 6-2, 190-pound junior transfer from Cleveland, Tenn., to judge him by when the former all-region player arrived on campus over the summer. After watching him dominate this fall, racking up a team-high 67 tackles (11 for loss), seven sacks and 14 hurries, Hegarty calls him “an incredible blitzer who times them really well. He adjusted into his role on our team amazingly well. His contributions have been a huge part of our success.”

The 6-0, 210-pound senior had made two career tackles entering the season but quickly established himself as an important member of the Monsoon linebacking corps. He finished second on the team with 43 tackles.