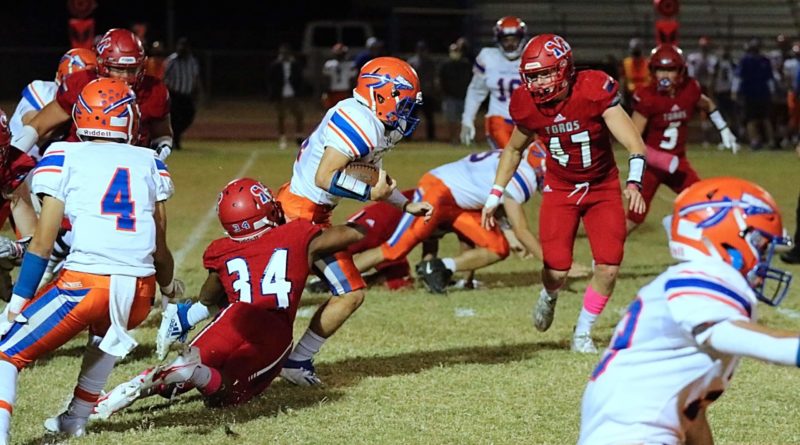 As part of our high school football preview in September, we presented the top “players to watch” for each 6A team for the 2020 season.

It’s never an exact science, though, and every year, new standouts emerge in the fall who weren’t on the radar in the summer.

Late in the regular season, we asked coaches to tell us about their “new stars” — that is, players who weren’t on the preseason watch list but who emerged as key contributors in 2020.

The 5-8, 195-pound junior saved his best for last for the Broncos, running for a career-high 96 yards on 20 carries in their season finale against Liberty. Because Brophy Prep didn’t have a Week 8 matchup, Lee and his teammates got a head start in the weight room for baseline testing. “Ethan was one of our strongest kids,” Broncos coach Jason Jewell said. “I think he can have a big impact for us in 2021.”

It was only a question of when the 5-8, 180-pound sophomore would enter the running back mix considering the depth the Coyotes have at the position, but Clark’s play eventually forced coach Richard Taylor’s hand. He rushed for 507 yards and seven touchdowns in the final two weeks of the regular season to power the Coyotes from out of the Open playoff picture to the No. 4 seed with wins over Chaparral and Liberty. He entered the playoffs with a team-high 880 yards (fifth in 6A) and nine touchdowns on 105 carries.

The 6-2, 310-pound senior started for the second year for the Firebirds and established himself as a consistent power blocker, finishing the regular season with 13 pancake blocks — second on the team to Northern State commit Mason Osborn’s 30.

The 6-2, 210-pound senior moved from linebacker to play tight end for the first time this fall and became one of quarterback Brock Mast’s favorite red-zone targets with a team-high six touchdown catches among his 17 receptions for 322 yards during the regular season. “Tight end is a big position in our offense, and he’s gotten better every game,” Lions coach Colin Thomas said. “He’s been a pleasant surprise for us.”

The 5-7, 205-pound sophomore was called up midway through the season to fill the void left by an injury to senior Anthony Ament, who recently committed to Oregon as a preferred walk-on. Rucker led the Pioneers with 229 rushing yards and a touchdown in just three games.

This is only the second year the 6-5, 285-pound senior has played football, but he’s gone from novice to part-time starter to fringe FCS recruit to now committing to BYU, which put him on its radar after a Cougars coach bumped into Hingano outside Wolves coach Rick Garretson’s office during a visit last year. “He has a bounce to his run and is a very good pass protector,” Garretson said.

The 5-10, 180-pound senior transfer from Chandler became eligible at midseason and made an immediate impact for the Huskies in more ways than one. He instantly formed a 1-2 duo with Noah Schmidt in the backfield, with 302 rushing yards and eight touchdowns in his first four games. He also allowed the coaching staff to use Schmidt and sophomore DeShaun Buchanan more on defense, improving the depth on that side of the ball. “He runs with a little bit of a different style,” Hamilton coach Mike Zdebski said. “He’s got that explosiveness that’s complementary to Noah. It’s good to have two guys back there ready to go.”

The 6-3, 225-pound senior moved to center this fall and solidified a position of need for the Hawks. “He has gotten our offensive line organized and just played really well,” Highland coach Brock Farrel said. “He won’t ‘wow’ you, but he’s a physical kid and our most improved lineman.”

Knights coach Eddy Zubey entered the season wondering who would seize the reins as lead running back. Allen, a 5-11, 180-pound junior, quickly established himself as the No. 1, finishing with 281 yards and two touchdowns on 67 carries and catching 13 passes (two touchdowns) out of the backfield. “He took the job through his play back there,” Zubey said. “Just his breakaway speed, his top-end speed, set him apart.”

The 5-11 junior started the season as a running back but moved to quarterback in Week 3 against Chandler. He finished the season 31 of 53 for 342 yards and three touchdowns and rushed for 211 yards on 47 carries.

The 5-8, 170-pound senior stepped out of the shadows of backing up 1,400-yard rusher Benjamin Blancas, leading the Colts with 426 yards rushing and three touchdowns during the regular season and catching 35 passes for 251 yards and three scores.

The 6-3, 170-pound senior entered the season with one career varsity catch, but he finished the year as the Jaguars’ top receiver with 20 catches for 281 yards and two touchdowns.

Morales entered the season as a highly regarded 5-7, 150-pound sophomore, but Bulldogs coach Joe Germaine wasn’t sure what to expect from him. “It’s a big challenge for a sophomore to come in and play varsity,” Germaine said. Morales proved up to the challenge, catching a team-high 32 passes for 345 yards and three touchdowns during the regular season and handling punt return duties. “He’s been nothing but spectacular for us,” Germaine said.

The 6-1, 175-pound senior had an interesting journey to becoming the Mountain Lions’ top receiver (16 catches for 337 yards and four touchdowns) this fall. The East Valley Tribune detailed how he and twin brother Arthur lived in group homes until they moved in with — and eventually were adopted by — the family of teammate Jesse Wintersteen as juniors.

Kasper, a 6-5, 185-pound sophomore, underwent a big growth spurt last season, necessitating hip labrum surgery that caused him to miss time as a freshman. He showed the potential this fall that has led to offers from Iowa, Iowa State and Arizona State, catching 22 passes for 412 yards and two touchdowns. He and junior LaSjawn Hunter (20 catches) should form a potent 1-2 receiving corps next year. “We knew he would be good, but he hadn’t done anything on the field yet,” Black Hawks coach Steve Campbell said. “He definitely still needs some polishing, but he can freaking fly out there.”

The 5-11, 175-pound senior made the most of his opportunities this fall, catching 19 passes for 325 yards and two touchdowns during the regular season. “He got stronger in the offseason, and that helped him with routes that he struggled with last year,” said Aztecs coach Jon Becktold.

When starter Damyian Duarte missed two games in the middle of the season, the 6-0, 165-pound sophomore gave Mustangs fans a glimpse of what the future might look like, going 27 of 48 for 300 yards and two touchdowns (four interceptions) while posting a 1-1 record against Westwood and Shadow Ridge.

The 6-0, 170-pound junior became a solid No. 2 receiving option opposite star senior Kvon Sutton, finishing with 40 catches for 471 yards and five touchdowns.

Ahlman, a 5-8, 180-pound senior, played solely on defense last year but added running back duties this fall, getting more carries as the season went along. He finished with 225 yards and a touchdown on 53 attempts.

The 5-8, 165-pound junior took over for graduated second-team all-region pick Joshua McClintock and led the Warriors with 351 yards and four touchdowns on 93 carries.

The 6-0, 220-pound junior stepped into the starting lineup this fall and played a critical role for the first-time region champion Bears. “He was one of our more consistent linemen all year,” coach Chris McDonald said.

When lead back Devon Grubbs went down with injuries, the diminutive 5-6, 155-pound sophomore became a key member of the Thunder’s backfield, catching 15 passes (second on the team) and rushing for more than 100 yards for the season.

After the 6-1, 160-pound sophomore transfer from South Mountain became eligible at midseason, he split time with Amier Boyd under center as a traditional pocket passer. He was 18 of 22 for 205 yards and three touchdowns in the Pride’s victory over Desert Vista in the Ahwatukee Bowl, and he finished the season 35 of 49 for 374 yards and five touchdowns.

The 5-6, 150-pound senior entered the season with one career reception and nine carries, but he established himself as a starter from Week 1 and finished second on the Toros in receiving (27 catches for 217 yards and two touchdowns) and rushing (170 yards, one touchdown). He also handled punt and kick return duties. “He’s tough as nails,” said coach Micah Fell.

Jaguars coach Anthony Casarella sees Maras as an eventual heir apparent to all-region lineman Jacob Moore, so this fall, he placed the 6-2, 315-pound sophomore alongside Moore at right guard, “and Jacob’s rubbing off on him a little bit,” Casarella said. “Gage is a big kid and a really hard worker.”

The 6-0, 160-pound sophomore, a distant cousin of Minnesota Vikings receiver Adam Thielen, showed he’ll be a staple in the Mountain Lions offense the next two seasons with 21 catches for 451 yards and four touchdowns in their first six games.

The 6-2, 190-pound junior split time with senior Seth Felts during the regular season, taking over the starting job with two games left and going 18 of 28 for 276 yards and three touchdowns in those starts. He finished the regular season 35 of 58 for 447 yards, four touchdowns and an interception.

Gallardo, a 5-8, 150-pound junior, took over for graduated all-region quarterback Kaiden Lansford and quickly absorbed first-year coach Sean Hegarty’s spread attack. He led the Stallions to the 6A playoffs, completing 60.6 percent of his passes (100 of 165) for 1,441 yards and 22 touchdowns and running for 374 yards and three scores. “The biggest unknown we had was at the quarterback position,” Hegarty said. “We had a three-way battle in the offseason, and the way he’s handled the position in his first year playing varsity football, he’s done a phenomenal job.”

When the Monsoon lost top receiver Liam Kelleher before the season, they turned to Nelson, a 5-10, 160-pound sophomore, to become their No. 1 option. He came up big, catching a team-high 44 passes for 482 yards and four touchdowns.