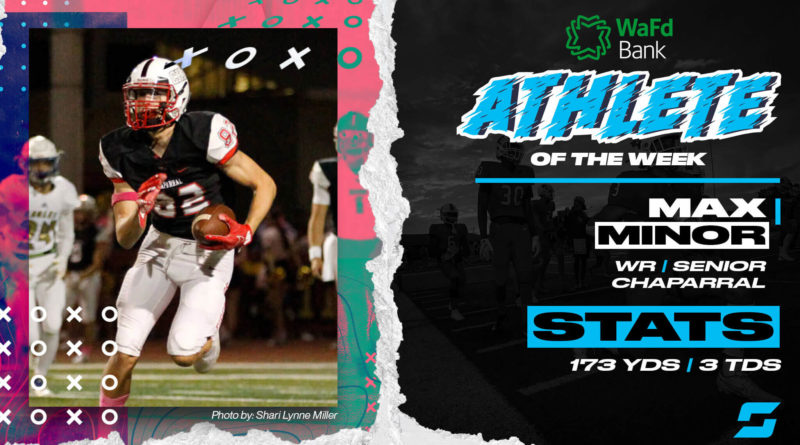 Minor went for 173 yards and three touchdowns receiving in a 52-10 win over Pinnacle.

Minor received 48.91% of the vote, beating out Thatcher RB Mark Wren, who finished with 46.97%. Mountain Pointe TE Kevin Sawitzke finished third with 2.86% and Chaparral QB Brayten Silbor was fourth with 0.49%.

We are currently accepting WaFd Bank Athlete of the Week nominations for the week of Nov. 23-29. If you would like to nominate an athlete, please email regan@scorebooklive.com or tag us on Twitter or Instagram at @sbliveaz.

And here are the other athletes who were nominated for Nov. 16-22:

Hank Pepper, Chandler LB: Pepper had 10 tackles — two for loss — to lead the Wolves defense in the win over rival Hamilton.

Isaac Yates, Shadow Ridge WR/DB: Yates took over for Shadow Ridge in a 21-16 nail-biter over Valley Vista, finishing with three receiving touchdowns and an interception.

Devon Black, Yuma Catholic WR/RB: Black went for three total touchdowns and registered substantial yardage both through the air and on the ground in a 49-0 rout of Bourgade Catholic.

Jordan Middleton, Hamilton OH: Middleton had 20 kills and hit a phenomenal .429 against Perry in the 6A volleyball championship match to help the Huskies win their first state title.

Mark Wren, Thatcher RB: Wren carried the ball 25 times for 253 yards with 3 TDs and a 2 point conversion in a 27-22 playoff win over Arizona College Prep.

Eryn Jones, Millennium OH: Jones had 16 kills and two aces in the 5A volleyball final to help the Tigers sweep Cactus Shadows.

Howard Russell, Phoenix Christian RB: Russell had a receiving touchdown in the first quarter followed by six rushing touchdowns in a 56-27 victory over River Valley.

Jeryll McIntosh, Desert Edge RB: McIntosh rushed for three touchdowns in the first half of a 48-18 win over Verrado.

Kaden Cloud, Williams Field RB: Cloud ran for 165 yards and a touchdown on 14 carries in a 41-0 blowout of Goldwater.

Jacob Cisneros, Boulder Creek RB: Cisneros ran for 169 yards and three touchdowns in a 35-3 win over Sunnyslope. He also led the Jaguars in receiving yards with 50.

Brandy Kishbaugh, Salpointe Catholic S: The senior setter had 44 assists in the 4A volleyball final as the Lancers outlasted Notre Dame Prep in five sets.

Max Davis, Highland RB: Davis erupted for 247 yards and four touchdowns on the ground in a 33-22 win against Higley.

Colby Littleton, Queen Creek LB: Queen Creek received major contributions from numerous defensive players in a 27-17 win over Desert Ridge. Littleton recorded 14 tackles (one for loss) and an interception that he returned 26 yards.

Trey Reynolds, Queen Creek LB: Reynolds led the Bulldogs with 15 tackles and intercepted a pass that he returned 51 yards.

Aidan Wizner, Queen Creek DE: Wizner had 11 tackles (one for loss), a sack, a quarterback hurry and a fumble recovery.

Dane Christensen, Casteel QB: Christensen passed for all three of Casteel’s touchdowns in a 20-19 defensive duel over Red Mountain. He threw for 170 yards on an eye-opening 78.1% completion (25 of 32) and ran for 35 yards.

McKenzie Wise, Northwest Christian OH: The Crusaders swept Valley Christian in the 3A volleyball championship match thanks in large part to Wise’s 16 kills.

Brandon Craddock, O’Connor LB: Craddock led the Eagles with 14 tackles and four tackles for loss in a 31-3 victory over Mountain Ridge.

Caleb Jones, Basha RB: Jones ran for 164 yards and a touchdown on 14 attempts.