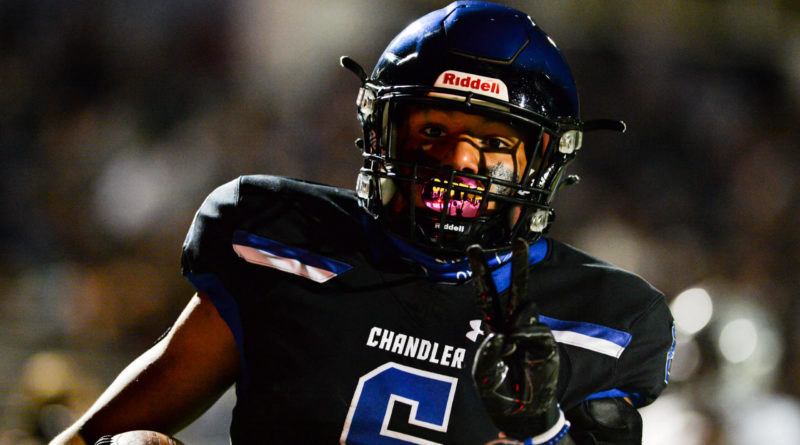 The Arizona high school football playoff brackets were released over the weekend, and this week we’ll be analyzing each of the playoff fields. Here’s a look at the Open bracket.

Photo by Will Edmonds

Chandler’s 34-14 victory over Hamilton in the Battle for Arizona Avenue should have put to rest any possible doubts that the Wolves would enter the postseason as the overwhelming favorites to win a fifth consecutive state championship.

Was the win any less impressive given that Huskies quarterback Nicco Marchiol left the game with a shoulder injury in the third quarter? Marginally — because by that point, the Wolves had already started to wear down the Huskies, just as they have done to their previous 32 opponents during their current run (81-8 record and five titles in the past six-plus seasons).

“There’s a culture here at Chandler,” coach Rick Garretson said. “It’s something lived by these kids. But now it’s one-and-done. When it’s all said and done, we’ve got three more games to make things happen.”

Hamilton: Here’s hoping the injury to Marchiol doesn’t turn out to be a season-ender, because that would be a severe blow to the Huskies’ title hopes. Sophomore backup Roch Cholowsky is an excellent athlete and a UCLA baseball commit, but it’s a tall task to ask him to take over at this stage against the type of opponents the team will face the rest of the way.

Saguaro: The AIA committee made the right choice to elevate the Sabercats into the Open Division field. Saguaro has seen as many schedule changes because of COVID-19 circumstances as any program in the state and shouldn’t have suffered for it. A potential rematch of last year’s Open semifinal with Hamilton looms. The Huskies won their Week 4 matchup, 13-7.

Centennial: The Coyotes are much improved from the team that Hamilton blew out 42-0 in the opening week of the season. Their only loss since was in Week 5 to Chandler, a 31-7 defeat in which they acquitted themselves well, and they beat district rival Liberty 34-24 on Friday in what turned out to be a preview of their Open quarterfinal matchup.

Liberty won last year’s 6A state championship, and through three weeks, it looked as if the Lions would be defending that title. A four-game win streak, snapped Friday by Centennial, propelled them into the Open, and they appreciate the chance to avenge last week’s loss.

If you’re going against chalk and picking anyone but Chandler, you haven’t paid attention this season. The Wolves are No. 3 in the SBLive Power 25 for good reason. With FBS prospects lining up at almost every position (and FBS-caliber players backing some of them up), it will take a supreme effort to knock them off.