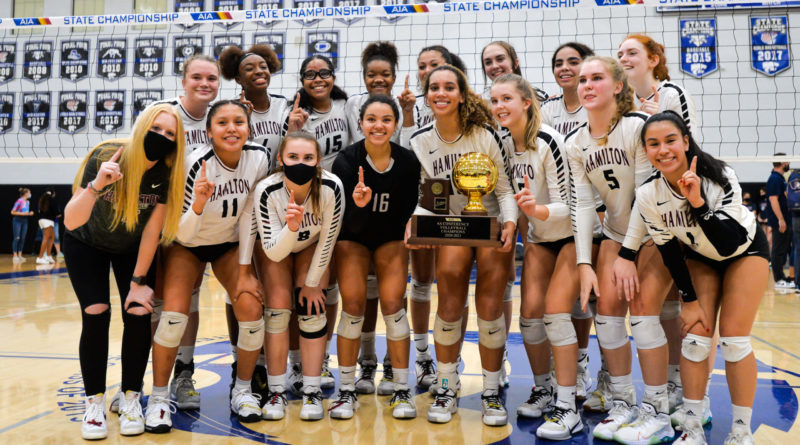 By Brittany Bowyer | Photos by Will Edmonds

GILBERT — The Hamilton Huskies made school history Saturday when the volleyball team won its first 6A state championship, defeating the Perry Pumas 3-1 at Mesquite High School.

Perry entered with an 18-0 record, but Hamilton was hungry for victory.

“We had nothing to lose. We weren’t supposed to win,” Huskies coach Sharon Vanis said. “It’s just a group of kids that like each other and wanted to get this done, and they did it.

“Sometimes with kids, if they put their mind to it, they can do anything — and they did.”

The Huskies’ outstanding performance was led by senior Jahara Campbell and juniors Micah Gryniewicz and Jordan Middleton. For Campbell, it was the moment she’d spent her entire high school career waiting to experience.

“I transferred to Hamilton to win a state title, and we did it. My senior year, we did it,” Campbell said.

Added Middleton: “It’s still so unreal to me. The last play keeps replaying in my head, every single good play, bad play, the whole game. The fact that we just made Hamilton history, that’s just amazing to me.”

The Huskies had faced Perry twice this season, dropping the first match 3-2 and the second 3-1. Determined to avenge the previous losses on the biggest stage, Hamilton remained focused throughout the match despite what definitely would be considered a packed house — especially in today’s COVID-19 environment.

“I said, ‘There is no way the same team is going to beat this team three times,’” Vanis said.

“Perry is just a great team. We told our girls if we didn’t play close to perfect, we didn’t stand a chance.”

Hamilton jumped out to a 6-1 lead in the first set, but it didn’t last long as Perry quickly battled back to tie the score at 6-6. From there, the Pumas ran away for a 25-19 first-set win, largely led by sophomore Avery Burns and senior Alyssa Montoya.

“We got out to a good lead, but we lost focus and they took advantage of it,” Vanis said.

The Huskies were able to refocus for the second set, engaging in a nail-biting back-and-forth battle to begin. After tying it at 9-9, Hamilton went on a tear, scoring nine consecutive points.

Everyone inside the gym could feel the energy and momentum shifting from Perry and toward Hamilton as the Huskies’ aggressive offense looked hard to stop. This is when Gryniewicz started to heat up, helping to secure a 25-12 win that evened the score at 1-1.

Late in the third set, Perry erased a deficit and made it 22-22, forcing Vanis to call a timeout. Hamilton used that time to regroup and came back out to close the set, 25-22, with the set point coming on a kill by Middleton.

The fourth set found the Huskies out to an early 7-2 lead, and from there, it was basically lights out. Hamilton’s dominant trio continued to find new places and ways to put the ball down on the court en route to a 25-18 win, with the match point coming on a kill from Campbell.

“I really believe in the talent of this team and the coaching. No matter what position we were put in, I knew we would pull through,” Gryniewicz said. “They’re talented, but our chemistry is just there, and we really know how to pull it all together.”

Vanis talked about what a major milestone the win is for the program.

“We’ve had three state runner-up trophies, but we’ve never been able to get that final one,” she said. “Now the monkey’s off the back, and we’re coming back next year. That’s our attitude. That’s our mentality.”

The Huskies certainly have the respect of Perry coach Fred Mann.

“That’s a physical team. They’re a good team, you know,” Mann said. “They passed well, they played well, and Sharon and that team deserve a lot of credit.”

Campbell is one of two seniors on Hamilton’s roster. Next year, all eyes will be on Gryniewicz and Middleton to see how much they’ve improved during the offseason and how well their leadership skills continue to develop. Campbell expects them to step up and lead another Huskies’ run.

“They both pushed me so hard just to be a better player,” Campbell said. “They’re already so amazing, I can’t wait to see what they do.”