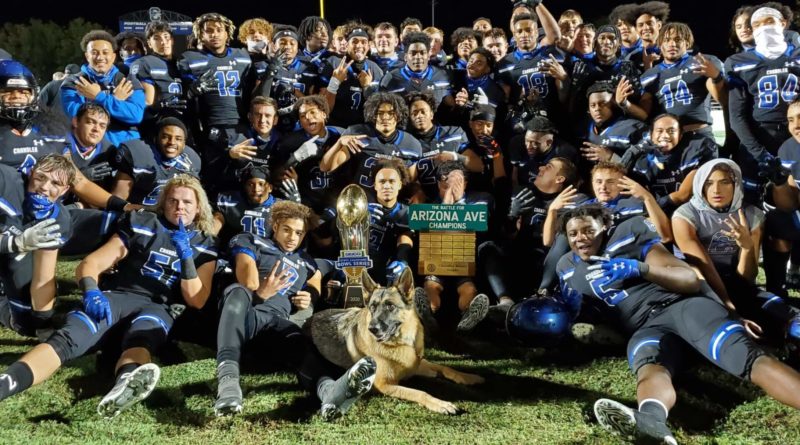 By René Ferrán | Photos by Will Edmonds

A year ago, the Battle for Arizona Avenue came down to the final play before Chandler eked out a victory against archrival Hamilton.

Friday night’s revival of the rivalry at Chandler High School looked for 24 minutes like it might have a similar finish. The Huskies and Wolves dueled to a near draw before a national audience on ESPNU, with Chandler taking a three-point lead into the locker room.

When the teams emerged after halftime, though, the Wolves kicked into another gear — one that 32 previous opponents know all too well. They pulled away for a 34-14 win for their eighth consecutive victory over their Arizona Avenue rivals, 33rd straight win overall and 40th in a row against in-state opponents.

“This is my senior year, the last time I’ll be playing Hamilton, and I wanted to go out with a bang,” Sanders said.

Depending on how the playoff bracket shakes out, though, these teams might find themselves meeting again in a few weeks with more than the Arizona Avenue trophy on the line.

Chandler (7-0), ranked No. 3 in the latest SBLive Power 25, scored on its first two possessions of the third quarter to take control of what had been a see-saw battle. The victory should cement the Wolves’ spot atop the Open Division field when the AIA announces the eight-team tournament Saturday afternoon.

Hamilton (6-1), No. 24 in the Power 25, also should qualify for the second edition of the Open state playoffs. Huskies fans were left holding their breath, however, after watching junior quarterback Nicco Marchiol leave with about 4½ minutes remaining in the third quarter with an apparent shoulder injury.

By that point, the Wolves defense, led by senior linebacker Hank Pepper (10 tackles, two for loss), had dialed in after looking shaky at times in the first half. The Huskies gained 153 yards in the first half and took advantage of four penalties that resulted in first downs to keep pace with Chandler, but they managed 37 yards in the second half.

Marchiol’s 2-yard sneak with 4:25 left in the first half put the Huskies ahead 14-10. The Wolves answered with an 11-play drive, capped by a 17-yard strike on third down from Keene to Jalen Richmond to put the hosts ahead to stay.

“We just stayed with our composure,” Sanders said. “I just trusted my teammates. My O-line always shows up to play. I just saw the hole and I hit it.”