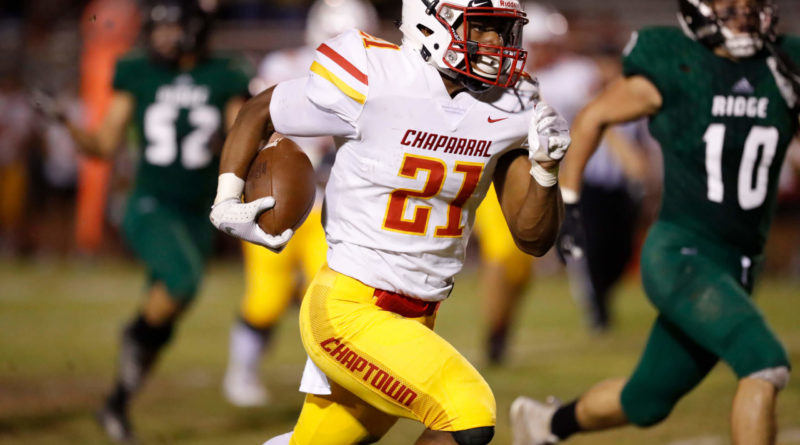 With the regular season winding down and awards announcements around the corner, we take a look at some of the top offensive player of the year candidates in each 6A region.

Note: All statistics through Nov. 19. Teams in Region 6 (Desert Southwest) have not played a full season and are postseason ineligible. Jared Williams photo by Shari Miller – SLM Images.

Brayten Silbor, QB, Chaparral: The junior is averaging 302 yards per game while completing 61 percent of his passes in the Firebirds’ first four games since returning from COVID-19 quarantine.

Brock Mast, QB, Liberty: The senior leads the region with 1,658 yards passing, and his steady play (12 TDs, 0 interceptions) has played a big part in the Lions’ four-game win streak since a 1-2 start.

Dorian Singer, WR, Pinnacle: The Tartan, Minn., transfer has been as good as advertised through six games, catching a region-best 37 passes for 664 yards and nine touchdowns.

Jared Williams, RB, Chaparral: As Williams goes, so go the Firebirds. In their two victories, he’s run for 322 yards and six touchdowns; in two losses, 95 yards and one score.

James Scott/Kavaughn Clark, RB, Centennial: The 1-2 Coyotes backfield tag team has combined for 1,114 yards and 13 touchdowns on 151 carries. The best part for Centennial fans — neither is a senior.

Eli Sanders, RB, Chandler: The Boise State commit went over 100 yards in the Wolves’ first four games and returned from a third-quarter injury suffered against Centennial to run for 74 yards and two touchdowns against Highland.

Kai Millner, QB, Higley: The senior has been everything Cal could have hoped to see before heading to Berkeley, leading the region with 1,720 passing yards (61.4% completions) and 12 touchdowns.

Max Davis, RB, Highland: A two-game stretch during which the senior amassed more than half his region-leading 1,008 rushing yards announced his candidacy with authority.

Mikey Keene, QB, Chandler: The Central Florida commit hasn’t made many mistakes in directing the Wolves offense, throwing for 1,333 yards (72.6%) and 16 touchdowns against one interception.

Nicco Marchiol, QB, Hamilton: The Colorado transplant will be one of the state’s top recruits next year. He’s a two-way threat with 1,139 passing yards, 396 rushing yards and a combined 10 TDs.

Devin Brown, QB, Queen Creek: The junior has demonstrated why he’s headed to USC in 19 months, completing 69.7% of his passes for 1,506 yards and 17 touchdowns against three interceptions.

Dominic Digian, TE, Casteel: The senior leads tight ends in the state with 46 catches for 529 yards and seven touchdowns.

Isaiah Newcombe, WR, Casteel: The UCLA commit has made several highlight-reel plays while leading the state with 60 catches for 744 yards and six touchdowns.

Payton Barlow, RB, Queen Creek: Barlow, a junior, has spearheaded the Bulldogs’ three-game win streak, going over 100 yards in each game to take the region lead with 623 yards and five touchdowns.

Anyale Velazquez, RB, Corona del Sol: Velazquez has played a big part in the Aztecs’ resurgence this season — the junior leads the region with 876 yards and 12 touchdowns.

Craig Montgomery, RB, Mesa: The junior has gone over 100 yards each of the past two weeks to move into second in the region with 595 yards and six touchdowns.

Gabby Mendoza, QB, Mesa: The three-year starter is having a solid season for the Jackrabbits, leading the region with 1,329 yards (57.4% completions) and 14 touchdowns.

Kvon Sutton, WR, Mesa: The senior has broken through this season to lead the region with 42 catches for 591 yards and six touchdowns.

Quade Swearingen, QB, Corona del Sol: The senior hasn’t put up flashy numbers, but he’s turned the ball over only three times, completed 75.5% of his passes for 1,195 yards and 13 touchdowns, and run for four scores.

Amire Boyd-Matthews, QB, Mountain Pointe: The South Mountain transfer has had a solid junior season despite the Pride going 0-7, completing 58.3% of his passes for 646 yards and rushing for 316 yards.

Demond Williams Jr., QB, Basha: The freshman has shown no fear of the Friday night lights, leading the Bears back from an 0-2 start to win the region title, completing 63.4% of his passes for 1,335 yards and 12 TDs.

Reese Marziale, RB, Mountain View (Mesa): The junior leads the region with 605 yards and eight touchdowns, running for a career-high 146 yards in Week 7 against Basha.

Bear Milacek, QB, Boulder Creek: The senior has been a dual threat under center for the Jaguars, throwing for 972 yards (67.3% completions) and nine touchdowns and running for 392 yards and eight TDs.

James Groff, WR, Sandra Day O’Connor: He’s been a big revelation for the Eagles this fall — the senior has caught 37 passes for 599 yards and nine touchdowns.

Seth Gallardo, QB, Shadow Ridge: The junior took over starting quarterback duties for the Stallions and has thrown for a region-leading 1,318 yards and 19 touchdowns, completing more than 63% of his passes.

Zach Sutton, WR, Shadow Ridge: Sutton, a senior, leads the region in all three receiving categories with 38 catches for 668 yards and 12 touchdowns.