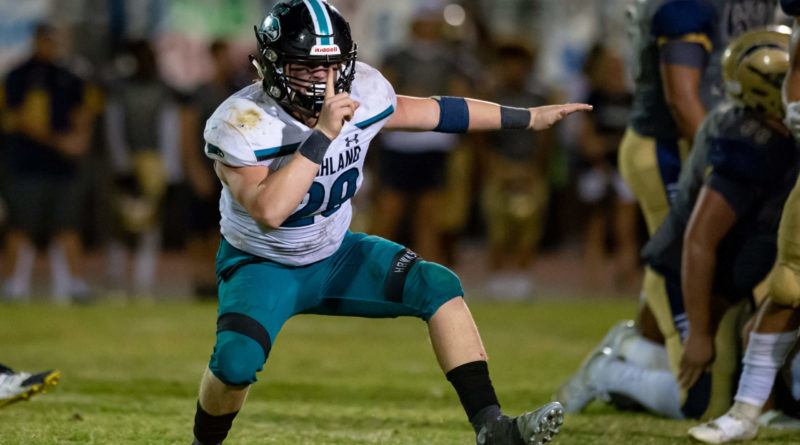 With the regular season winding down and awards announcements around the corner, we take a look at some of the top defensive player of the year candidates in each 6A region.

Note: All statistics through Nov. 19. Teams in Region 6 (Desert Southwest) have not played a full season and are postseason ineligible. Kam Cullimore photo by Donna Mundy Photography.

Anthony Franklin, DT, Pinnacle: The senior ranks among conference leaders in tackles for loss (10) and has four sacks among his 27 tackles.

Anthony Lucas, DT, Chaparral: Lucas has demonstrated why he’s the top Class of 2022 recruit in the state with 24 tackles (nine for loss) and four sacks in four games.

DJ Gleash, DE, Centennial: The senior leads the region with 10 sacks and has 58 tackles and five hurries.

Koltan Cortez, LB, Liberty: The senior has delivered a breakthrough season for the Lions with a region-leading 73 tackles (2½ for loss, 1½ sacks).

Brandon Buckner, DE, Chandler: The Oregon commit has seven tackles for loss and six sacks among his 25 tackles for the Wolves.

Hank Pepper, LB, Chandler: He’s not only one of the top senior long snappers in the nation, the San Diego State commit also leads a defense that’s allowing seven points per game with 54 tackles.

Kam Cullimore, LB, Highland: The senior leads the region with 64 tackles (four for loss) through six games for the Hawks.

Jack Howell, FS, Hamilton: A Colorado transplant for the Huskies, the Colorado State commit leads the team with 56 tackles and four pass breakups.

Carson Speer, LB, Williams Field: The senior has been a tackling machine for the Black Hawks the past two seasons — his 67 this year rank third in the region, with eight for loss and 3½ sacks.

Colby Littleton, LB, Queen Creek: His 75 tackles would top many regions, but the senior is only second on his team (see below).

Shakaun Bowser, DE, Casteel: The junior leads the Colts with six tackles for loss and five sacks among his 41 tackles.

Trey Reynolds, LB, Queen Creek: The Utah commit leads the region and is second in the conference with 91 tackles.

Alex Sanchez, LB, Skyline: It’s been a disappointing season for the Coyotes, but the senior has been a bright spot with a region-high 87 tackles and three blocked field goals.

Zeke Branham, SS, Skyline: The senior has been one of the top two-way players in the region, ranking among the leaders with 64 tackles (three for loss).

Zeth Nastal, LB, Mesa: The senior ranks among the region leaders in tackles for loss (five), sacks (five) and tackles (69).

Cayden Camacho, S, Basha: The senior leads the region with 76 tackles (5½ for loss) to go with a team-high three sacks.

Devon Grubbs, SS, Desert Vista: Before the Thunder went into COVID-19 lockdown, the junior averaged a region-leading 13 tackles per game, including 19 in a Week 3 loss to Basha.

Jackson Browning, LB, Basha: Another part of the Bears’ youth movement who has made a difference this fall, the sophomore has averaged 11.2 tackles in his five games.

Brandon Craddock, LB, Sandra Day O’Connor: The junior leads the conference with 93 tackles and has made 12 for loss.

Gabriel Monaco, DE, Sandra Day O’Connor: Another breakthrough standout for the Eagles, the junior leads the conference with 15 tackles for loss (eight sacks) among his 42 tackles.

Leo Palelei, LB, Shadow Ridge: Palelei, a junior, is second in the region with 57 tackles (nine for loss) and five sacks.

Jaelin McCullen, DL, Valley Vista: McCullen has flashed the talent that has made him one of the top Class of 2022 recruits with 12 tackles for loss and 7½ sacks among his 44 tackles.

Richard Wight, CB, Mountain Ridge: The senior leads the region with four interceptions and has made 30 tackles.