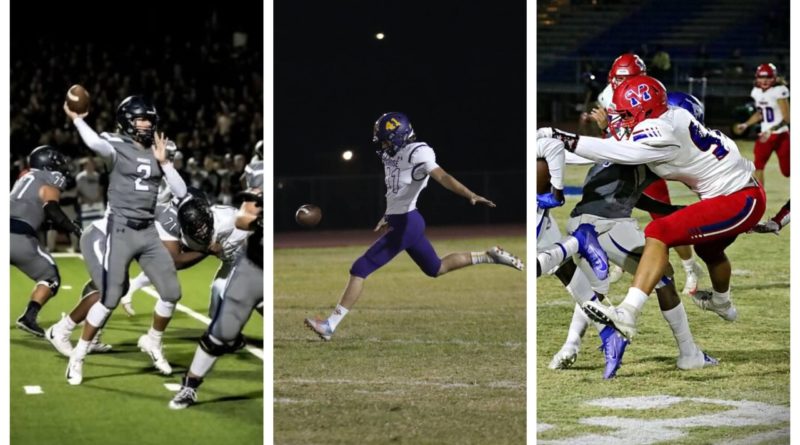 We’ve spent the past two weeks taking a position-by-position look at some of the top players in Arizona high school football:

As a final exercise, we thought it would be fun to imagine what an “NFL roster” of current Arizona high school players might look like.

We did our final cutdown from a 90-man training camp roster to the final 53, and we even included an injured reserve for a couple of outstanding players who have missed most of the season because of injury.

One luxury we have in selecting our 53-man roster is that some high school players go both ways, giving us flexibility and depth that NFL teams typically don’t enjoy. For them, special teams ability is the asset that might keep a tweener on a roster; for us, standout two-way players who provide roster flexibility make a difference. Also, like NFL teams, we have extra linebackers and defensive backs who will find the field on kick coverage units.

We invite comments as to which players would make your final roster — but remember, if you want to add someone off waivers, you have to cut a player to make room!

Our mythical NFL team has an abundance of riches to choose from at the quarterback position. We could invite close to a dozen signal-callers from throughout the state to camp. We eventually chose the state’s No. 1 recruit in Thompson and a Pac-12 commit in Millner for our top two spots. Like many NFL teams, we went with a younger player we could groom as our No. 3, and Stallworth beats out Basha freshman Demond Williams Jr. for our developmental quarterback.

Another deep position from which we could have invited a dozen players without scratching the surface. Sanders and Williams were two All-Arizona candidates at the beginning of the season, and Davis has been a breakthrough player for the Hawks. Burns has demonstrated that Nevada might have gotten a steal when he committed to the Wolf Pack.

Singer hasn’t disappointed since transferring from Minnesota over the summer. Patterson and Lira have been strong No. 1 receivers for two of the state’s top quarterbacks, and Newcombe has virtually cemented his spot on the All-Arizona team. Grayes has committed to Arizona, but that hasn’t stopped Oregon and Ohio State from sniffing around as he’s had a solid junior season with the Wolves.

Robinson gives our quarterbacks a top receiver down the seam, and Swope serves as a hammer as a blocker in the run game. Werner is a jack-of-all-trades who can serve as an emergency quarterback or a sure-handed receiver.

We’re going to appreciate the versatility of this very deep group of offensive linemen. Dieu plays tackle for the Colts but will slide over to guard to join Sfarcioc and Broscious, while Brailsford and Neher — who have played all along the line during their careers — slot in at center. That leaves four FBS commits — Walden (Oregon), Miles (UNLV), Glass (Arizona State) and Mapakaitolo (USC) — to rotate at tackle. Miller would have been a lock to make the team if he hadn’t taken this season off in preparation for enrolling early at Oregon.

Three run stuffers to anchor the middle of our defensive line. Ma’afu has FBS talent but eschewed several offers to commit to Northern Arizona. Franklin recently committed to Stanford, and Lucas will have his pick of FBS schools as the state’s No. 1 junior recruit. Gerle’s injury early in the season took him out of the running after he had 25 tackles for loss and 13 sacks as a junior.

We want disruptive pass rushers who also can set the edge against the run, and we have two of the very best in the nation to start in Buckner (Oregon) and Somerville (Michigan), with one of the state’s most underrated players in Gleash and two top juniors in Ta’ase and Davis to rotate into the game.

Reynolds, a Utah commit, is a virtual lock for an All-Arizona spot. Orr, an Air Force pledge, anchors a Wolves defense that has posted two shutouts and allowed 7.2 points per game. Morris is another top junior who should see his recruiting pick up as coaches see more film of him, and our final spot goes to Zellner, the 5A conference’s top tackler who is one of the state’s most improved players as a senior. Morris (wide receiver) and Zellner (tight end) can play both ways in a pinch.

Monday and Thomas serve as disruptors on the outside who consistently make plays in opponents’ backfields, while Speer has been a tackling machine for the Black Hawks each of the past two seasons. Zayas played inside for the Huskies last year but has moved outside, where he could become more of a playmaker on the perimeter.

Burke was a lock to make the team before suffering a season-ending shoulder injury in the Sabercats’ first game. We’ll still make do with a quintet of talented lockdown corners, with Martin also serving as an electrifying option in the return game. Barney (New Mexico), Ortiz (Minnesota) and Lewis (Nevada) will play Saturdays in the FBS next fall, and Roberts has been a shutdown corner for the Wolves.

Howell (Colorado State), Jackson (Kansas State), Branham and Stam are among their team’s top tacklers as run-stopping safeties who also provide cover in the passing game, while Barth (California) covers tons of ground as a free safety. Howell and Branham also can provide depth at running back if needed.

Black is considered one of the top Class of 2022 kicking recruits on the West Coast. He combines a strong leg (44% of his kickoffs for touchbacks) with accuracy (96% PATs, 7 of 11 field goals).

Ray earned a scholarship to Colorado State and has displayed the consistency throughout his career that we need in our punter.

Pepper also can play linebacker for this team, but he makes the roster for being the consensus top long snapper in the state — a skill he’ll showcase next year at San Diego State.

4A football at midseason

3A football at midseason

2A football at midseason

1A football at midseason