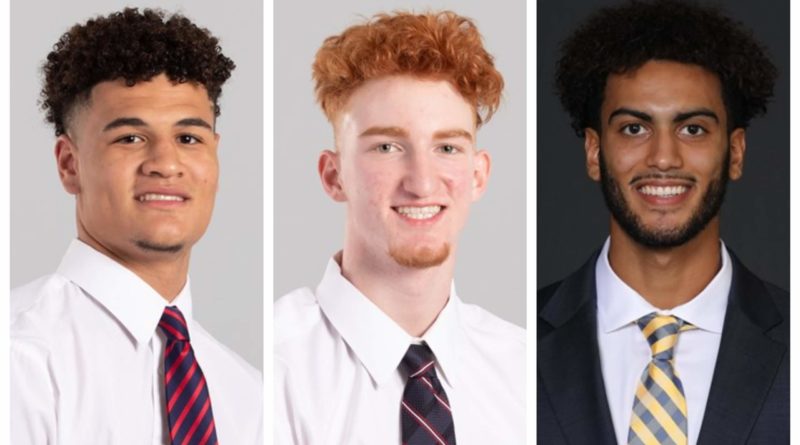 Rescheduled five months after its original June date because of COVID-19 concerns, the 2020 NBA Draft will take place Wednesday at ESPN headquarters in Connecticut, and a few players with Arizona high school ties hope to hear their names called.

Sixty players will be taken during the two-round draft, which will be televised on ESPN (5 p.m. Mountain). Here is a look at five top in-state NBA Draft hopefuls.

Draft position: Late first round or early second round; The Ringer has him No. 18 to Dallas; USA Today pegs him No. 22 to Denver; CBS Sports projects him going No. 23 to Utah; Sports Illustrated has him going No. 32 to Charlotte.

Green attended high school at Mountain Ridge after moving from Australia to Glendale in 2014 but played for the national team at Hillcrest Prep, based out of Precision High School in south Phoenix. He transferred to IMG Academy in Florida before his junior season and became a McDonald’s All-American while leading IMG to the high school national championship as a senior.

In his only season with the Wildcats, he finished third on the team in scoring (12 points per game) and second in rebounding (4.6) and assists (2.6) while making a team-high 46 steals. He projects as a 3-and-D player in the NBA.

USA Today: “Played alongside other talented freshmen at Arizona and established himself with his three-point shot and ability to find his spots in halfcourt sets. Could turn into a solid two-way player.”

Kevin O’Connor, The Ringer: “Fits into any roster as a 3-and-D wing who understands his role as a shooter, slasher and cutter. Energetic on-ball defender with good footwork and anticipatory skills. Needs to improve against contact and with his left hand to become an effective finisher.”

Draft position: Late first round or early second round; Bleacher Report predicts Milwaukee takes him at No. 24; CBS Sports projects him to go No. 37 to Washington; Sports Illustrated has him going No. 39 to New Orleans.

Mannion was born in Italy, but his family moved to Salt Lake City while he was a child and then settled in Phoenix, where he went to Pinnacle. He was a MaxPreps first-team All-American and 6A all-state first-team selection as a freshman before leading the Pioneers to back-to-back state titles in 2018 and 2019, earning Arizona Gatorade Player of the Year honors each season. As a junior, he averaged 30.4 points, 6.2 assists and 6.2 rebounds and was a USA Today All-USA second-team selection and Naismith All-American third-teamer.

He graduated in 2019 after taking online summer courses to accelerate his education, allowing him to enroll at the University of Arizona last fall. With the Wildcats, he was named to the All-Pac-12 second team and the All-Freshman team, averaging 14 points and 5.3 assists per game. He declared for the draft shortly after the season ended.

Kevin O’Connor, The Ringer: “One of the best passers in this class. His physical dimensions may limit his upside, but he can thrive in an offense that shares ballhandling responsibilities.”

Mike Schmitz, ESPN: “Offers a healthy blend of scoring and playmaking at the lead guard spot. Doesn’t have many ways to create separation off the dribble. Needs to become a knockdown shooter given some of his physical limitations.”

Draft position: Late second round or undrafted; CBS Sports projects him to go No. 48 to Golden State; Tankathon has him going No. 54 to Indiana.

Howard enters the draft after a senior season with the Golden Eagles during which he led the nation in scoring at 27.8 points per game and was named a consensus first-team All-American. He finished his career 21st in NCAA history in points and tied for seventh in three-pointers made, holding the Big East record in both categories.

He played two seasons at Perry, averaging 23 points as a freshman in leading the Pumas to the 6A state semifinals and 32.4 points as a sophomore. He transferred to national power Findlay Prep as a junior, leading the team in scoring before reclassifying to the Class of 2016.

He led the nation in three-point shooting as a freshman at Marquette, shooting 54.7%, before blossoming into a top scorer as a sophomore, averaging 20.4 points per game. He earned Big East Player of the Year and second-team All-America honors as a junior, when he averaged 25 points, and became Marquette’s all-time leading scorer in the team’s 2019–20 season opener.

NBC Sports Philadelphia: “Howard can flat-out shoot it and score it. His range and ability to get his shot off in any circumstance are also elite. It all comes down to Howard’s size. There are going to be plenty of questions about whether Howard can deal with the size of NBA guards.”

Peachtree Hoops: “With the NBA continuing to trend toward point guards that are equipped to generate offense via their own shot creation, it would seem that Markus Howard would be an attractive draft prospect. There are two areas of his play that are likely holding him back. He’s an average passer, at best, for his position, and there are questions about his defense that go beyond his size.”

Lee was a two-time 6A first-team all-state selection with the Aztecs, leading them to the state title game as a senior. He committed to Vanderbilt after his junior season at Corona del Sol.

During his time at Vanderbilt, Lee underwent three seasons of turmoil, but he finally broke through as a junior, earning second-team All-SEC honors while averaging a career-high 18.6 points, 4.2 assists and 3.5 rebounds. He declared for the draft after the season and surprised some onlookers by not withdrawing his name before the deadline.

Peachtree Hoops: “Some aspects of Lee’s game seem largely ready to be useful in an NBA environment. In fact, Lee might have been the best pure isolation player in the country during the 2019-20 season. So, why is Lee not showing up higher on projected draft boards? The biggest question is whether or not he will ever be good enough at enough things at the NBA level to ever get to consistently function in isolation and, thus, maximize his strengths.”

The Rookie Wire: “While there is not a clear position for Lee considering he is a bit undersized to play the two, he is extraordinary at getting to the basket and scoring, a potential second-unit scoring leader at the next level if his jump shot develops.”

Jeremy Woo, Sports Illustrated: “Although he’s a bit of a loose cannon on offense, Lee’s athleticism and ability to attack the rim hold a level of intrigue, and he’s an interesting developmental target in hopes he takes a big leap in a better situation.”

Armstrong bounced around throughout his high school career, starting at Carman-Ainsworth in Flint, Mich., then moving to Joseph Wheeler in Marietta, Ga., as a sophomore before transferring to Bella Vista in Scottsdale for his final two seasons.

Bella Vista plays a national schedule, and Armstrong was named season MVP of The Grind Season in 2017-18 and 2019 Grind Session offensive player of the year in helping the team win the Grind Session World Championship final.

Although he committed to Arizona in October 2018, he decided to forego college basketball and signed with the South East Melbourne Phoenix in Australia’s National Basketball League through the league’s Next Stars program. However, he often did not make the Phoenix’s game day rotation, battling injuries throughout the season and making only eight appearances with the team, averaging 2.2 minutes per game.

Carl Berman and Chad Mart, NetScouts Basketball: “An electric, high-flying shooting guard. His first year playing professionally did not turn out the way many would have thought. Although his stats are limited, he remains a young talent with a high ceiling.”