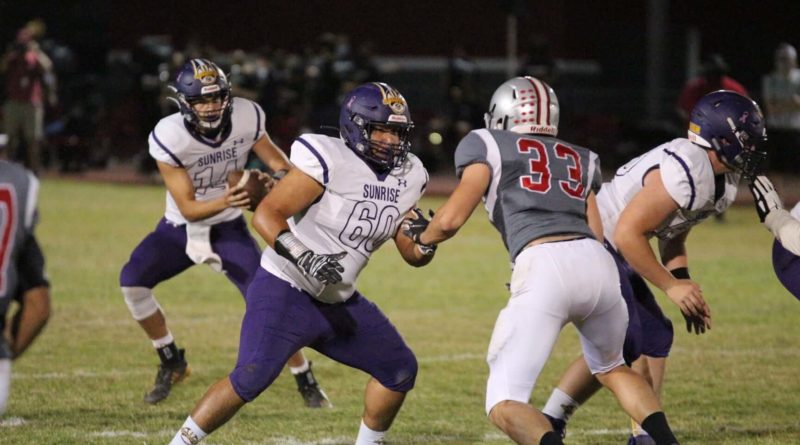 Over the next two weeks, we’ll be taking a position-by-position look at some of the top players in Arizona high school football. Our fifth list focuses on the offensive linemen.

There are hundreds of standout football players in Arizona and these lists are not intended to be comprehensive. Let us know in the comments section which other linemen are worthy of fans’ attention in 2020.

Mason, a second-team all-Premier 6A selection a year ago, received an offer from Northern Arizona before the season. Pumas coach Preston Jones said he believes more offers will be coming because of Mason’s versatility across the line and high motor.

The four-star recruit, ranked No. 14 among offensive tackle recruits nationally by 247Sports (No. 91 overall) and an All-America Bowl selection, has dedicated his senior season before heading to the University of Oregon to his mother, Brenda, who passed away in August. “I always had this on my list and she always supported me,” Walden said during his All-American Bowl jersey presentation last month. “My mother wanted this, too, and she was excited to get to San Antonio, so everything I do now is just for her. So, this means a lot.

“Every snap, every play, every chance I get on that field, I’m going to give it my all for her. I’m laying everything out there and holding nothing back, and I’m really excited to get to compete against the nation’s best.”

Weatherby exploded onto the scene as a junior, going from an unknown quantity to a second-team 3A all-conference selection at center for the Shamrocks. He has received interest from several Division III and NAIA schools.

The Washington State commit was a first-team 5A all-conference selection last year for the Colts. He chose the Cougars over several Ivy League schools as well as offers from Air Force, Oregon, Arizona State and Boise State.

A three-year starter for the Coyotes, Miles committed to UNLV after a junior season in which he earned second-team 5A all-conference honors. He has been selected to play in this year’s Blue-Grey All-American Bowl.

Terrill might be on the smallish side for an offensive lineman at 5-9, 185 pounds, but he helped fuel the Chargers’ run to the 3A state final last year, earning first-team all-Central honors for a second time and making the all-conference first team for an offense that averaged more than 262 yards on the ground.

Avant was a project for the Colts coaching staff when he arrived on campus, but their patience has paid off. He was a first-team all-Southern 5A selection as a junior, and he recently accepted an invitation to play in the Blue-Grey All-American Bowl.

Siqueiros started on the defensive line for the Lancers as a sophomore, making 13 tackles in 12 games. The coaching staff moved him to the other side of the ball last fall, and Siqueiros thrived, earning second-team 4A all-conference honors. He suffered an injury in the season-opening victory over Casa Grande but has returned to anchor the offensive line. “The entire team looks up to him as our leader because of the work that he has put in over the last four years,” coach Eric Rogers said.

Broscious earned first-team 4A all-conference honors last year, when he helped the Scorpions reach the state championship game. He’s ranked by 247Sports as the No. 10 junior recruit in the state and No. 24 among guards nationwide, with a top-eight college list that includes Arizona, Arizona State, California, Colorado and Michigan State.

Stovall was a two-time all-conference first-team selection and a 2019 all-state pick while at Regis Jesuit in Aurora, Colo. He transferred over the summer amid the uncertainty of Colorado’s fall sports season and has helped solidify the Huskies’ offensive line. He has offers from Arizona, Arizona State, Indiana, Michigan State and Utah.

Glass’ father, Paul, played on the defensive line at Arizona State in the early 2000s, but Isaia will make his mark with the Sun Devils on offense after committing to his father’s alma mater in July. The state’s No. 13 prospect according to 247Sports earned second-team all-Central 6A honors as a junior. “Isaia has amazing athleticism for an offensive lineman,” said Bulldogs coach Joe Germaine. “He has a very high ceiling.”

The Arizona Republic pegged Chappelle as a potential breakthrough player before his junior season, and he delivered, earning second-team all-Southwest 6A honors. This year, he’s helped power the Stallions’ 5-2 start while transitioning to first-year coach Sean Hegarty’s spread attack.

Moore will have a decision to make regarding his college sports future. On the gridiron, he’s a four-year starter and two-time all-Desert Valley 6A selection, earning first-team honors last fall. He might have a brighter future on the wrestling mat — he won the 285-pound state title with a 46-2 record in February and enters this season ranked No. 17 in the nation by The Open Mat.

Thunder coaches expected Rodriguez to have a breakthrough season after he was a part-time starter last year. He has an offer from Arizona State.

LeBlanc has started for two seasons for the Pioneers. Position coach Paul Germinaro called him “a technician” as the anchor of the line at center. He has offers from a number of Division III schools. “His technique in pass protection is phenomenal, and he’s becoming a road grader in the run game,” Germinaro said.

As Leighty has improved as an offensive lineman, his time in the defensive front has gone down. His sophomore year, he started eight games on defense, making 17 tackles and receiving all-San Tan 5A honorable mention at offensive guard. Last season, he moved up to second-team all-region and played just four games on defense. This year? He’s played sparingly on defense and become a stalwart up front, opening holes for all-conference running back Caden Calloway.

Durand was last year’s freshman phenom for the Bears, starting from Week 1 and earning honorable mention all-Premier 6A. His older brother, Jonathan, is an offensive lineman at Yale, and James has an offer from New Mexico.

McBride got lost behind three all-region offensive linemen playing for 3A state champion American Leadership Academy-Queen Creek last year, but after transferring to Casteel, he hasn’t been lost to college recruiters. He’s ranked by 247Sports as the No. 32 recruit in the state, drawing offers from Northern Arizona, UAB and Utah and interest from BYU, UCLA and West Virginia, among others.

Miller was a 4A all-conference first-team selection for Salpointe Catholic last season before transferring to Sahuaro in March. After committing to the University of Oregon, the nation’s No. 16 offensive guard recruit according to 247Sports declared in August that he would sit out his senior season, graduate in December and enroll early in Eugene.

Castillo is a four-year starter for the Dust Devils who twice has earned all-Agua Fria 2A honors, including first team last fall, when he also made the all-conference first team. His twin, Diego, shines on the defensive line for Santa Cruz Valley, and even after four years in the program, head coach Rishard Davis said one of his assistants still cannot tell them apart.

Clark announced his presence as a freshman, making the 2A all-conference first team and helping the Elks win the state title.

Sfarcioc was the only returning starter up front for the defending 6A state champion Lions, a far cry from where he first lined up when he arrived on campus as a freshman. “He hadn’t played much football before then, and when I first saw him in the summer, he was playing wide receiver, and I’m thinking, ‘What the heck? That kid is way too big to be at receiver,’” coach Colin Thomas said. “He ended up playing defensive line that year, offensive and defensive line as a sophomore, and has now become a tremendous offensive lineman for us.”

Corfield improved from second-team all-Desert Sky 4A as a sophomore to second-team all-conference last fall, when he helped power the Scorpions to the state championship game. He has offers from FCS schools Morehead (Ky.) State, Southeast Missouri State and San Diego.

Pule started all but one game as a freshman for the Hawks at tackle, earning all-Central 6A honorable mention as well as offers from Arizona State and Utah.

Osborn has ranked among the team leaders in pancake blocks each of the past two seasons. He eclipsed his 2019 total in the Firebirds’ first three games this fall. He’s received offers from FCS Morgan State and Division II Southwest Minnesota State.

Tamayo is a two-time all-Northwest 5A second-team selection for the Mustangs who has played a key role in them sitting fifth in the initial release of the Open Division rankings.

Lutu transferred from one Arizona powerhouse program (Chandler) to another over the summer. He’s listed by 247Sports as the state’s No. 18 recruit in the Class of 2022, with offers from Arizona State and New Mexico.

Fuamatu is a four-year starter for the Tigers who twice received all-Desert West 5A recognition before the program moved to the 5A West I region this fall. He has shifted between tackle and guard while also seeing time at defensive tackle. Fuamatu has received offers from several Division II schools, including Eastern New Mexico and Mary (N.D.).

Oliver looked like he would be a standout defensive lineman when he started his career with the Falcons, earning second-team all-Northeast Valley 5A honors as a sophomore. He shifted his focus to offense last year and quickly became one of the region’s top linemen, getting named to the all-region first team. This fall, he’s helped the team get into the Open Division discussion — Cactus Shadows was ranked No. 10 in the initial release.

Abundis started at tackle for two seasons for the Coyotes, earning second-team all-Northwest 5A honors last year, but coach Richard Taylor this fall moved him inside to guard, which is likely to be his position in college. He’s drawn looks from several FBS schools, but so far, he has offers only from D-III and NAIA programs such as Concordia College in Minnesota and Concordia University in Illinois.

Brailsford earned first-team all-Desert Sky 4A honors last season, and 247Sports rates him the No. 35 offensive guard prospect in the Class of 2022 — although he’s played both guard and center for the Sabercats. He has offers from USC, Michigan State, Arizona and Colorado, among others.

Mapakaitolo started his high school career at Mesa, playing there for two seasons before transferring — first to Red Mountain, then moving to Mission Hills, Calif., where he developed into a three-star recruit at Bishop Alemany. He committed to USC in May, choosing the Trojans over Oregon State, Utah and Washington State. With COVID-19 postponing football in Southern California until the spring, Mapakaitolo decided to return to Red Mountain for his senior season.

Neher was a bit overshadowed playing alongside two 6A all-conference linemen last season, but Wolves coach Rick Garretson calls the three-year starter “the leader of our offensive line.” He has demonstrated he’s fully recovered from an ACL injury suffered in last year’s Open Division quarterfinals. Neher moved from left guard as a sophomore to center last season and back to left guard this fall. That figures to be his position at the next level — he’s received offers from Georgetown, Lamar and Drake.

A year ago, Williams was leading the Pride’s basketball team to the 6A state championship game as a defense-first power forward. This year, he decided to turn out for football for the first time since middle school, hoping to draw the eye of Northern Arizona, where his older brother, Eriq, is a redshirt freshman. Instead, his play in a preseason scrimmage caught the eye of numerous Power 5 schools. He ended up choosing Utah over Arizona State, Boston College, Florida State and Iowa State.