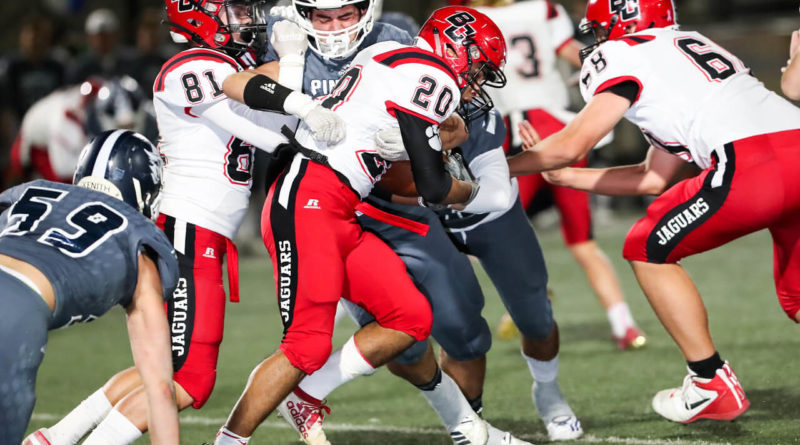 Here’s a look at some of the top performances in Week 7 (Nov. 13) of Arizona high school football.

We will be updating this post throughout the weekend as we receive more statistics. If you know of a top star we should include, please let us know in the comments or tag us on Twitter (@SBLiveAZ).

Yuma Catholic beat Kingman 69-28 and Stallworth finished with surreal numbers. He completed 16 of 28 passes for 410 yards and eight touchdowns — in just one half of action.

Clark ran for four touchdowns and more than 150 yards in a 42-28 win over Chaparral.

Keene passed for four touchdowns and ran for another in a 42-19 victory over Highland. Jalen Richmond was the recipient of two of them.

Sanders had two touchdowns rushing and one receiving.

Chavez ran for three touchdowns and two two-point conversions in a 54-9 thrashing of Tombstone.

Flores threw for three touchdowns and ran for a two-point conversion in one half of action in a 49-0 rout of Dobson.

Keeton ran for three touchdowns in the Cougars’ victory, all coming in one half.

Jacobs ran for a touchdown, scored another on a catch and had a 48-yard kickoff return in a 26-0 win over Horizon.

De Leon ran for four touchdowns and added an 83-yard kickoff-return touchdown in a 49-38 victory over Deer Valley.

On senior night, Neustadter led the Dorados to a 35-6 win over Ironwood Ridge with three touchdown passes and two rushing touchdowns.

Brown threw for four touchdowns in a 57-16 victory over Mountain Pointe.

Barth scored twice on catches and once on an interception return in the Bulldogs’ victory. Miles Molander caught Brown’s other two touchdown passes.

Cisneros ran for three touchdowns and caught a fourth in a 41-14 win over Valley Vista, totaling more than 200 yards of offense.

Bennett rushed for 165 yards and all four of his team’s touchdowns in a 28-7 win over Flagstaff. He became the third player in the city of Flagstaff’s history to run for 1,000 yards in three seasons.

Clemente ran for three touchdowns in a 42-36 win over Higley.

Tobin had three touchdowns rushing and another passing in a 49-7 victory over Scottsdale Prep. He did it all in the first half.

Ginnis was one of numerous Sabercats to bring elite defense in a 26-0 shutout of Horizon. He made eight tackles and three tackles for loss.

Krautz came up big on both sides for the Falcons in a 14-6 season-opening win over Sahuarita. He was responsible for all of their receiving production with 111 yards and a touchdown, and he paced the defense with 10 tackles and two tackles for loss.

Perez also was a force in the front seven with eight tackles and two sacks for 13 yards lost.

In a 49-35 win over Marana, Stevens completed 16 of 24 passes for 278 yards and three touchdowns. He added a rushing touchdown. The Red Wolves also got a strong night from receiver Colby Gaines.

Brower also went off in the victory, rushing 27 times for 181 yards and two touchdowns. He added a 48-yard reception.

Roebuck was dominant despite the loss, finishing with more than 200 receiving yards, two touchdown catches, 10 tackles and an interception.

Fontaine turned seven carries into 155 yards and three touchdowns in a 54-0 trouncing of Willow Canyon.

Greer was unstoppable in a 53-0 blowout of Alhambra, turning 10 carries into 152 yards and three touchdowns. He had 31 yards and another touchdown receiving.

Lydon also came up big for the Bruins with 158 yards and four touchdowns on 10 pass attempts, plus 44 yards rushing.

Ferrin led a staunch defensive effort for the Patriots in a 24-3 win over Northwest Christian with four tackles, two tackles for loss, a sack and an interception that he returned 21 yards for a touchdown. Strong safety Brandon Wettstein also had a strong night on defense for ALA.

Feely led a great defensive effort in a 35-6 victory against Coolidge with 15 tackles, four sacks, two safeties, a forced fumble and a recovered fumble. He also kicked a field goal.

Sutton caught all of Shadow Mountain’s touchdowns and racked up 141 yards receiving in an 18-13 win over Mountain Ridge. He also had an interception.

In a 64-4 blowout of Holbrook, McClelland had the top stat line of the night, if not the entire season: 328 yards and four touchdowns passing, 154 yards and three touchdowns rushing, 15 tackles, a forced fumble and a fumble recovery.