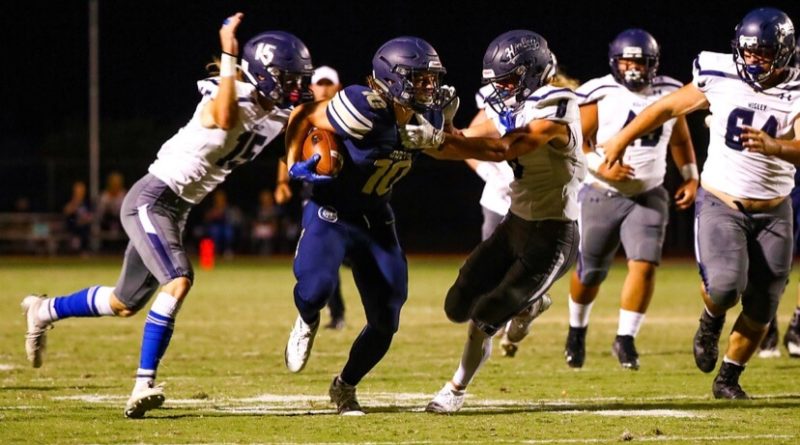 Over the next two weeks, we’ll be taking a position-by-position look at some of the top players in Arizona high school football. Our fourth list focuses on the tight ends.

There are hundreds of standout football players in Arizona and these lists are not intended to be comprehensive. Let us know in the comments section which other tight ends are worthy of fans’ attention in 2020.

Digian, a second-team all-San Tan 5A selection last year for the Colts, leads tight ends in the state in receptions (40), receiving yards (480) and touchdowns (seven), providing an inside threat to balance UCLA-bound Isaiah Newcombe on the outside.

The four-star recruit was poised to shine as a freshman before a broken bone in his hand wrecked his season. He’s come back this fall healthy and ready to show why Arizona State had made him an offer, with 20 catches in four games (ranking behind only Casteel’s Dominic Digian among the state’s tight ends) for 232 yards and two touchdowns.

Swope has moved around the gridiron during his career, playing lineman in youth ball and moving to linebacker to start his career with the Wolves. When he realized he wouldn’t crack the starting lineup there, he shifted to the other side of the ball to play tight end and H-back, where he found a home that will take him to the University of San Diego next year. He has nine catches for 100 yards and a touchdown this season.

The Toros are 6-0, and the emergence of Boyd Bowers has played a major part. He leads the team with four touchdown catches, and his 19 receptions for 267 yards rank among the state leaders for tight ends in both categories.

Like his team, Schmitt entered the 2020 season with little fanfare, but he has made himself into one of the top players at his position in the state. After catching 24 balls a year ago, he has 19 catches for 334 yards and five touchdowns in six games, ranking among the state leaders for tight ends in all three categories.

The Cougars moved from 2A to 3A this year and have clinched a spot in the play-in round, with Herrera leading conference tight ends with 16 catches for 266 yards and four touchdowns.

A year ago at practice, Hoffmeyer caught passes on back-to-back plays, prompting teammate Abraham Flores to approach coach Steven Fritz and exclaim, “He’s like a cheat code!” Not much has changed this season in Hoffmeyer’s play despite the Raiders playing an abbreviated schedule that will leave them ineligible for the postseason. He ranks among state leaders at tight end in catches (16, fifth) and receiving yards (279, sixth).

Huskies coach Ty Wisdom put Klopfenstein on the varsity roster last fall in part to learn under Jay Rudolph, the all-state tight end who’s now at San Diego State. “I wanted Matt to see how Jay did things, and that really helped Matt out,” Wisdom said. Klopfenstein has eight catches for 92 yards in three games this year. “There really is no ceiling for him,” Wisdom said. “He has the tools to be a big-time player and continues to get better every game.”

Mannino-Faison, known by teammates as “Bubba,” has developed into a red zone scoring threat for the Eagles, with five of his 13 catches (210 yards) this season for touchdowns. Also an outstanding run blocker, he has received offers from Mary (N.D.) and Southwest Minnesota State.

Masunas was having a difficult time transitioning after transferring from Sabino over the winter when his family moved for work. Huskies coach Mike Zdebski said before the season that “he’s learning to be a more physical player,” and in their first four games, he was held to two catches. Was his performance in Week 6 against Highland — four catches for 43 yards — a sign he’s ready to break through?

Baum has made himself into a key cog in the Lobos’ passing attack, with his 12 catches second-most on the team and his 280 receiving yards fifth among tight ends statewide. He’s caught four touchdown passes.

Werner splits time between throwing passes and catching them for the Sabercats. He presents more of a run threat when he’s under center as he displays the shiftiness that makes him a potential D-1 tight end — he has offers from Air Force, Army and Hawaii, among others. A second-team all-Desert Sky 4A pick last fall, Werner has eight catches for 146 yards this season.

Jones has helped the Pumas make a successful transition from the Canyon Athletic Association to the AIA, ranking among the leaders for tight ends in receptions (13), yards (306) and touchdown catches (six). Sequoia Pathway, ranked No. 12 in 2A, is poised to make the play-in round after this week’s regular-season finales.