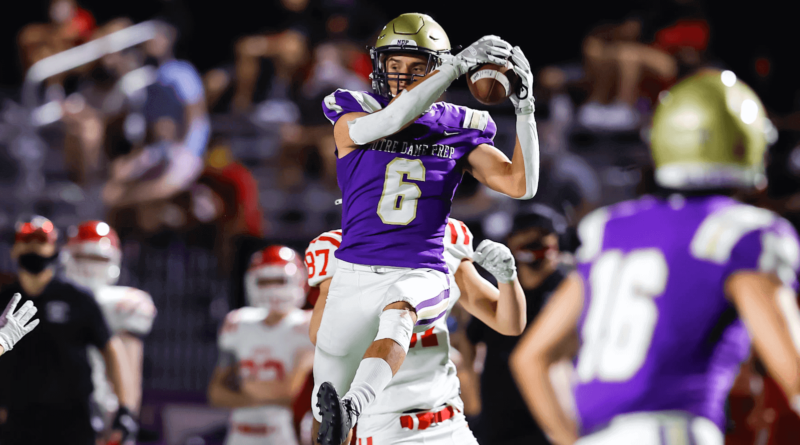 Over the next two weeks, we’ll be taking a position-by-position look at some of the top players in Arizona high school football. Our third list focuses on the wide receivers.

There are hundreds of standout football players in Arizona and these lists are not intended to be comprehensive. Let us know in the comments section which other receivers are worthy of fans’ attention in 2020.

Morris, who holds an offer from New Mexico, might be one of the top two-way talents in the state. An all-conference linebacker for the 4A state champion Wildcats last year, he’s also become one of the conference’s top receivers working with quarterback Ty Thompson, an Oregon commit. Morris was a solid third option in the passing game last season, catching 49 passes for 759 yards, but he’s emerged as a top threat this fall with 33 catches for 604 yards and eight touchdowns.

Patterson was a second-team all-conference pick last season, when the Scorpions reached the 4A final. They’re in the hunt for an Open Division playoff spot this fall after moving up to 5A, and the Montana State commit leads the conference in receptions (30) and receiving yards (580). He has six touchdown catches.

The Shamrocks’ high-powered attack is a family affair, with coach Rhett Stallworth’s son Richard leading the state in passing and his nephew, Rush, leading 3A with 29 catches for 582 yards and a conference-high 11 touchdowns. “Austin is a very quiet guy,” Rhett Stallworth said. “He doesn’t really stick out from a personality standpoint, but he is a lead-by-example person. He just shows up and plays.”

Nelson is a fantastic student, sporting a 4.3 GPA, and he’s proving himself to be a fantastic receiver in his first varsity season, ranking among the 6A leaders in receptions (41) and receiving yards (479) with four touchdown catches.

Shough’s older brother, Tyler, earned the starting quarterback job at Oregon this fall. Brady recently committed to Northern Arizona. He is focusing on offense this season for the Huskies and has 11 catches through five games, but he could move to safety when he arrives in Flagstaff.

Heywood was one of Kai Millner’s favorite targets last year, and the connection hasn’t waned in 2020. He has more catches (41) than last season in half the games and ranks second in 6A in receptions and receiving yards (555). “Branson is fast and has great hands,” Knights coach Eddy Zubey said. “He is able to separate from defenders with his speed and route running.”

Dyson has come a long way since his freshman year, when Arizona College Prep debuted its football program and he turned out for the sport for the first time, getting forced into the starting lineup and taking his lumps. This year, he leads 3A with 618 receiving yards, his 28 catches are second to Yuma Catholic’s Austin Rush’s 29, and he’s received nine college offers, with NAIA Rocky Mountain College in Billings, Mont., the early favorite. “It’s a testament to his commitment to the program,” coach Myron Blueford said.

Monsoon coach Josh Sekoch has had a front-row seat to DeLay’s career development. DeLay grew up across the street from Sekoch in Surprise and served as a team ball boy from the fourth grade until he entered the program as a freshman. He started his senior season as an all-region quarterback, but after injuring his throwing arm in Week 5, Sekoch moved him to receiver, giving him a head start on what Sekoch believes will be his position in college. “His athleticism and ability to do multiple things helps that,” Sekoch said.

Berger was a second-team all-Premier 6A selection last season. He leads the Pumas with 22 catches for 254 yards and two touchdowns this year. “He has great speed and hands and runs good routes,” Perry coach Preston Jones said.

Garcia, a first-team all-Black Canyon 4A selection a year ago, ranks among the state leaders in receiving yards (751, second) and receptions (39, sixth) regardless of classification as the Pioneers aim to return to the state playoffs after a one-year absence.

Anaya played primarily in the slot last season for the Huskies, making 22 catches, but he’s become a primary target for Nicco Marchiol this fall, leading the team with 27 receptions for 221 yards and three touchdowns.

Watson was an all-conference first-team pick on both sides of the ball for the Sultans last year. He’s picked up where he left off this season, leading 1A with 40 catches for 640 yards and 13 touchdowns entering a state quarterfinal matchup this week with Tempe Prep.

Owens was an all-Northeast Valley 5A selection as a junior and was well on his way to another big season before tearing his ACL in Week 3 against Campo Verde. He has committed to FCS North Dakota.

Singer transferred from Tartan in Oakdale, Minn., where he was an All-Metro second-team selection by the Minneapolis Star Tribune. He leads the Pioneers with 30 catches for 457 yards and six touchdowns, and he recently picked up an offer from Utah to go with previous offers from Air Force and Iowa State.

Lira was a two-way all-Metro 5A selection at Central last season. He transferred to Mesquite, the school down the street from where his father lives, when it was unsure whether the Phoenix Union district schools would play football this fall. He’s concentrated on receiver with the Wildcats and focused on developing a relationship with Oregon quarterback commit Ty Thompson, and it’s safe to say they’ve connected — Lira leads the state with 757 receiving yards, averaging nearly 24 yards per catch. He has 32 catches, 12 for touchdowns, in six games. “Eric is a hard-working young man,” Mesquite coach Scott Hare said. “He’s easy to work with and wants to be more successful each week.”

Escobedo was a first-team all-conference selection for the Vandals last fall, and he should make it two in a row this season. He leads 2A in receiving yards with 618 on 29 receptions, including nine for touchdowns.

With teammate and all-region receiver Damien Owens sidelined with an ACL injury, Smith has become the main outside threat for the Saints, building upon a sophomore season in which he earned second-team all-Northeast Valley 5A honors. Smith ranks among conference leaders in catches (26, second) and receiving yards (338, fifth), and he’s caught four touchdowns.

Newcombe was an all-conference receiver in 5A last fall, and the UCLA commit hasn’t missed a beat with the Colts’ move to 6A this year. He leads the conference in receiving yards with 671 and the state with 53 catches.

The Boise State commit was a second-team all-region selection for last year’s Open Division champions. He suffered an injury in the season opener against Liberty this year, missed the Wolves’ Week 2 game against Pinnacle, and as coach Rick Garretson noted, “he’s still getting his feet back on the ground.” Richmond has 13 catches for 224 yards and two touchdowns in four games.

Bellino underwent a bit of a growth spurt in the offseason, adding an inch and 20 pounds to his frame, and he’s exceeded his 2019 totals with a team-high 24 catches for 438 yards and seven touchdowns for the Eagles. He ranks fourth in 3A in receptions and yards.

Sutton made the all-East Valley 6A team as a kick returner last season, but he’ll deserve serious consideration to make it as a receiver this fall. He ranks among the conference leaders in receptions and yards, with 37 catches for 497 yards and five touchdowns through six games.

Grayes committed to Arizona over the summer after a sophomore season in which he caught a team-high 48 passes. He’s since drawn interest from Ohio State and Oregon. In the Wolves’ balanced passing attack, he is just off the team lead with 19 catches for 383 yards and seven touchdowns. “He’s just a great kid to coach,” Chandler coach Rick Garretson said. “He likes being coached hard. He embraces constructive criticism.”

Mizysak is a two-way standout for the Griffins, who are on the verge of making the 2A playoffs for the first time in the past five years. He ranks among the state leaders in all three receiving categories with 37 catches for 599 yards and 10 touchdowns. “I don’t think he has missed a play on offense, defense or special teams all year,” coach Robert Addicott said. “That says a lot, because he still makes plays in the fourth quarter on offense or defense.”

An injury cut short Minor’s 2019 season after eight weeks, and after the Firebirds sat out three weeks because of COVID-19, he’s made up for lost time in a big way. He leads 6A in yards per game (127.7), with 23 catches for 383 yards and two touchdowns in three games.

Adams entered camp listed at running back, but with the Wolves’ backfield stacked with talent, the state 100-meter champion as a freshman has moved to receiver, where he’s caught a team-high 20 passes for 182 yards. “He strikes fear in defenses with his speed,” Chandler coach Rick Garretson said.

Johnson has picked up the slack after the Toros lost lightning-quick receiver Nico Remus during their season opener. He’s surpassed his totals from last season, ranking among the conference leaders with 35 catches (sixth) for 534 yards (third) and three touchdowns.

Bears coach Chris McDonald thought Pennington had the potential to become one of the region’s top receivers after he saw only spot duty as a junior, and Pennington hasn’t disappointed. He leads the team with 19 catches for 318 yards and five touchdowns.

Robinson has developed into a reliable second option beside Branson Heywood in the Knights’ high-powered passing attack. His 33 catches (for 398 yards) rank eighth in 6A, and he’s among the conference leaders in touchdown receptions with seven.

Sutton was a second-team all-Southwest 6A selection for the Stallions as a junior. He leads the conference with nine touchdown catches this season. He ranks among the conference leaders in receptions (31, ninth) and receiving yards (521, fourth).