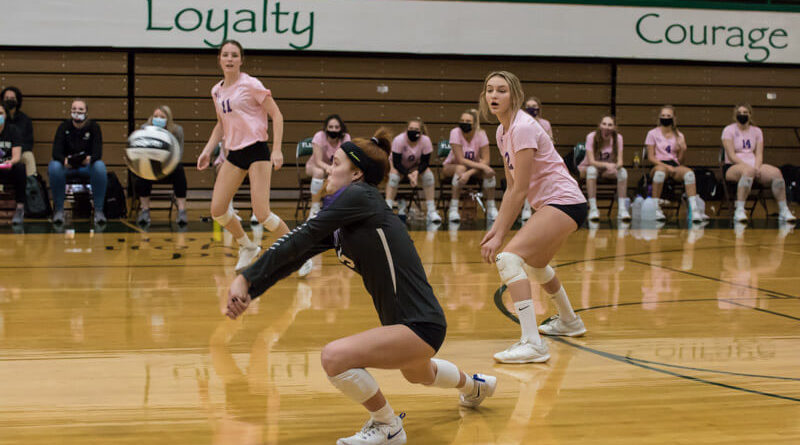 This week, we’re taking a position-by-position look at some of the top players in Arizona high school volleyball. Our first list focuses on the liberos and defensive specialists.

There are hundreds of standout volleyball players in Arizona and these lists are not intended to be comprehensive. Use the comments section to discuss the other liberos/defensive specialists who have starred in 2020.

Reardon has started for the Chiefs since Day 1 as a freshman, earning Skyline 4A defensive player of the year honors last fall and ranking among 4A conference leaders this season with 177 digs (3.9 per set) and serving 97 percent with 32 aces. Her goal is to attend the Naval Academy and play for the Mids — perhaps with twin sister Emma, an outside hitter. “Abby has a very high volleyball IQ and great court awareness,” Thunderbird coach Carly Whitehead said. “She goes out for every ball, hitting the floor and making diving saves. She holds herself to a high standard and constantly pursues greatness.”

Hanson was a first-team all-Desert Sky 4A selection as a sophomore, and with the Titans’ move to 5A this year, she has ranked among the conference’s top 10 liberos in digs all season, finishing the regular season with 178 (four per set) and serving just over 91 percent with 24 aces.

DeVitis made the all-Kino 4A first team last fall and helped the Lancers qualify for the state tournament as part of a 1-2 defensive duo with junior Jalynn Ransom. DeVitis led the team with 112 digs (2.7 per set) and served 91.7 percent with 18 aces.

Last year’s 1A conference defensive player of the year for the state champion Tigers maintains a family hold on the program’s libero position — her sister Brenna was a four-year starter from 2013-16 who also earned all-conference honors and played on two state championship teams. This fall, Brylee leads the conference and ranks third among Arizona players with 351 digs (7.8 per set).

Semro took over for all-Central 2A libero Megan Manley this season and leads the conference in digs (No. 4 in the state) with 327 (5.6 per set) while serving 92 percent with 26 aces.

Montez moved from defensive specialist to full-time libero this fall and has thrived in her new role. She ranks third among 5A players with 292 digs (5.8 per set) and is serving 90.2 percent with 28 aces to help the Vipers qualify for the state tournament play-in round.

Schuch played through a partial ACL tear as a junior and was a second-team all-4A conference selection for the Skyhawks, helping them reach the semifinals. The San Diego State commit, fourth among 4A liberos with 237 digs (4.8 per set), has played the position since taking up the sport at age 7.

An all-Valley 2A second-team selection a year ago, Bronson has helped the Titans achieve a top-eight ranking and an automatic berth in the state bracket, leading the team with 192 digs (3.7 per set) and serving just under 90 percent with 32 aces.

Lopez has had a breakthrough senior season for the Eagles, ranking No. 2 in 5A and No. 9 statewide in digs with 300 (5.4 per set) and serving 95.8 percent with 34 aces. Ironwood coach Lisa Lopez said Cristina Lopez is “extremely shy but is a big presence on the court, putting up big numbers.”

Young has ranked among the top 4A liberos in digs all season, currently sitting fifth with 209 (five per set) to help the Demons earn an automatic berth in the state tournament. She also is a 97.3 percent server with 18 aces. A 4.6 student in the top 4 percent of her graduating class, she’s choosing between two colleges. “Sarah is one of the most competitive players I have ever coached,” said Greenway coach Sarah Peterson. “She refuses to lose in any team competition whether on or off the court during team activities. Her competitive drive pushes the entire team to always work hard and do their best.”

A second-team all-San Tan 5A selection a year ago and a team captain this fall, Welsh averaged 2.8 digs per set and had helped put the Coyotes in contention for another state berth when their season ended prematurely because of a COVID-19 quarantine.

The second-team all-Southern 5A selection as a junior has had a big senior season to help the Tigers earn an automatic spot in the state tournament, making 239 digs (4.8 per set) — fifth among 5A liberos — and serving 21 aces.

Cordova was a first-team all-Desert Southwest 6A selection for the region champions last year. She ranked among the top 10 liberos in the conference this season in digs (208, 8.3 per set) and serving (97.1 percent, 28 aces). The Raiders were ineligible for postseason play this fall.

A second-team all-conference selection last year for the 6A state champions, Carrington averaged nearly seven digs per set this fall before her season came to an end when she had to go into COVID-19 quarantine just before the Bears opened their title defense in the play-in round. Carrington has committed to playing beach volleyball at Long Beach State — she teamed with Sam Drewry to reach the 2019 Division I state pairs championship match.

Wray was the 5A defensive player of the year last season and has 188 digs (4.7 per set) this year to help the Mustangs earn an automatic berth in the state playoffs. She has wanted to play for the University of Arizona since attending their camps as a newbie player, but when she felt the interest wasn’t reciprocated the summer before her junior year, she didn’t sign up. Right before camp started, a Wildcats coach called to invite her to attend, and the next day, they offered her a scholarship. “This was a huge eye-opener for her,” Sunrise Mountain coach Brandi Jans said. “She learned to never give up or second-guess yourself. She showed motivation and drive throughout the whole process and is now going to be living her childhood dream.”

Cannon, who received all-region honorable mention last fall, has ranked among the state leaders in digs this year, finishing the regular season No. 6 overall with 312 (7.4 per set).

The Thunderbirds won’t make the playoffs this year, but that doesn’t diminish the season Jimenez had. She led the state with 384 digs (six per set) during the regular season and served 93.2 percent with 41 aces.

Woods was a second-team all-Central 6A pick as a junior who finished fifth among conference liberos this fall with 213 digs (6.5 per set). The Pride were the unlucky 25th team in the 6A rankings, narrowly missing a state play-in berth.

Checani will continue her career in college playing beach volleyball at Grand Canyon, but with her junior beach season canceled because of COVID-19, she committed herself to a strong final indoor campaign. She enters the postseason 10th in Arizona and second in 6A with 299 digs (5.8 per set) while serving 92.5 percent with 23 aces. “She’s always leaving sand in our gym because she comes to our three-hour practice straight from a two-hour beach practice,” Hawks coach Jordan Neal said. “Kamilah is a workhorse. This week, we had a playoff bye. We took a couple days off, so she went straight to the beach courts to play.”

Robertson took over for second-team all-Premier 6A libero Abigail Converse this fall, and she led the conference in digs with 317 (six per set) — fourth among Arizona liberos.

Schoenhardt earned second-team all-San Tan 5A honors as a freshman and suffered no sophomore slump, ranking among conference leaders with 172 digs (3.8 per set) and serving 95.6 percent with 23 aces.

Lynne was a second-team all-Metro 2A selection last year while helping the Eagles win a third consecutive state championship.

A first-team all-Sonoran 5A selection last season, Barberii (3.4 digs per set) and classmate defensive specialist Jaedyn Azares (3.6 digs per set) helped the Nighthawks go undefeated in the regular season and earn an automatic berth in the state tournament.

Richtmyer received all-Desert West 5A honorable mention as a freshman and played a big role in the Wildcats grabbing the final play-in berth this fall, ranking among the conference digs leaders all season and currently sitting sixth with 219 (3.9 per set). She also leads the conference in aces with 56, serving 97.7 percent.

Huish was a second-team all-East Valley 6A selection a year ago and has helped the Toros earn an automatic berth in the state tournament this fall.

Douglas battled through severe concussions in her freshman and sophomore seasons to become a key cog in the Saints’ undefeated 2020 regular season. The San Diego State commit earned second-team all-Northeast Valley 5A honors last year and now ranks 10th among 4A liberos with 172 digs (four per set). “McKenna still plays with no fear,” coach Holly McLean said. “She loves the game and loves to compete.”

Martinez earned all-Desert Sky 4A first-team honors last year and has ranked among the conference leaders in digs this fall. She sits third among 4A liberos with 264 digs (5.7 per set) while serving almost 90 percent and sharing the team lead with 32 aces.

Thomas recently committed to Grand Canyon University after a strong club season before the pandemic, and she followed with a strong junior campaign during which she ranked among the 6A digs leaders all fall. She had 162 digs (3.4 per set) and served at a 95.1 percent clip with 21 aces.