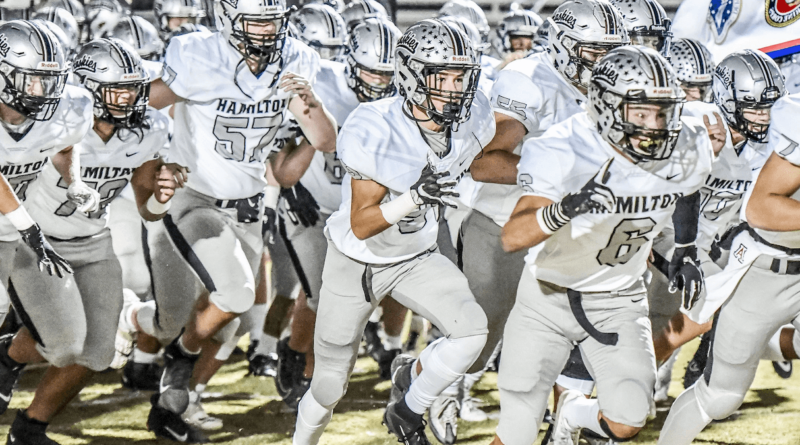 Chandler beat No. 4 Centennial 31-7. The Wolves led 13-7 at halftime, but an 18-point third quarter made it a blowout. Nicolas Nesbitt scored three touchdowns for Chandler.

Saguaro beat No. 8 Casteel 48-20. The Sabercats dominated a game that was scheduled on short notice because of COVID-19.

Centennial lost to No. 1 Chandler 31-7. The Coyotes trailed 13-7 at halftime, but they were shut out in the second half. Despite the loss, Centennial moves up this week because of an impressive first-half performance against one of the country’s top teams.

Queen Creek beat No. 10 Highland 24-14. The Bulldogs put the game away with a key fourth-down conversion.

Casteel lost to No. 3 Saguaro 48-20. The Colts’ two losses have come against No. 7 Williams Field and Saguaro. They move up to No. 8 this week because of previous wins over No. 13 Boulder Creek, Higley and No. 6 Queen Creek.

Highland lost to No. 6 Queen Creek 24-14. Max Davis scored a late touchdown to get Highland within 10 points, but that was as close as the Hawks would get.

Chaparral lost to No. 5 Liberty 53-27. The Firebirds’ first two possessions ended with a three-and-out and an interception. Chaparral trailed 39-14.

Ironwood beat No. 16 Sunrise Mountain 20-11 to make this week’s Top 20. Senior quarterback William Haskell threw for 303 yards and three touchdowns in the win.

Sunrise Mountain lost to No. 15 Ironwood 20-11. The Mustangs’ two quarterbacks combined for zero touchdown passes and an interception two weeks after beating No. 5 Liberty 37-33.

The state’s top 4A team debuts this week after five blowout wins in a row. Zion Burns is one of the best players in the state. The two-way standout is committed to Nevada.

Dropped out: Campo Verde and Higley

Moved in: Ironwood and Poston Butte