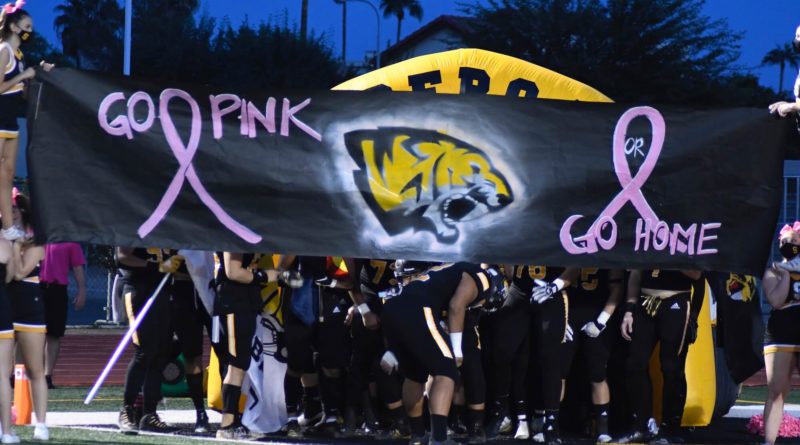 We’ve passed the halfway point of the regular season in Arizona high school football, and this week we’ll be examining where things stand in each of the state’s six conferences — including the top storylines, surprises, championship contenders and individual awards candidates. Here’s our capsule look at the 5A conference.

Just like in 6A, when you get past the top two or three teams, you see inconsistency among several of the title contenders. Just last week, we saw Ironwood — which got blasted by Desert Edge in Week 4 — hand Sunrise Mountain its first loss of the season.

A week ago, Horizon defeated Gilbert with five starters and half its team sidelined by COVID-19; the Huskies then had most of the rest of the team sent into quarantine, forcing them to cancel games with Saguaro and Maricopa. This follows another potential Open Division contender — Salpointe Catholic — having to miss two weeks in quarantine.

There are nine unbeaten or one-loss teams in 5A and four 3-2 teams. With 18 conference teams opting out of the AIA season to participate in alternative seasons, those 13 teams with two or fewer losses likely will be fighting for the eight 5A playoff berths and perhaps up to three Open slots that 5A schools could grab. With usual powers Centennial and Williams Field now in 6A, this year could be as wide-open as the 5A conference has been in some time.

Desert Mountain matched its win total from each of the past two seasons when it opened 3-0. The Wolves were then forced into quarantine after a player for their Week 3 opponent, Barry Goldwater, tested positive. They’ll emerge from quarantine this week and run a gauntlet of fellow unbeatens Sunnyslope, Cactus Shadows and Salpointe Catholic as they hope to qualify for the playoffs for the first time since 2017. They last won a playoff game in 2012.

Congratulations to Canyon View, which never could have imagined having to make its debut as a varsity program under such interesting circumstances. The Jaguars have two wins, more than eight established 5A programs. They close the season with three consecutive road games, but with two very winnable ones, they could finish .500 in their inaugural season.

Which 5A teams will make the Open Division cut?

Barring something wonky in the algorithm, Saguaro should be among the top eight — if not the top four — when the first Open Division rankings come out Tuesday.

Desert Edge, at 5-0 after a win at Mesa on Friday, also could be among the top eight. The Scorpions’ game next week at Sunrise Mountain will be critical for both teams’ chances.

Salpointe Catholic might not be in the first rankings because it missed two weeks in COVID-19 quarantine, but the Lancers’ victory over Campo Verde definitely keeps them in the mix with three weeks to go.

Like in 6A, some of this depends on the rankings when they’re released Tuesday and who joins Saguaro among the potential eight Open Division qualifiers.

Desert Edge and Salpointe Catholic would be instant favorites if they don’t make the Open. Take them out of the mix, and 2019 runner-up Campo Verde, 2019 Open quarterfinalist Horizon, Sunrise Mountain and Ironwood make up the top tier of contenders.

Also, don’t count out Notre Dame Prep, which snapped a two-game skid with a 47-0 rout of Maricopa. The Saints reached the semifinals last year and the final in 2017 and 2018.

Offensive player of the year candidates

Calloway followed a breakthrough junior campaign by going over 100 yards in each of his first four games — including a 201-yard performance in a win over Notre Dame Prep — before Salpointe Catholic held him to 56 yards Friday night. He’s still No. 2 among 5A backs with 611 yards (5.7 per carry) and five touchdowns.

The San Diego State commit sits just behind Adryan Lara among 5A leaders with 1,083 yards (66 completion percentage) and 13 touchdowns, and he’s rushed for six TDs. He bounced back from a dismal performance in a Week 4 loss to Desert Edge by spearheading the Eagles’ win against Sunrise Mountain, throwing for a season-high 303 yards and three touchdowns.

Just a junior and already committed to Washington State, Lara has thrown for a 5A-best 1,094 yards and 11 touchdowns in leading the Scorpions to a 5-0 start. The only question might be whether his classmate, Jeryll McIntosh (775 rushing yards, eight TDs), will split votes among Desert Edge stars.

Werner doesn’t have the flashiest numbers as the versatile senior splits time between quarterback and tight end. He has thrown for 282 yards and three touchdowns, going 14 of 23 (60.9%) while sharing time with Ridge Docekal. He has rushed for a team-high 222 yards and six TDs and caught eight passes for 146 yards.

Defensive player of the year candidates

The run-stuffing inside linebacker has keyed a Scorpions defense that has posted two shutouts and allowed nine points per game. He leads the team with 50 tackles, reaching double digits in three of his first five games.

The three-star junior has outshone teammates such as Michigan-bound Quintin Somerville (nine tackles for loss) and Carlos Griffin (four interceptions) in the early going, leading the Sabercats with 29 tackles (13 for loss), seven hurries and two sacks.

The Mustangs senior holds the 5A lead with seven sacks among his 12 tackles for loss and 32 overall through five games.

A bright spot in the Tigers’ 1-4 start, the senior leads 5A with 73 tackles, including four games with 14 or more. He plays both ways for Gilbert, starting two games at quarterback before moving to receiver in Friday’s last-minute loss to Mesquite.

Coach of the year candidates

The Scorpions haven’t missed a beat in their move up from 4A, starting the season 5-0, including a big Week 4 victory over Ironwood. This week’s matchup with Sunrise Mountain should decide the region title.

The Mustangs have knocked off last year’s 4A state champion (Mesquite) and 6A champion (Liberty) and, last week’s hiccup against Ironwood aside, have a good shot at joining those two as first-time state champions.

The first-year head coach had to deal with a pandemic that derailed his first offseason with the Lancers, then a two-week COVID-19 quarantine after an outbreak at the school. His team has won twice since returning, beating 2019 5A runner-up Campo Verde last week.