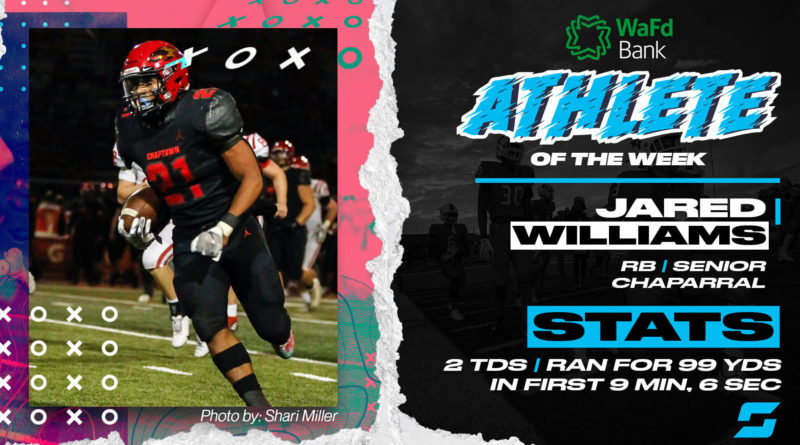 Congratulations to Chaparral running back Jared Williams for being voted SBLive’s WaFd Bank Arizona High School Athlete of the Week!

Chaparral put away Brophy Prep in the first half, thanks largely to Williams’ two first-half rushing touchdowns. Williams ran for 99 yards in the first 9 minutes, 6 seconds, of the Firebirds’ 35-0 victory.

We are currently accepting WaFd Bank Athlete of the Week nominations for the week of Oct. 26-Nov. 1. If you would like to nominate an athlete, please email regan@scorebooklive.com or tag us on Twitter or Instagram at @sbliveaz.

Richard Stallworth, Yuma Catholic QB: The top stat line of the night goes to Stallworth, who led the Shamrocks to a 54-21 victory over Dysart with more than 550 total yards and seven touchdowns.

Rashon Adams, Centennial WR/DB: Adams propelled Centennial to a 31-21 comeback win over Pinnacle with three touchdown catches and an interception.

Eli Sanders, Chandler: Sanders ran for 142 yards and two touchdowns in a 63-7 win over Higley.

Elias Guerrero III, Apollo DL: Guerrero had 3 tackles for loss, 2 fumble recoveries, and 5 QB-hurries in a 31-6 victory over Maricopa.

PJ London, Blue Ridge QB/FS: London dominated the first half in a 42-37 victory over Arizona College Prep. He racked up two passing touchdowns and two rushing touchdowns on offense plus an interception on defense before halftime.

Max Davis, Highland RB: Davis had 5 TDs in the Hawks’ 42-9 victory against Perry.

Myles Taylor, Williams Field WR/FS: Taylor led a balanced attack for the Black Hawks in a 31-28 victory over Casteel. His performance at receiver included two touchdown catches, and he had a strong night defending in the secondary.

Cole Martin, Hamilton DB: Martin was the star for victorious Hamilton in a 13-7 defensive duel against Saguaro. In addition to excelling in the secondary, he had two punt returns – one for 75 yards – that led to scores for the Huskies.

Dylan Dreis, Salpointe Catholic QB: Coming in for an injured Treyson Bourget with a 14-0 lead, Dreis helped lead the Lancers to a 37-6 victory over Buena. He finished with 156 passing yards in less than three quarters and completed 13 of 21 passes.

Drew Boxwell, Horizon QB: More than half of Horizon’s squad was missing because of COVID-19 quarantining, but the Huskies were able to blow out Gilbert. Boxwell threw for 107 yards and a touchdown, and he ran for 169 yards and two scores.

Omar Muse, Horizon RB: Muse also did major damage on the ground, running for 164 yards and two touchdowns on 16 carries.

Logan Hubler, American Leadership Academy – Queen Creek QB: Hubler threw for three touchdowns and ran for two more in less than a full night of action in a 59-28 victory over Marcos de Niza.

Adryan Lara, Desert Edge QB: Lara threw for three touchdowns in guiding the Scorpions to a 41-7 victory over Ironwood.