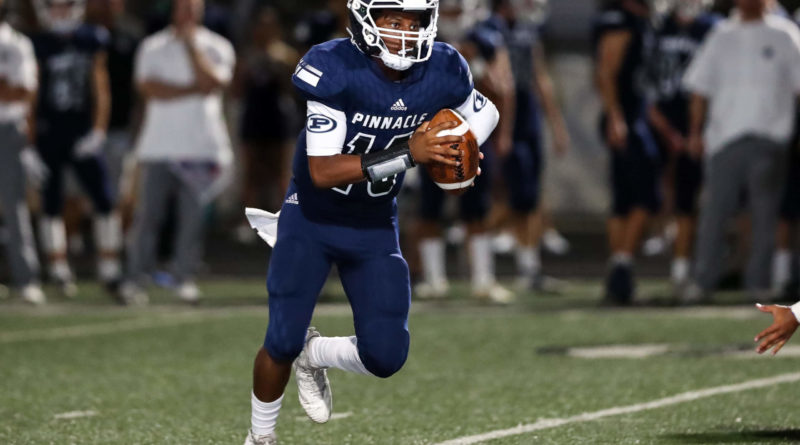 Based on statistics, playing time and observations, here are 20 of the top Arizona high school football players in the Class of 2023. Players from all over the state are represented, and the list is in alphabetical order.

SBLive’s Bodie DeSilva compiled this list. Do you have a question or want to recommend an addition? Email him at Bodie@ScorebookLive.com.

Buchanan had more than 1,100 all-purpose yards as a freshman to go with 12 rushing touchdowns. He’s started fast as a sophomore, averaging nearly 12 yards per carry.

Clark has averaged more than eight yards per carry this season despite serving as the backup running back. He’s received an offer from Nevada.

Cooper broke through as a freshman, scoring four touchdowns and averaging eight yards per carry. He’s improved his pass-catching skills with 15 receptions through four games.

Dampier impressed in limited time as a freshman and opened his sophomore campaign with a five-touchdown performance against Horizon.

At 6-4 and 250 pounds, the two-way lineman has the look of a top college recruit. His first offer came from New Mexico.

After catching 18 passes during his freshman season, English already has 10 catches for 171 yards and four touchdowns this year. Morgan State is his first offer.

Ennis receives limited carries in an extremely deep running back group for the Wolves, but he should break through over the next couple seasons.

Griffin grabbed three interceptions in Saguaro’s Week 2 win over Maricopa, returning two of them for touchdowns. His first offer arrived this month from Syracuse.

Kasper has the size at 6-5 and the NFL bloodlines that make him an exciting prospect. His father, Kevin, played in the NFL. Offers have come in from Iowa, Iowa State and Arizona State.

Klopfenstein has made an impact early in his second high school season, catching eight passes for 92 yards through three games.

Leopold is averaging more than six yards per carry this season and has racked up 45 tackles on defense.

Martin turned heads during his freshman season, recording 38 tackles, five pass breakups and an interception and returning punts and kicks for the Huskies. LSU, Oregon and USC are among his 19 scholarship offers.

Milkovic had 36 tackles and four sacks during his freshman season for Hamilton, earning him an offer from New Mexico.

Pule is a major part of a Hawks offense that is averaging 38 points per game during their 4-0 start.

Reynolds had 53 tackles and five sacks as a freshman and has two sacks and a forced fumble this year. Offers have come from Colorado and Washington State.

With only one season of football under his belt, Robinson has impressed with his 6-6 frame. The three-sport athlete picked up an offer from Arizona State before entering high school.

Griffin isn’t the only standout defensive back in Saguaro’s 2023 class — Shivers had 14 tackles and an interception during his freshman season, earning an offer from Florida State.

Stallworth has been on fire through four games. He has 12 touchdown passes over the past two weeks, including a seven-touchdown, zero-interception performance against Wickenburg in which he threw for 481 yards.

Stopke is closing in on 500 rushing yards this season after back-to-back 200-yard games. He has 10 tackles and a forced fumble on defense.