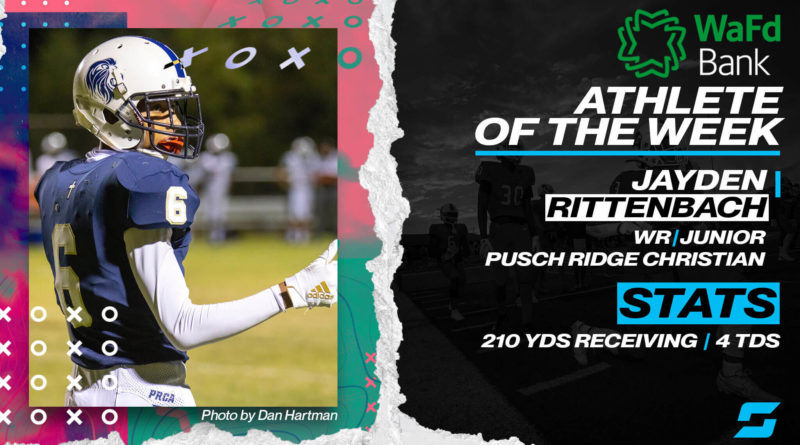 Rittenbach led the Lions to a 58-26 victory over Thatcher with four touchdowns and 210 yards receiving in just three quarters.

Rittenbach received 64.5% of the vote, beating out Basha RB/LB Caleb Jones, who finished with 28.79%. Highland RB Max Davis finished third with 5.61% and Valley Christian WR Andrew Hanzal was fourth with  0.35%.

We are currently accepting WaFd Bank Athlete of the Week nominations for the week of Oct. 19-25. If you would like to nominate an athlete, please email regan@scorebooklive.com or tag us on Twitter or Instagram at @sbliveaz.

Here are the other athletes who were nominated for Oct. 12-18:

Richard Stallworth, Yuma Catholic QB: The Shamrocks’ passing game was dominant in a 49-12 victory over Wickenburg. Stallworth led the charge with massive totals of 481 yards and seven touchdowns.

John Beltran, Cibola RB: Beltran was one of a few Raiders to go off in a 51-18 victory over Kofa. In the first half, he went for 97 yards and two touchdowns on the ground and 70 yards and a touchdown receiving.

Isaac Rios, Cibola RB: Rios picked up where Beltran left off — he added two rushing touchdowns and a receiving touchdown in the second half.

L.T. Morey, Morenci RB: Morey was unstoppable in a 39-14 victory over Bisbee, rushing for four touchdowns and a two-point conversion.

JJ Newcombe, Casteel DB: The freshman cornerback had two timely interceptions and three passes defensed to get Casteel over Queen Creek in a 12-7 defensive battle.

Andrew Hanzal, Valley Christian WR: Hanzal led the Trojans in receiving touchdowns with four. Austyn Gerard had the other three.

Carlos Griffin, Saguaro DB: Saguaro did essentially all of its damage in the first half of a 70-14 trouncing of Maricopa. Griffin helped the Sabercats control the game early with two interception-return touchdowns in less than a quarter and a half of play. He added a third interception later.

Caleb Jones, Basha RB/LB: Jones starred on both sides of the ball in a 38-24 victory over Desert Vista, finishing with three rushing touchdowns and an interception-return touchdown.

Kai Millner, Higley QB: Millner led the Knights to a 42-21 victory over Desert Ridge with five passing touchdowns and a receiving touchdown on a trick play.

Ty Thompson, Mesquite QB: The dynamic duo of Thompson and Eric Lira led Mesquite to 60 points in an 18-point victory over American Leadership Academy. Thompson had five touchdown passes and ran for two scores, going for hundreds upon hundreds of total yardage, including nearly 300 in the second quarter alone.

Angel Flores, Casa Grande QB: Flores was one of numerous Cougars to shine in a 56-point thrashing of Vista Grande. He went for three passing touchdowns and two rushing scores.

Tommy Arnold, Sunrise Mountain RB/LB: In arguably the game of the week, Arnold rushed for two touchdowns and recovered a fumble on defense to clinch a 37-33 victory over Liberty.

Jacob Cisneros, Boulder Creek RB: The Jaguars held on to win a 28-27 thriller over Brophy Prep behind the elite duo of running back Jacob Cisneros and quarterback Bear Milicek. Cisneros ran for two touchdowns and caught another from Milicek, who also had a rushing touchdown.

Max Davis, Highland RB: Davis produced perhaps the best stat line of the night in a resounding 47-13 win over Sandra Day O’Connor. He ran for 311 yards and five touchdowns on 22 attempts, good for more than 14 yards per carry. Davis received plenty of help from his offensive line, consisting of Bronson Barney, Cooper Stevens, Makua Pule, Noah Boone and Caleb Lomu.