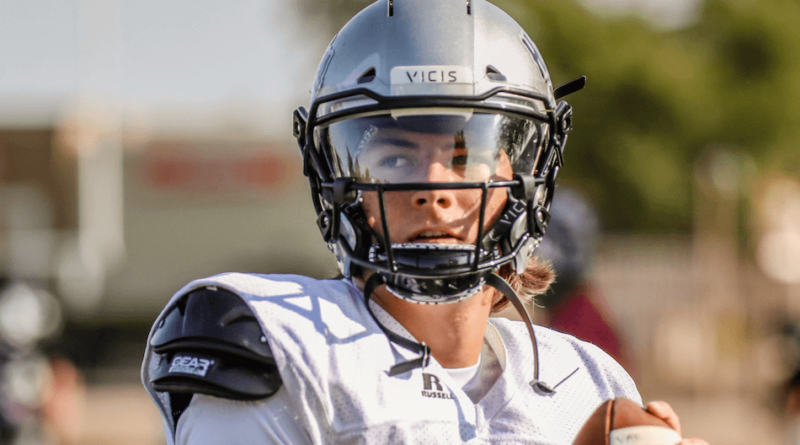 Based on statistics, playing time and observations, here are the top 20 Arizona high school football players in the Class of 2022. Players from all over the state are represented, and the list is in alphabetical order.

SBLive’s Bodie DeSilva compiled this list. Do you have a question or want to recommend an addition? Email him at Bodie@ScorebookLive.com.

One of the fastest sprinters in Arizona history, Adams has several scholarship offers after playing running back and receiver for the Wolves.

After sitting out because of a transfer, Bourguet had 13 touchdown passes in seven games as a sophomore. He’s committed to Arizona.

Brailsford was a bulldozer at right guard for the Sabercats last season. Arizona, Colorado and USC are among his offers.

Brown had 10 touchdown passes for the Bulldogs as a sophomore after gaining eligibility a few games into the season. He’s committed to USC.

Coleman caught 14 passes for 126 yards during his sophomore campaign. Arizona State, Nebraska and Utah are among his double-digit offer list.

Grayes was the Wolves’ leading receiver as a sophomore during their undefeated season, finishing with 48 catches and six touchdowns. He’s off to an incredible start this year with nine catches for 228 yards and six touchdowns through two games. He’s committed to Arizona.

Grubbs has totaled more than 1,200 rushing yards during his first two seasons while playing on both sides of the ball. He has offers from Arizona State and Northern Arizona.

Jamison ran for nearly 1,800 yards and had 31 touchdowns during his sophomore season at American Leadership Academy. He’ll play his junior season at Williams Field.

A versatile player for Saguaro, Jacobs had two interceptions and returned a punt for a touchdown last season. He had 136 all-purpose yards and an interception in the Sabercats’ 2020 season opener.

Lara is in his third season as the Scorpions’ starter. He has thrown for 68 touchdowns in 27 career games and made a commitment to Washington State last month.

Lucas had six sacks, a forced fumble and an interception during his sophomore season. He’s the top-rated recruit in Arizona’s 2022 class and has picked up 20 scholarship offers from schools across the country.

Lutu transferred to Saguaro after playing for Chandler the past two seasons. He was a dominant right tackle for the Sabercats last year. Offers have come in from New Mexico and Arizona State.

Marchiol transferred from Colorado after his sophomore season, when he had 27 touchdown passes. He’s thrown for three touchdowns through two games for Hamilton and lists LSU, Florida and Michigan among his top eight schools.

A two-way playmaker, Masunas caught 17 passes for 207 yards last season and added 36 tackles and six sacks on defense. He’ll play his junior season for Hamilton after transferring from Sabino.

Monday was a nightmare for opposing offenses last season, racking up 58 tackles and 11 sacks. Arizona, Baylor and Florida State are among his scholarship offers.

Morrison had 42 tackles and two interceptions during his sophomore season for the Broncos. Michigan and LSU are his two most recent scholarship offers.

An injury last season limited Swanson to four games and 15 tackles, but offers have come in from Auburn, Oklahoma, Oregon and several others.

Stovall was an all-state selection in Colorado last year before transferring during the offseason. Arizona, Arizona State and Michigan State are among his offers.