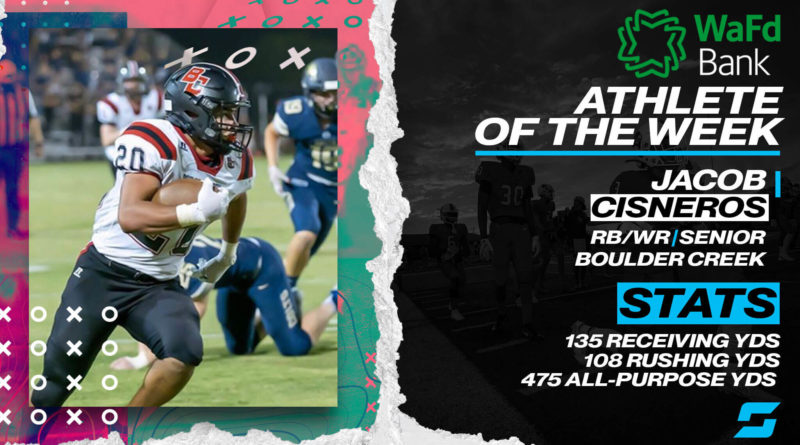 Congratulations to Boulder Creek RB/WR Jacob Cisneros for being voted the WaFd Bank Arizona High School Athlete of the Week!

Boulder Creek lost a heartbreaker in its season opener, but Cisneros had arguably the top stat line of anyone in Week 1 – 135 receiving yards, 108 rushing yards, and 475 all-purpose yards.

We are currently accepting WaFd Bank Athlete of the Week nominations for the week of Oct. 5-11. If you would like to nominate an athlete, please email regan@scorebooklive.com or tag us on Twitter or Instagram at @sbliveaz.

Here are the other athletes who were nominated for Sep. 28 – Oct. 4:

Gavin Smith, Notre Dame Prep WR/DB: Smith got it done on both sides for the Saints, reeling in two receiving touchdowns and two interceptions.

Steven Hoffman, Sunrise Mountain CB: Hoffman led the charge defensively in a 48-7 victory over Cactus. He went for two interceptions, one of which he returned 85 yards for a score.

Travis Ward, Sunrise Mountain QB: One of numerous Mustangs to star on offense, Ward finished with three passing touchdowns and a rushing touchdown in less than a full night of work.

Hunter Ogle, Santa Cruz Valley RB: Ogle rushed for three touchdowns in less than a full game in a 61-0 annihilation of San Tan Charter. He went for nearly 150 rushing yards in the first half.

Ben Roberts, McClintock WR/FS: Roberts propelled McClintock to a 36-6 win over Tempe on both sides. He finished with two receiving touchdowns and a rushing touchdown on offense, and 11 tackles on defense.

Gavin Lloyd, Poston Butte QB: Lloyd led the Broncos to 35 first-quarter points and a lopsided blowout victory of Thunderbird. He had two passing touchdowns and a rushing touchdown before 1.5 quarters had passed.

Devon Dampier, Pinnacle QB: The guy under center for all those touchdowns? Sophomore Devon Dampier, who finished with five passing TDs and two rushing TDs in well under a full night of work.

Adryan Lara, Desert Edge QB: Lara threw for five touchdowns in the first half alone in a 56-0 blowout of Canyon View.

Wyatt Zellner, Gilbert LB: One of two Tigers with 15 tackles, Zellner also went for three tackles for loss and a sack. Gilbert defeated Millennium in a 24-7 defensive battle.

Austin Grimm, Buena QB: Grimm got Buena off to the start it needed with three first-half touchdown passes in his first start. Buena held on to beat Combs 33-20.

Jacob Gunter, Coolidge QB: Gunter led Coolidge to a 47-43 comeback victory against Florence with four passing touchdowns and a rushing touchdown. He finished with 317 passing yards and completed 18 of 25 passes.

Christian Johnson, Greenway RB: In a lopsided beatdown against Moon Valley, Johnson erupted for 323 yards and four touchdowns on the ground.

Ashton Hill, Deer Valley RB/LB: Hill was everywhere in the Skyhawks’ victory. He rushed for 80 yards and two touchdowns, had three receptions for 17 yards, recorded seven tackles, forced a fumble, and had two fumble recoveries.

Ben Tobin, Scottsdale Christian Academy QB: Tobin had three touchdowns through the air and three on the ground in a 49-14 rout of Trivium Prep.