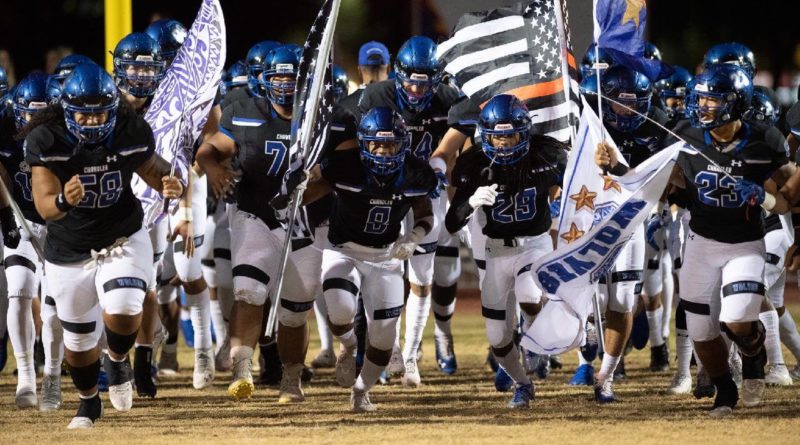 Plenty of pent-up energy and excitement erupted all across Arizona high school football fields Friday night as the delayed season finally kicked off.

At Liberty High School, two defending state champions took the field in front of a socially distanced group of fans as Open champion Chandler played the 6A champion Lions.

“There was definitely an, ‘Is this really happening?’ type of feeling,” Wolves coach Rick Garretson said. “We’d gone so long, first doing things without footballs, then not being able to compete against each other — the whole nine yards — since June.”

Many things had changed between December, when both teams won their state championships, and Friday night, but one thing remained the same — the dominance of the Chandler program.

The Wolves, No. 8 in the most recent SBLive Power 25 rankings, held Liberty to 230 yards of total offense, and senior quarterback Mikey Keene (Central Florida) connected with junior Kyion Grayes (Arizona) on four touchdown passes as they rolled to a 44-10 victory for their 27th consecutive win and 37th in a row against in-state competition.

“I was happy with that for Game 1,” Garretson said. “We have a really experienced football team, which was definitely an advantage for us during pandemic time.

“And, when you have kids like Kyion, (Jalen) Richmond, (Quaron) Adams, three high-profile receivers, (Eli) Slope at H-back, who are all vertical threats — when you have that type of firepower, they do a great job of balancing things out.”

After knocking off the defending 6A champion, the Wolves will take on fellow Elite 8 qualifier Pinnacle in their home opener this week. Chandler has won the previous four meetings, the last in the 2017 6A quarterfinals en route to the second of four consecutive state titles.

“We’re looking forward to playing them,” Garretson said. “We’re not going to have opponents this year that are going to be blowouts. We’ve got to be able to come out and party every week and earn everything we get.”