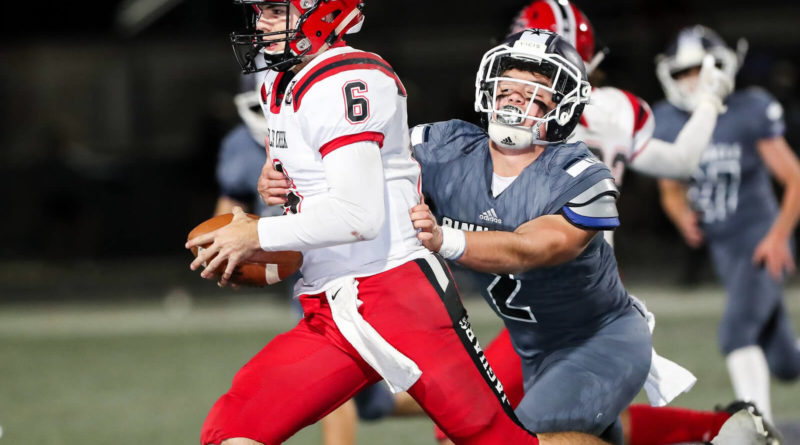 Now we want to hear from you: Who will prove himself as the best player in 6A Region 7? Cast your vote below and let us know who you think will be the Southwest player of the year in 2020.

LB Brandon Craddock, Sandra Day O’Connor. He’s coming off a monster sophomore season that earned him second-team all-region honors. He led the Eagles with 90 tackles (7½ for loss) and 3½ sacks.

QB Burton Delay IV, Valley Vista. Delay is a dual-threat quarterback who received all-region honorable mention last year, when he passed for 1,847 yards and 16 touchdowns and ran for 394 yards and five scores.

WR Deric English, Mountain Ridge. One of the highest-upside receivers in Arizona, he received a Division I offer from Morgan State after just one year of high school football. At 6-4, 210, he has the athleticism of a downfield receiver and the budding size of a tight end.

LB Deryk Leverage, Mountain Ridge. A returning all-region selection (honorable mention), he was second on the team last season with 81 tackles and seven tackles for loss, and he led the Mountain Lions with 3½ sacks. He can play either linebacker spot with strong edge-rushing ability, but he primarily plays outside linebacker because he also has impressive mobility.

DE Jaelin McCullen, Valley Vista. McCullen was a first-team all-region pick as a sophomore and is considered by many to have some of the highest upside among Arizona defensive linemen in the Class of 2022.

QB Bear Milacek, Boulder Creek. The three-star New Mexico commit is the top-ranked senior prospect in Region 7. The pro-style quarterback threw for 2,364 yards in 11 games last season, and he did some damage on the ground with 268 rushing yards.

DL Gabriel Monaco, Sandra Day O’Connor. Another returning force in the Eagles’ front seven, he comes off a second-team all-region campaign in which he totaled 38 tackles, nine tackles for loss and 4½ sacks.

DT/OL Jacob Moore, Boulder Creek. Another player who made first-team all-region last season on both sides of the ball, he might be the top two-way lineman in Region 7.

WR Zachary Sutton, Shadow Ridge. The Stallions didn’t throw the ball a bunch last season, but when they did, his 333 receiving yards and 20 receptions were team-high marks that were good enough to earn him second-team all-region honors.

DL/LB Derek Torres, Mountain Ridge. Torres can play at least three positions in the front seven and is coming off a second-team all-region campaign. Spending most of his time at defensive end, he totaled 33 tackles (four for loss) and three sacks last year, but those numbers don’t do justice to the attention he took up in opponents’ game plans.