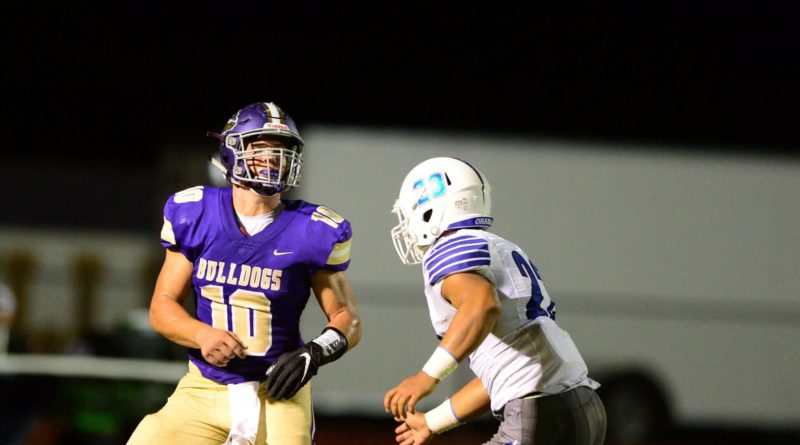 Now we want to hear from you: Who will prove himself as the best player in 6A Region 3? Cast your vote below and let us know who you think will be the Fiesta player of the year in 2020.

RB Payton Barlow, Queen Creek. Barlow has state-finalist sprinter speed in the 100 meters. Bulldogs coach Joe Germaine calls him “a home run hitter in the backfield.” He ran for 263 yards and three TDs in a backup role last year and made 47 tackles on defense.

WR/S Hunter Barth, Queen Creek. The Cal-Berkeley commit is a two-way standout for the Bulldogs, making 21 catches for 255 yards and two TDs at receiver and making 51 tackles and an interception in the secondary.

QB Devin Brown, Queen Creek. Bulldogs coach Joe Germaine thinks very highly of Brown: “Devin has one of the most live arms that I’ve seen for a 2022 QB. He also has a unique ability to extend plays inside and outside of the pocket.” Last season, the USC commit completed 100 of 221 passes for 1,319 yards and 10 touchdowns.

RB Kaden Cloud, Williams Field. Cloud has an offer from Oregon State. As a sophomore, he had 117 carries for 1,277 yards and 16 touchdowns. He caught eight passes for 100 yards and a score.

S Krew Jackson, Queen Creek. Even though he’s a safety, Jackson has the physicality of a linebacker. The Kansas State commit had 72 tackles, two interceptions and a fumble recovery last season.

RB Aziya Jamison, Williams Field. Jamison transferred from American Leadership Academy-Queen Creek, where he led the Patriots to the 3A state title last year, running for 1,761 yards (9.8 per carry) and 26 touchdowns and catching 21 passes for 372 yards and five scores. His combination of power and speed has drawn offers from Arizona State and BYU.

OT Saia Mapakaitolo, Red Mountain. Mapakaitolo returns to his Arizona roots after playing for Alemany in Mission Hills, Calif., last season. His length, footwork and athleticism translate from his rugby background to his work at left tackle.

WR Isaiah Newcombe, Casteel. Newcombe is committed to UCLA. He made 48 catches for 661 yards and seven touchdowns last season.

LB Trey Reynolds, Queen Creek. In addition to playing quarterback, Reynolds went for 159 tackles and four forced fumbles at linebacker last season. Bulldogs coach Joe Germaine: “Trey is the best athlete on our team. He brings an unbelievable blend of speed and strength to the linebacker position.” He’s committed to Utah.

LB Carson Speer, Williams Field. While he’s undersized for a linebacker, Speer is coming off one of the most statistically impressive 2019 campaigns of any returning defensive player: 146 tackles, 14 tackles for loss, four sacks, three interceptions, three fumble recoveries, one blocked punt and two blocked field goals.

WR Myles Taylor, Williams Field. Taylor is a flat-out winner, according to his coach, Steve Campbell. Last year, Taylor made 60 catches for 1,342 yards and 16 touchdowns.