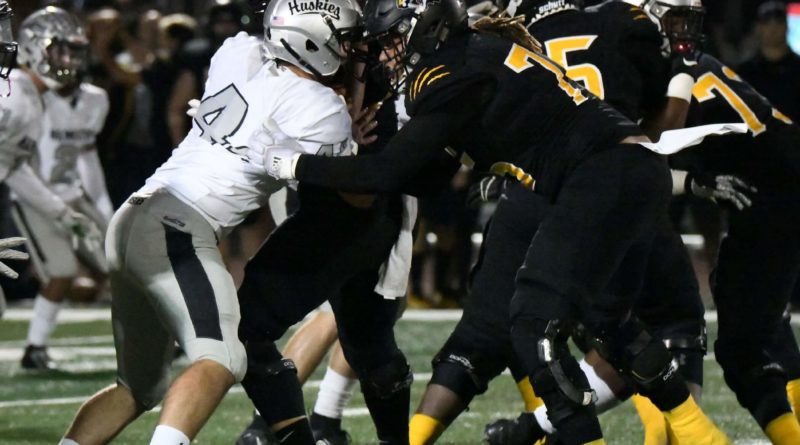 SBLive Arizona will preview several of the top football teams in the state leading up to the 2020 high school football season. Here’s our look at the Saguaro Sabercats of 5A Region 1 (East).

Docekal served as the primary backup to first-team all-conference honoree Tyler Beverett last season. The pro-style quarterback, No. 23 on the 247Sports list of junior recruits in the state, played in seven games in 2019, completing 18 of 22 passes (81.8 percent) for 214 yards and two touchdowns.

Werner, a second-team all-region selection a year ago, offers the Sabercats a wealth of talent at the quarterback position. He also plays tight end, where he caught 12 passes (four touchdowns) as a junior. He holds offers from Air Force, Army, Texas State and Hawaii.

Somerville was a first-team all-conference pick on defense last season, when he finished with 68 tackles, including 29 for loss and 7½ sacks. The all-Arizona candidate, the No. 4 recruit in the state according to 247Sports, recently committed to Michigan.

Ma’afu shifts between end and tackle. Like Somerville, he earned first-team all-conference honors in 2019 after finishing with 53 tackles (23 for loss, three sacks). The Northern Arizona commit is an elite rugby player who has participated in several national tournaments.

The first-team all-conference selection and another all-Arizona candidate will take his talents to the Pacific Northwest next year. Walden, the state’s No. 2-ranked recruit, committed to Oregon in May.

Brailsford is a first-team all-region pick — No. 9 among junior recruits — who can squat 500 pounds. He has offers from USC, New Mexico and Colorado, among others.

Burke, the state’s No. 3 recruit who committed to Ohio State in the summer, only scratched the surface of his talent last season, when he made 12 catches (albeit for a team-high 26.1-yard average and four touchdowns) and two interceptions and received all-region honorable mention. With four-star recruit Shawn Miller transferring to the IMG Academy in Florida, Burke becomes the primary outside target for whoever wins the quarterback job.

Another FBS recruit, Dalton committed to San Diego State after receiving all-region honorable mention as a junior, when he made 60 tackles (20 for loss, 5½ sacks, nine hurries).

Monday was a beast on Friday nights for the Sabercats last season, finishing with a team-high 11 sacks among his 58 tackles (26 for loss), yet earning no postseason recognition after playing behind all-Arizona linebacker Damian Sellers (now at UCLA) and all-conference first-teamer McCade Siegel. Monday, No. 7 on the 247Sports junior list, has offers from New Mexico and Iowa State.

Lutu, No. 14 on the 247Sports junior list, transferred from Chandler and will miss the first four games.

Yet another member of the Sabercats’ loaded junior class, Jacobs sits No. 13 on the 247Sports junior list, with offers from Arizona State and New Mexico. Jacobs, who had 29 tackles, two interceptions and three pass breakups last year, also will receive time at running back and slot receiver.

Thomas last year earned first-team all-region honors at defensive back for Desert Vista with 80 tackles (54 solo), three interceptions, seven pass breakups and three forced fumbles. He might have to sit out the first half of the season, but by the time the Sabercats are ready for their inevitable playoff run, he’ll be good to go.

Bogardus was a second-team all-region punt and kick returner at Horizon last year, averaging 28.4 yards per kick return with a 97-yard touchdown. He rushed for 604 yards and 10 touchdowns for the Huskies. When he becomes eligible in Week 5, he’ll be in the backfield rotation with senior Josh Baxter (5-10, 200) and several others.

Shivers started as a freshman at Red Mountain, where he was honorable mention all-region with 14 tackles and an interception. Florida State has made him an offer.

One of the nation’s top high school coaches has an abundance of riches at his disposal this fall as Mohns — who earned his 100th career victory last season — leads the Sabercats into their first season as a 5A school after dominating the 4A ranks.

Since 2006, Saguaro won four 4A Division I titles, three Division 3 championships, a Division 2 title and three consecutive 4A state championships from 2016-18. Last year, the Sabercats qualified for the inaugural Open Division playoffs and lost to Chandler in the final — the program’s first loss to an in-state opponent since Week 3 in 2015 against Pinnacle.

Saguaro boasts three of the state’s top four recruits, all having committed to Power 5 schools over the summer, and one of the deepest junior classes in the country, with five top-25 recruits.

Some teams struggle to find a starting quarterback. Mohns has two Power 5-caliber signal-callers from which to choose. He can’t go wrong with Docekal or Werner under center. They could end up in a timeshare, or Werner could become 5A’s premier tight end while catching spirals from the younger Docekal.

No matter how that battle turns out, anything less than a top-three seed in the Open playoffs would have to be considered a disappointment.