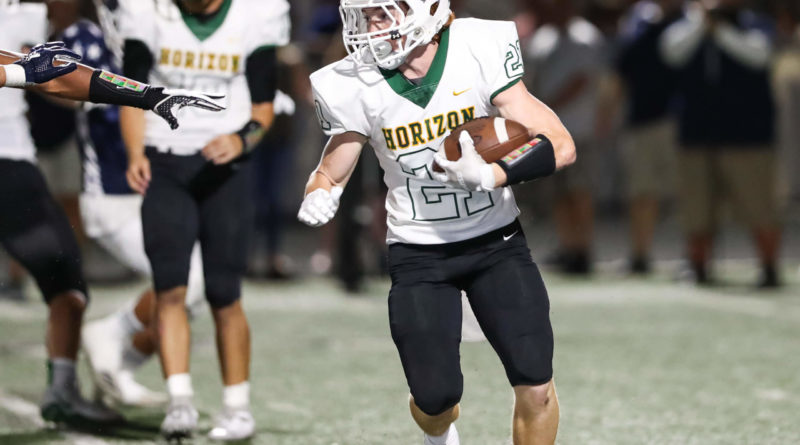 SBLive Arizona will preview several of the top football teams in the state leading up to the 2020 high school football season. Here’s our look at the Horizon Huskies of 5A Region 1 (East).

With conference player of the year Jake Martinelli now at D-II South Dakota School of Mines and Technology and backup Canyon Funk, who took over when Martinelli had his season end with a knee injury in Week 8, both graduated, the job is open for Boxwell, last season’s JV quarterback who received action late in the Huskies’ Open quarterfinal loss to Saguaro. He’ll battle junior Skyler Partridge for the starting job. “Drew and Skyler are neck and neck right now,” Wisdom said. “Both have great potential.”

Lambert was a second-team all-region selection at strong safety last year, when he had 31 tackles (two for loss) and three interceptions. He also was an efficient receiver, making 27 catches for 434 yards and eight touchdowns. He rushed for 82 yards and a score on 11 carries. “He is the jack-of-all-trades and the leader of the team,” Wisdom said.

Gross earned second-team all-region recognition as a sophomore after hitting on 51 of 52 PATs and making all eight of his field goal tries with a long of 43 yards.

With Bogardus having transferred to Saguaro, Broyles (52 carries, 242 yards, four touchdowns in 2019) is expected to become the workhorse back this fall.

Klopfenstein learned behind all-Arizona tight end Jay Rudolph (now at San Diego State) last year and appeared in several games, making three catches. His size and sure hands should make him a recruiting prize and favored target. “He has phenomenal hands and is a great blocker on the edge,” Wisdom said.

Overshadowed a bit last season by the presence of two all-region linebackers playing alongside him, Mumford will not be ignored this fall. He was third on the team in tackles last year with 58 (three for loss), the most among returning players. “He has a knack for the ball,” Mumford said. “He’s great against the pass and the run.”

He’ll start for the second consecutive season at left tackle. “Erich has great feet,” Wisdom said. “He is the leader of our offensive line.”

A transfer from Proctor in Utica, N.Y., where he had 30 tackles (12 for loss) in seven games as a sophomore. “He will be a problem with his strength and quickness,” Wisdom said.

Chawki was stuck behind two Division I players last year but still had 24 tackles and three sacks. “He will have a breakout season on the edge,” Wisdom said.

Markovich missed all of last season with an injury but should make his mark this fall. “He’s very long and can play sideline to sideline,” Wisdom said.

A three-year starter on defense, Mursalat had 17 tackles (five for loss) as a junior. He’ll also receive time on the offensive line. “Elijah has great hands and quickness off the ball,” Wisdom said.

Wisdom took over a team that was winless in 2015 and in four years transformed the program into an Open Division playoff qualifier.

The Huskies certainly can make another run at the Elite 8 bracket on the backs of their two lines, which Wisdom called the obvious strengths of this year’s team.

Santiago adds another lineman to the defensive front, where Chawki and Mursalat return after playing in the shadows of players such as Kyle Lewis (63 tackles, 11 for loss, six sacks), who signed with Army in February.

Behind them, Mumford and Markovich will be playmakers at linebacker, while two-way standout Lambert leads the secondary.

While each has promising replacements, it might be too much to expect Horizon to return to the Elite 8 — but qualifying with a high seed to the 5A playoffs and earning the program’s first playoff win since 2006 would be a nice consolation prize.

After Lambert, no other receiver coming back had more than three catches, and Broyles is the only true back who received double-digit carries last season. Developing depth behind them will be key to the Huskies’ chances.

“We lost a senior class that had great leadership across the board. We’re still trying to find guys who will step up and take the reins.” — Ty Wisdom