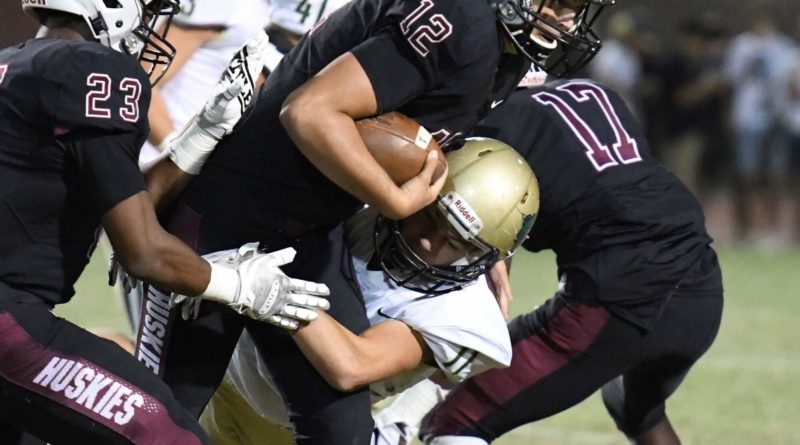 SBLive Arizona will preview every 6A football team in the state leading up to the 2020 high school football season. Here’s our look at the Basha Bears of 6A Region 5 (Central).

Williams won a four-way battle over the summer against junior Josh Sink (6-1, 200), who started the final four games last season, and two others. “Demond is extremely athletic, has a great football IQ for his age and shows great poise as well,” McDonald said. “He’s a truly special talent for years to come.”

A second-team all-region defensive back, the New Mexico commit (No. 32 on the 247Sports statewide recruiting list) made 37 tackles (2½ for loss) and broke up 15 passes as a junior. He should see more reps at running back, where in limited action, he had 29 carries (7.4-yard average) and caught 18 passes for 181 yards and two touchdowns. “One of the better pure athletes in the state,” McDonald said. “He’s explosive and can change the game with one reception or carry.”

The all-region honorable mention pick is the top returner in the backfield (55 carries, 280 yards, two touchdowns) and had 56 tackles (eight for loss, 2½ sacks) and 10 hurries. “One of the leaders of this team, he will be counted on to produce both ways,” McDonald said. “He will have an opportunity to showcase his skill set at running back.”

Camacho made his biggest impact on defense, earning all-region honorable mention after leading the team with 81 tackles (five for loss). He filled out his frame during the offseason, adding about 25 pounds of mostly muscle to ready for his senior season. “He’ll be counted on to be one of the defensive playmakers for the team,” McDonald said. “And, he’ll contribute offensively at wide receiver again.”

Durand, honorable mention all-region as a freshman, was a starter from Day 1. He received an offer from New Mexico over the summer, and after growing three inches and bulking up by 40 pounds, he should start hearing from more colleges soon enough. “He’ll be one of the top offensive linemen in the region as a sophomore,” McDonald said.

Bass was an honorable mention all-region selection last year after converting on 26 of 31 PATs.

Milkovic transferred from Hamilton, where he had 36 tackles, four sacks and nine hurries in spot duty as a freshman. Like Durand, he has an early offer from New Mexico. “An extremely explosive athlete with a lot of power,” McDonald said. “He plays with great motor and effort and is a weight room junkie who worked extremely hard this offseason.”

McDonald will ease Lockhart into the lineup (if you can call starting a freshman at corner “easing”) but plans to use him more on offense as the season progresses. “A physically gifted athlete who has a great work ethic and doesn’t shy from competition,” McDonald said.

Green will take over a leadership role on the offensive line. “A very hard-nosed football player who enjoys line play and everything that comes with it,” McDonald said.

Pennington saw limited action last season, finishing with 10 catches (one touchdown) for 116 yards, but he’ll move into the starting lineup, where McDonald has high expectations for him. “I think he has a chance to be one of the top wide receivers in the region,” the coach said. “He is extremely long and rangy, has a nice, quick burst for his size, and is a physical blocker who can go up top and get it with his 6-3 frame.”

Bachmann, who had 11 catches for 145 yards and two touchdowns as a backup last season, will figure significantly in all three phases this year, adding kick return duties to his resume. “A quick-twitch athlete who can go the distance anytime he touches the football,” McDonald said. “He’s very explosive and powerful for his size.”

Earls missed all of last season with a collarbone injury but offers Williams a big target down the seam. “He moves well and is long, with great feet and lower body base,” McDonald said. “He worked extremely hard this offseason bulking up.”

Redistricting certainly helped the Bears, who moved from a region including Chandler, Hamilton and Brophy Prep into one where they’re a better match. After starting last season 4-0, they lost their last seven, all by double digits.

They have some pieces around which they can build a team that challenges for a region title and gets back to the 6A playoffs. They qualified as the No. 11 seed last year.

Foremost on that list is two-way standout Barney, one of the better cover corners in the region who broke up 15 passes as a junior and earned a scholarship with New Mexico.

Jones’ production increased down the stretch last season, and he had 106 yards and a touchdown on 23 carries in the playoff loss to Desert Vista.

“We have speed on offense and in the secondary,” McDonald said. “Our overall team strength has really improved, and we should be a more physical team.”

After Friend suffered a season-ending knee injury in Week 4, the Bears tried several replacements, eventually turning to junior Josh Sink in Week 8. He made four starts, and despite going winless, he held his own, finishing 68 of 142 for 566 yards, two touchdowns and seven interceptions.

Sorting out the quarterback situation proved the biggest job McDonald and his staff had getting ready for Week 1 at Shadow Ridge. They settled on Williams after his performance in the team’s second intrasquad scrimmage.

“It was neck-and-neck with Josh, who had a good preseason as well, but we decided to go with the young gun,” McDonald said. “He’s extremely athletic, his arm is live and pops, and he was grasping the offense very well for his age. We just wanted to see how he handles live situations such as scrimmages, blitz pickups, to see how he responded.

“We’re excited to see what he can do.”

Williams will be throwing to a new starting receiving corps, with Pennington and Bachmann — who combined for 21 catches and three touchdowns in secondary roles last year — now counted upon to come up big this fall.

If the Bears can answer questions about the passing game, they could contend for one of the final 6A playoff spots and gain experience for a talented group of freshmen and sophomores. But with only eight playoff spots up for grabs this fall, that could turn into a tall order.

“We’re a young team, but we have some real talent. We’re going to get better as we gain experience from each game. I don’t see why we can’t be a playoff team and make a run.” — Chris McDonald