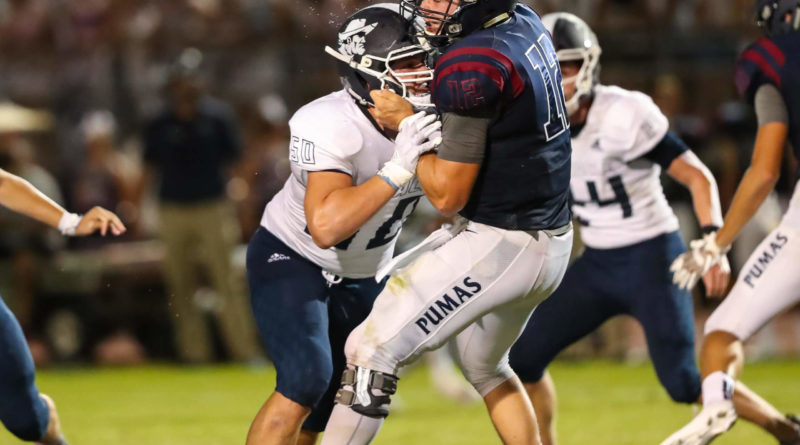 SBLive Arizona will preview every 6A football team in the state leading up to the 2020 high school football season. Here’s our look at the Pinnacle Pioneers of 6A Region 1 (Desert Valley).

Dampier took over the offense in Week 10 when senior JD Johnson’s career ended because of a heart issue. After going 11 of 16 for 198 yards and four touchdowns in his first start against Boulder Creek, he had a rude awakening in the Open Division quarterfinal loss to Salpointe Catholic — 12 of 26 for 107 yards and an interception. The previous freshman quarterback to start at Pinnacle? Spencer Rattler, now a redshirt freshman who grabbed the starting job at Oklahoma. “You can tell he worked his butt off in the offseason,” said offensive line coach Paul Germinaro. “He’s lightning-quick on his feet and has a developing arm.”

Singer, a transfer from Tartan in Oakdale, Minn., was an all-Metro second-team selection by the Minneapolis Star Tribune after catching 35 passes for 813 yards and 14 touchdowns as a junior. He intercepted five passes. The three-star recruit, who vaulted to No. 11 on 247Sports’ statewide rankings, has received offers from Air Force, Eastern Michigan and Iowa State, among others. “He comes as billed,” Germinaro said. “He has incredible body control and runs phenomenal routes.”

A second-team all-conference selection a year ago, Franklin led the Pioneers with 15 tackles for loss and nine sacks among his 47 total tackles. The relentless worker has offers from Duke, Stanford, UNLV, Colorado State, Army and Air Force. “He’s got a phenomenal skill set,” Germinaro said. “He has a variety of pass rush moves, can close space quickly, and has a motor that just doesn’t quit. He’s the real deal.”

Ament is the top returner in the backfield, having rushed for 224 yards and a touchdown on 33 carries as a junior. “He’s bided his time, waiting for his opportunity,” Germinaro said. “He’s an excellent inside zone runner, very fast, very long. We’re looking for him to have a good year — and we need him to.”

Germinaro coached the tight ends last fall and got to work with Robinson, 247Sports’ No. 2 state Class of 2023 recruit and a four-star with an Arizona State offer, and the coach couldn’t stop raving about the sophomore. Robinson had a breakthrough game against Eastside Catholic before having his season derailed when he broke a small bone in his hand. “He’s a freak and such a joy to coach,” Germinaro said. “The best thing about him is his energy and enthusiasm. He just loves playing football.”

Maroney has battled knee injuries throughout his career, but he’ll start in the middle of the Pioneers defense this fall. “He’s a run stopper, a real spark plug for us,” Germinaro said.

Hall will line up just about anywhere on offense, getting the ball in both the run game (17 carries in 2019) and passing game (three catches).

Guarino is one of the smartest players on the team (4.6 GPA) and also a lacrosse player. He returns as the starting right tackle and will be in the rotation on the defensive front. “He’s a very talented kid and should be an impact player,” Germinaro said. “We need to get him loose and do a lot of damage.”

LeBlanc is a two-year starter who recently was named an offensive captain. “We lean on him to set the tone for us along the line,” Germinaro said. “He’s a technician. His technique in pass protection is phenomenal, and he’s becoming a road grader in the run game.”

A third returning starter on the offensive line, Bernardo has displayed plenty of improvement in the offseason and is perhaps the team’s best run blocker. “Just a real hard worker,” Germinaro said.

He shared kicking duties with Jansen Malvick last season. Miller’s job was to kick field goals, and he went 10 for 14 with a long of 45.

The Pioneers qualified for the Open playoffs last year as the No. 5 seed but had to throw their freshman quarterback into the fire against Salpointe Catholic.

“It was pretty overwhelming for him,” Germinaro said, and Dampier acknowledged feeling nervous about the assignment. He looks to apply some lessons from that game into his sophomore season as he battles junior Zack Wren (6-1, 175) for the starting job.

“Being with my team, being down in those situations, learning to move forward and staying together as a team,” Dampier said. “My teammates definitely put me under their wings in that game and told me they’ve got my back.”

Dampier thrives in the speed option game and is proficient with RPOs, whereas Wren is more of a pocket passer. Whoever starts Week 1 will have plenty of weapons as Pinnacle tries to return to the Elite 8.

“We’ve got a lot of kids who can do damage,” Germinaro said. “You can’t take just one thing away from us offensively.”

A 14th consecutive playoff appearance is certainly a realistic finish to the season, but whether the Pioneers get back to the Open Division or end up a top seed in the 6A bracket likely will come down to two factors.

The first is in Germinaro’s hands to some degree, as he sorts through four contenders for the two starting jobs available on the left side of the offensive line.

“We’ve got some big shoes to fill,” he said. “We don’t want to rush them, but with limited practices and contact, we won’t see until we scrimmage how we’re jelling.

“If we can protect Devon and block for Anthony, we’ll have success, but definitely, we’re a question mark.”

The second is how the nine new starters on defense come together around the two building blocks in Franklin and Haynesworth.

“We have a lot to prove this year,” Dampier said. “I think people are overlooking us a bit, but if we come together as a team, make sure we have each other’s back, we can be a really good team.”

“We need a lot of our younger kids to find success and build confidence early. As long as they learn quickly and adapt to playing on Friday nights, we’ll have a lot of success.” — Paul Germinaro